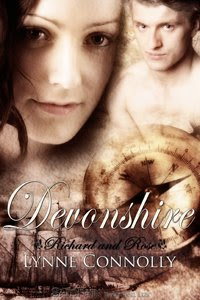 My latest release, "Devonshire," is the second Richard and Rose book, and deals with Rose's home county, which at this period was a haven for smugglers.
In this era, the 1750's, smugglers were very different from the smugglers of myth and legend, the "freebooters," the "gentlemen" who gave tea to the poor and supported the liberties of the downtrodden masses. Nothing could be further from the truth.
One of the first historical series I ever read was the Russell Thorndike "Dr. Syn" stories, where a pirate turned smuggler becomes the Vicar of Dymchurch, and protects the people while keeping a romantic secret to himself. So it was a bit of a blow to learn that smugglers weren't like that at all.
Think Chicago in the 12920's. The big smuggling gangs were the curse of the coasts of Britain. They bullied, they ran districts like petty lords and they coerced the populace into taking part in the activities, or at the very least, harbouring smuggled goods. Crime lords, something like the characters in "The Long Good Friday," or in real life, the Krays and the Richardsons.
The Hawkhurst Gang were the most famous, for all the wrong reasons. They ran the south coast around Romney Marsh, where Thorndike set his stories, and they controlled all the contraband that came through the district. The gang was eventually brought down by its extreme brutality, when the local populace turned on them and joined with the militia to round them up.
Against them were the Customs and Excise Departments, separate entities in this period. Woefully 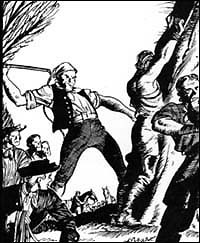 understaffed and underpaid, these people often took bribes to look the other way, or even collude in the importation of illegal goods.
During the Napoleonic Wars there were fears that the smugglers were importing more than tea, lace and tobacco. They could also be bringing in spies and hostiles. That, together with the more important financial considerations, led to the diminishing of smuggling.
The real kicker was the excise. The Georgian government insisted on putting high taxes on some goods, so much that at one point it was assessed that two thirds of the tea drunk in Britain was smuggled goods. Despite constant pressure to reduce duty, with the reasoning that what they lost on high percentages, they'd gain in quantity, the government held out until William Pitt finally began the reductions that were the real death knell of the highly profitable smuggling gangs, slashing the duty on tea in 1784. From then on, increased effort in catching the smugglers and dwindling profits saw the end of the organised gangs.
And so I had to plunge Richard and Rose in the middle of that, didn't I? They face smugglers, betrayal and capture, so although they're now a couple heading for their wedding day, it becomes increasingly doubtful that they'll actually reach it.

Interesting post, Lynne. The smuggling gangs were the ruthless gangsters of their day. I loved the reseach on smuggling needed for the Loveday books and Adam's arch enemy the smuggler Harry Sawle made a great ruthless adversary ruling by fear and I had great satisfaction finally bringing him to justice in The Loveday Revenge.
I look forward to reading Devonshire it sounds a fantastic read.