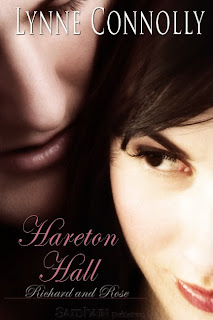 I have a new book out this month. It’s the next Richard and Rose. This series, which started as a labour of love for me, has become my “flagship” series, the one I’m best known for. I’m still not sure how that happened.
When I started Richard and Rose with “Yorkshire,” it was with a vague idea of publication, but mostly to tell the stories of the people who had been haunting me for years. I first “saw” them in my mind’s eye standing in a dilapidated courtyard, Richard wearing a gorgeous outfit more suited to London, his painted face a mask of hauteur, and Rose, in an outdated riding habit, slightly dishevelled from her long journey. Where they’d come from I had no idea, but I knew where they were and where they were going, because they’d fallen in love at first sight.
I was rather surprised, as I wasn’t sure I believed in love at first sight, but this couple had certainly achieved it. And without either of them wanting it, either. Richard is sure, but Rose thinks he’s not serious at first, although she can’t believe the intensity of her feelings for him.
I wanted to write about a couple’s developing relationship, not just meeting and falling in love, but marrying, maybe having a family, getting on with their lives. Marriage requires a lot of hard work, but it’s so worth it, and I wanted to celebrate it through this couple’s story. I’ve just finished writing book seven, and I haven’t finished yet, although Richard and Rose will probably take a break after book eight.
“Hareton Hall,” originally titled “Darkwater” chronicles what happens when Richard and Rose go back to her home county of Devonshire (we call it Devon today) to attend the wedding of her beloved sister Lizzie. They meet far more than they expect, or want to, and old enemies appear, along with new ones.
Writing about their lives has mean ta lot of research, and I’ve learned a huge amount about life in the 1750’s. This is my favourite part of the Georgian era, and most of my historical romances are set there.
Anyway, without further ado, here are the details and a snippet of “Hareton Hall,” which comes out in e-book format on the 20th July. It’s out in print next year.

The coach jolted as the driver pulled on the reins to stop the horses so abruptly I was thrown forward, but I saved myself by seizing the strap above my head.
My husband grabbed me by the waist and restored me to my seat before he glanced out of the window. “It appears we’re being held up.” His voice sounded calm, but I knew him better than that and I noticed his note of alarm.
“What? Highwaymen?”
Almost without thinking I took off my ruby betrothal ring and slipped it down the front of my dress, but when I tried to take off the wedding ring, Richard put his hand over mine. “No. He’ll expect to see a wedding ring, and if he doesn’t find one he might go looking. I’ll buy you twenty more, but let that one be.”
I saw the sense of that and did as he bade me. Richard reached up and took the pistol that hung in its holster above us. He thrust it into his coat pocket then spoke over the shouting that was going on outside. “Give him your purse and anything else of that nature he asks for. If he tries to go too far—I’ll deal with it.” He gave me a smile of encouragement as the door was wrenched open.
Cold air rushed into the coach. A figure swathed in a greatcoat with a muffler covering most of his face stood silhouetted against the rain-spattered hedge and trees. He’d pulled his hat well down and had a pistol in each hand. His eyes were grey, but I couldn’t see any more of his face.
I’d never gone through this experience before, but I’d read a lot about it in the papers. The country was currently at peace, the army mostly disbanded, and many disaffected soldiers had taken to crime. Highway robbery was on the increase, together with housebreaking and shoplifting, but we were usually better protected than this and hadn’t been touched before. I could only thank God that our daughter and her entourage were a few miles behind us.
The man gestured, one pistol jerking towards us. “Get out.”
Richard climbed down and held his hand out to help me down, then took a position slightly in front of me, shielding me as best he could.
The two postboys stood by the front of the vehicle. The robber kept one pistol trained on them and one on us, but when he moved we saw he had more flintlocks thrust into his belt.
“Your valuables, please. One person at a time.”
He moved to the postboys and I examined him closer. He was a little shorter than Richard, and that glimpse of the weapons shoved into his belt also showed me his figure was actually quite slight. He might be young, but then highwaymen rarely lasted very long. They worked alone or in pairs, vulnerable to a determined person.
He took the watches and purses the postboys offered him without demanding more, and moved on to us. Richard silently handed him his watch and some guineas from his pocket. He wasn’t wearing the diamond solitaire pin he used at his neckcloth, for which I was thankful. I’d have hated to see that go.
I gave him my purse and the necklace I wore, part of an agate set I hadn’t owned for long. He pointedly stared at my hand, and reluctantly I slipped off my ring. It was a plain gold band, but it had been engraved inside for me. I was sad to lose it, but Richard was right. It wasn’t worth risking injury or abuse for. I handed the ring over, trying not to touch his hand. Highwaymen sometimes took more than items of monetary value. Rape and beating weren’t unusual. Richard would kill him if this man attempted that with me.
I tried to meet his gaze steadily, although inside, fear was turning my stomach.
“There’s more. Your pockets, if you please.”
I’d hoped to keep it from him. Unlike some people, I didn’t carry two purses, one for the robber and another for me, so I had my handkerchief, my necessaire and the watch Richard’s brother, Gervase, had given to me, which was a fine item, a French enamelled repeater set with gems, but it wasn’t the value I’d miss. Gervase had bought it for me in Venice in thanks for the help I’d rendered him there.
Reluctantly I handed the highwayman the watch. He turned it over in his palm to see both sides of the pretty toy. “Thank you. You can have this back.” He gave me my wedding ring.
It hurt to thank the man who had just robbed us, but I managed it.
He indicated a space away from the coach with the pistol he carried in his left hand. “Move over there.”

Posted by lynneconnolly at 7:46 PM

This extract is pretty amazing, I got really excited, please let me know soon when it will be released in the UK.

I enjoyed this. The arrival of the highwayman has a real air of menace about it.

Thank you! It's out soon, on the 2oth, and here's the Samhain link:
http://samhainpublishing.com/coming/hareton-hall
It's out first in ebook, then in print later, so it'll be available pretty much worldwide next week.
And yes, I'm excited. I could give Dame Celia Molestrangler a run for her money right now.