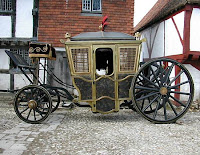 It’s the summer and my thoughts if nothing else are turning to travel. I’m very fortunate in that I have visited lots of countries and read up on something of their fascinating history. I’ve driven across Africa, sailed to the North Pole (or as close as we could get) and camped in the Arabian desert. I’ve had some adventures. And that was in the late twentieth and twenty first century with sophisticated maps and global positioning systems all designed to help a traveller on her way.

I don’t mind admitting that if I had been born in the late eighteenth or early nineteenth century I am not sure that I would have been as much of a traveller. My spirit would probably have been curious but whether I would have translated that curiosity into action is quite another matter because in that period it was not really the done thing for ladies to travel - unless they were following their husbands, of course.

There were some adventurous exceptions to the rule, and I came across one in the shape of

Elizabeth, Lady Craven. Elizabeth was a woman who travelled beyond the more fashionable countries of Europe at a time when it was very unusual for any lady to do so of her own accord as a private individual. But then Elizabeth Craven was something of an original. Born in 1750, Lady Craven was a society beauty, famous for her published plays and her apparently excruciatingly bad verse and equally famous for her indiscreet love affairs. In 1780 she left Lord Craven and went to France, settling for a little in a house near Versailles. She did not like to stay in one place for long, however, and between 1783 and 1786 she travelled extensively around France, Italy, Austria, Poland, Bulgaria, Russia, Greece, and Turkey. Sometimes she journeyed in comfort in her liveried coach, accompanied by servants. Sometimes she rode side-saddle and alone.

In 1787 Robert Walpole suggested that Lady Craven publish an account of her travels, and A Journey through the Crimea to Constantinople appeared in 1789. In it Lady Craven describes manners, customs, and landscapes, pronounces Lady Mary Wortley Montagu's favourable account of Turkey a forgery, and constructs a self-image of redoubtable British vigour. A second edition appeared in 1814.

Lady Craven returned to live in England after the death of Lord Craven but the wanderlust was evidently in her blood because after her second husband died in 1806 she set off again, travelling to Germany and from there to Revolutionary France (Where she was accorded safe passage by Napoleon himself) and to Italy. She finally settled in Naples where, in her last years she was described “working in her garden, spade in hand, in very coarse and singular attire, a desiccated, antiquated piece of mortality, remarkable for vivacity, realising the idea of a galvanised Egyptian mummy,” a striking if not particularly flattering image of the old English aristocratic lady abroad!

Do you think you would have enjoyed travel in the late eighteenth/early nineteenth century? Would you have ventured abroad alone?
Posted by Nicola Cornick at 10:47 AM

I love hearing about these intrepid ladies - I agree with you, Nicola, I think I might not have been quite so adventurous and keen to travel in those days.

Elizabeth sounds a fascinating lady (and even the last sighting of her aren't that bad - at least she was still living life, desiccated or not!)

She sounds quite a woman. She obviously had intelligence as well as beauty for she counted Dr Johnson, Bowell and Horace Walpole among her friends, and Dr Johnson certainly didn't suffer fools gladly.

Love your posts Nicola, they provide such a wonderful insight into the past. She sounds like a true free spirit and as a modern woman looking back I applaud her for that.

However, for someone who gets car sick on windy roads as well as seasick, I think travel back in those days would have been a nightmare!

Kiwifruit & Cheese said...
This comment has been removed by the author.
5:36 PM

Kiwifruit & Cheese said...
This comment has been removed by the author.
5:37 PM

Those women were extraordinary, weren't they, Sarah. I like to think that I would have been as intrepid about venturing off into the unknown but somehow I doubt it! Perhaps a part of it was that they had such self-confidence bred into them that they assumed eveything would go well and they would be welcome wherever they turned up!

Yes, I think she was a clever and an interesting woman, Elizabeth. Her memoirs are fascinating. She called herself "the beautiful Lady Craven." No shortage of confidence there!

Thanks for dropping in. Kim. I am so pleased you enjoyed the post. Every so often I come across women in my research who had decidedly modern attitudes in some ways. Elizabeth Craven is one and Harriette Wilson another.

I think these women were amazing. I could not see myself being as aventuress at their time.

I think you are amazing too with your adventures.

Love to travel now but only to "safe" places.

I wonder where people get the idea of "shrinking violets" these women don't come anywhere near that.

An amazing woman, Nicola. That sort of spirit has inspired so many down the centuries. Thanks for the post!

Maybe the sort of people who criticised these women as "wayward" wanted them to be shrinking violets, Margaret, but as you say they were anything but!

I'm glad you liked the post, Christina. Elizabeth Craven was what I think they would call a "redoubtable" woman!

We are Tours Operator in Turkey cultural group and private tour programs in istanbul and Turkey. Private and Regular short tour packages in Cappadocia and in Turkey .Private shore excursions in Ephesus and Istanbul http://www.packagetoursturkey.com - http://www.touroperatoristanbul.com Our tours are professionally guided, intimate, and safe Istanbul Turkey are great destinations for a wonderful holiday! with their perfect service form TTG Travel Agency competitive prices for the great services and local knowledge that make their holidays really special.