A Ghost story for New Year 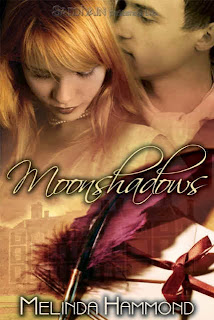 I don't know about you but I love the ghost stories that abound on British TV at this time of the year, spooky little tales that make me shiver and look around into the dark corners of the room (but somehow never stop me from sleeping).


I thought this New Year you might like to read one of the spooky episodes from my own dual-time ghostly romance, MOONSHADOWS.  This scene starts with my present-day heroine, Jez, in the churchyard, looking for the grave of her ancestor.....

“Well now, Thomas, what are you doing here, keeping this young lady sitting about in the cold?”
Jez jumped up from the bench at the sudden voice, relaxing only when she saw it was the vicar bearing down upon them through the gloom. He was beaming at them, but clearly intent upon leading her away. She went with him willingly, after muttering goodbye to the old man, who remained sitting on the bench to finish his pipe.
“Poor old Tom,” said the vicar comfortably. “Has he been telling you his tales?”
“Yes, he was telling me about his relatives.”
“Take no notice. He’s as mad as a hatter. Runs in the family, of course, but he’s harmless enough. He likes to potter around, so we pay him to cut the grass and do a spot of weeding around the graves, and he does a reasonable job, generally, although nothing will make him tidy up that far corner. Strange that. Did you find the stone you were looking for, by the way?”
“Yes. Yes I did, thank you. I—um—Thomas said there was a—a ghost in the churchyard.”
“Did he? Well, maybe he’s right. I’ve never seen it, but if Tom’s happy to believe it, we’ll let him carry on, shall we?”
Silently, she nodded, hunching her shoulders against the cold wind as they left the churchyard. The wind sighed in the trees behind them.
Ah, Sarah.

Sleep well, and may 2014 bring you everything you wish for yourself

New by Sarah Mallory for Feb 14,
LADY BENEATH THE VEIL - pub Harlequin Historical. 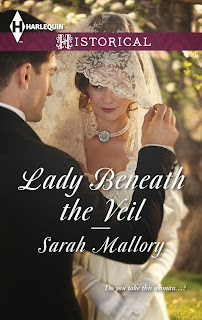