The Glamour of Italian Fashion

On Wednesday, I went to the Victoria and Albert Museum for the preview of their new exhibition: The Glamour of Italian Fashion 1945-2014, from 5th April – 27th July 2014,  sponsored by the Italian jewellers, Bulgari, with added support from Nespresso. 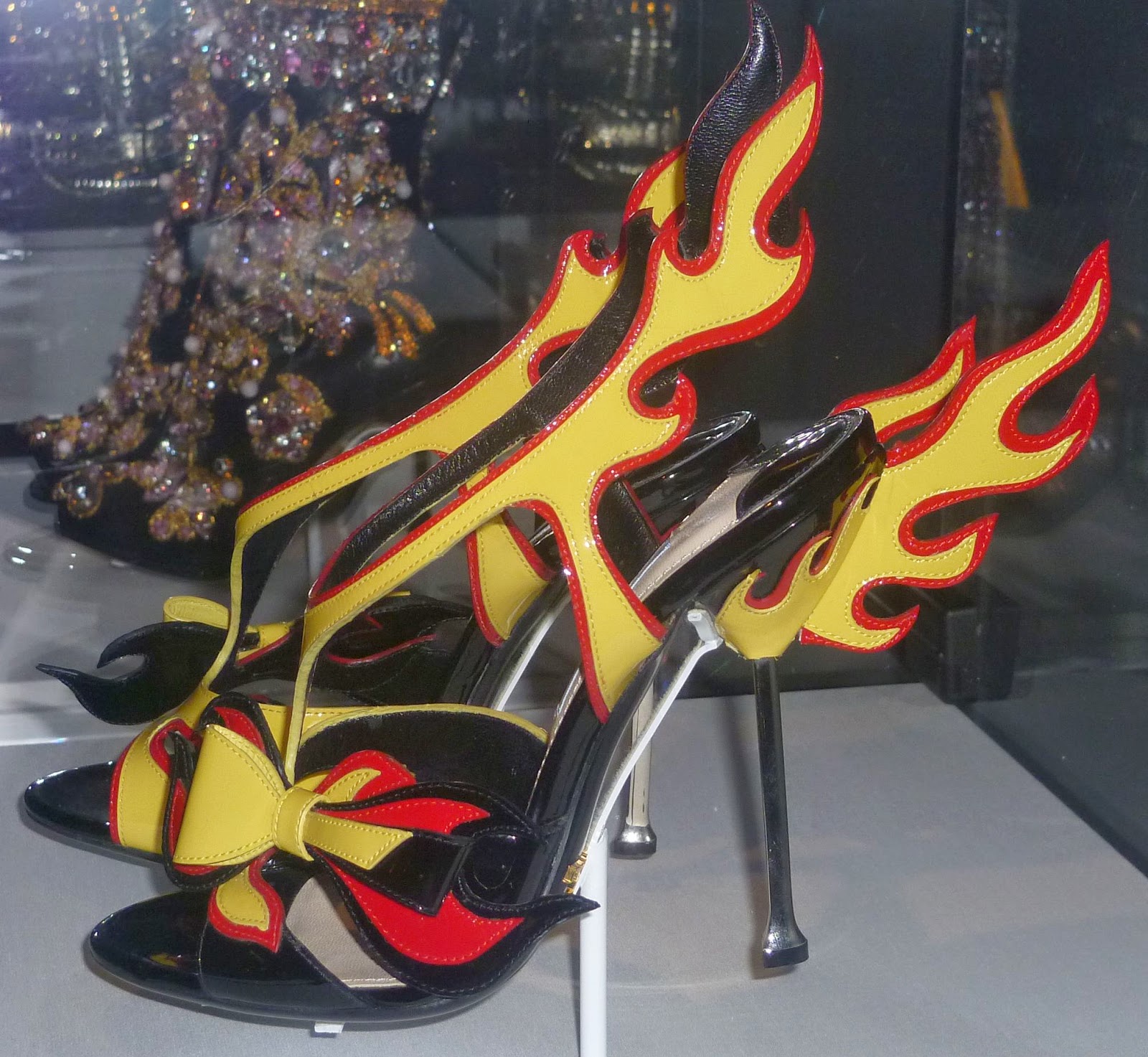 I arrived feeling frazzled by the London rush hour and desperate for a cup of coffee. Fortunately, outside the exhibition, Nespresso was offering us some. I know it’s not cool, but I don’t like my coffee strong so I asked, diffidently, for a mild cappuccino. He looked at me through narrowed eyes for a moment and then said, ‘Brazilian coffee. It’s very smooth. You’ll like it.’

I did. It was delicious! I made a mental note that, in future, Brazilian coffee will be my coffee of choice. 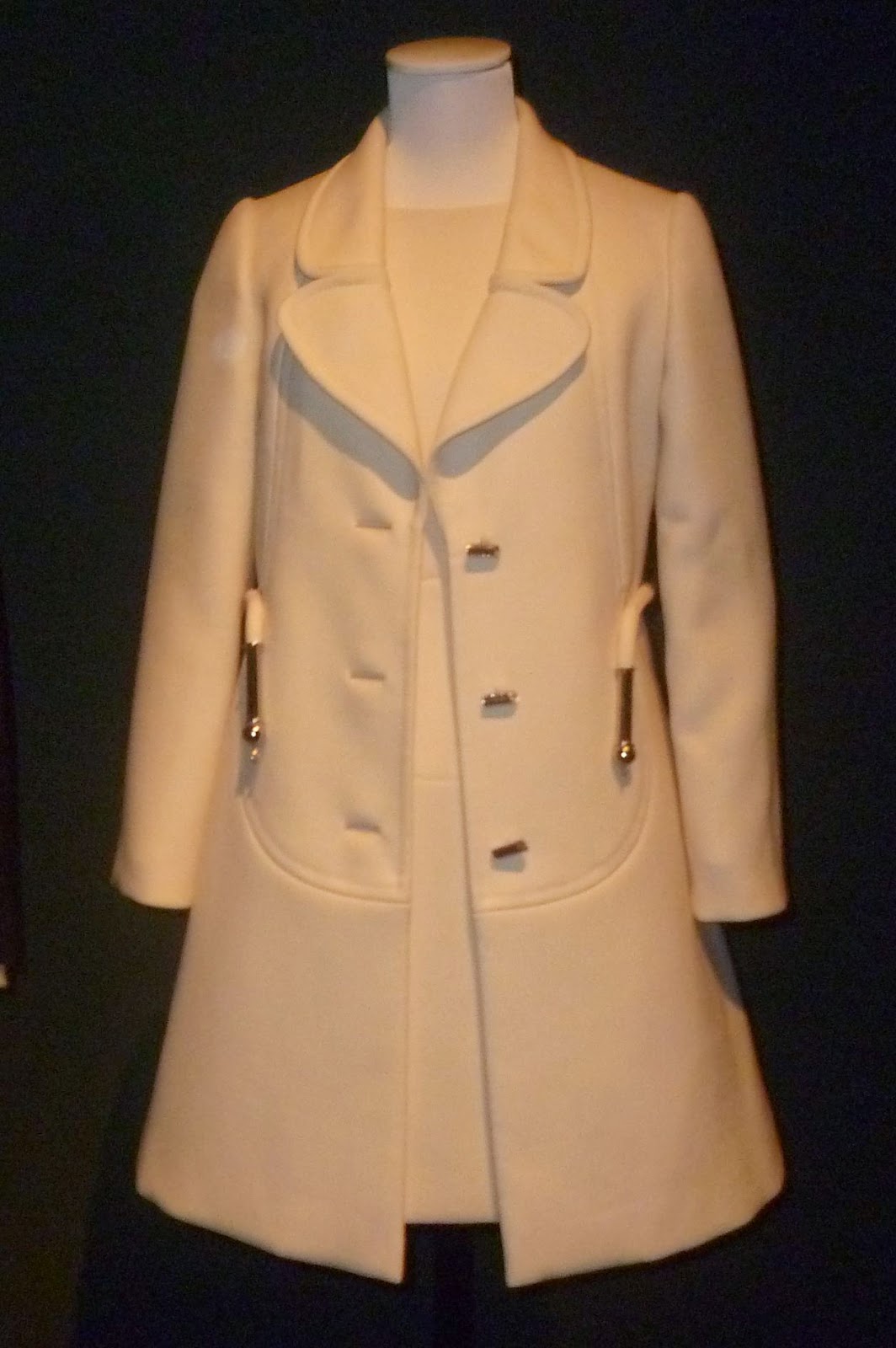 Rejuvenated, I went into the exhibition. My first thought was that I was in heaven; the clothes, shoes, handbags etc. were wonderful and, what’s more, they were raised up and properly spaced out so that you could see them properly. The lighting was just right, the signage was excellent and, on the walls above the exhibits, film clips and fashion photos added to the dolce vita ambience. The credit for all this must go to the curator, Sonnet Stanfill, who, in my view, has done a brilliant job.

The models photographed, particularly from the 50s and 60s, look like real young women with proper curves. They obviously enjoy life. You suspect that, for two pins, they’d hitch up their skirts, hop on the back of a Vespa driven by a sexy Italian wearing an impeccably-tailored suit, and zoom off. They are refreshingly different from our sulky, stick-thin 21st century models. 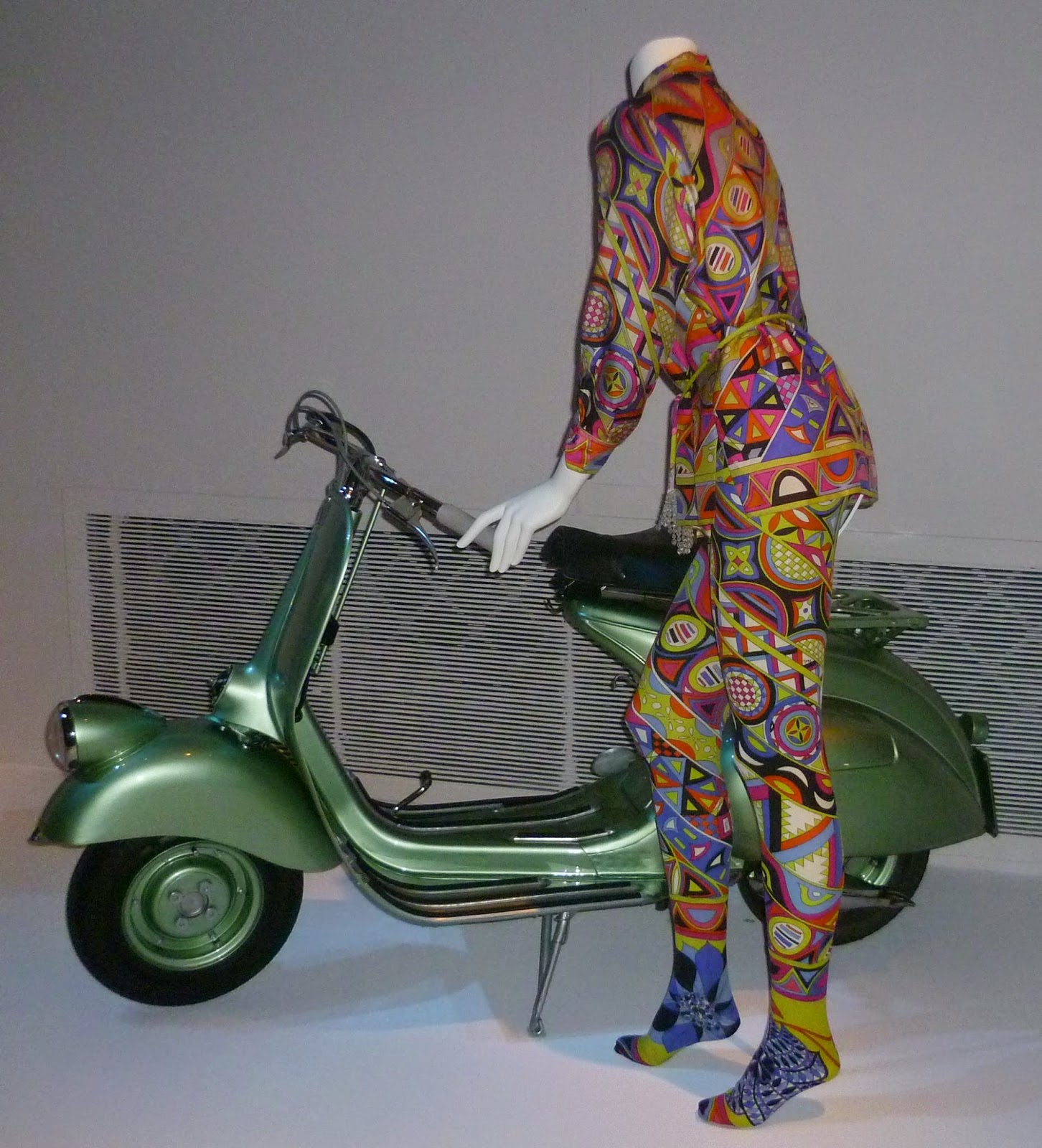 I particularly enjoyed the 50s and 60s rooms. The pièce de résistance is undoubtedly the fabulous Bulgari emerald and diamond necklace set that Richard Burton bought for Elizabeth Taylor. It’s rarely exhibited, so it is great to have a chance to see it. 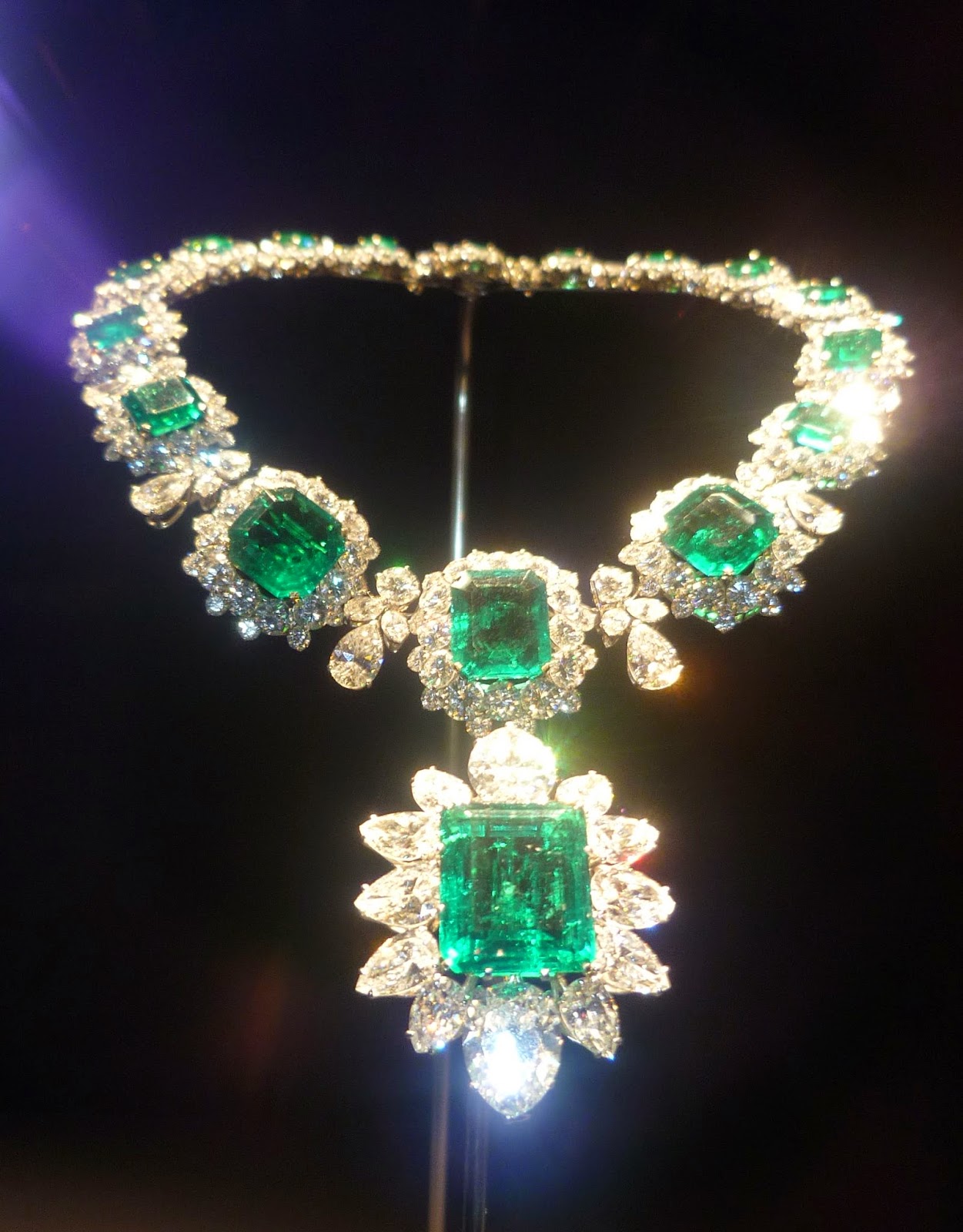 This was the era when Hollywood came to Rome and Cinecitta to shoot films like Roman Holiday and all the big names are here. I loved Audrey Hepburn’s Empire-line ball dress by Gattinoni (1955) from War and Peace, now, alas, rather faded. And there are superb examples, like Gianfranco Ferré’s elegant evening dress, or André Lang’s superbly-tailored coat, both from the 1960s, which demonstrate Italian technical expertise and flair.

The exhibition also has plenty examples from modern designers. You can admire Dolce and Gabbana’s dramatic, glittery 2001 ankle boots, or Prada’s 2008 flower-heeled shoes, for example. The last room is devoted to up and coming designers who have something new and exciting to offer. 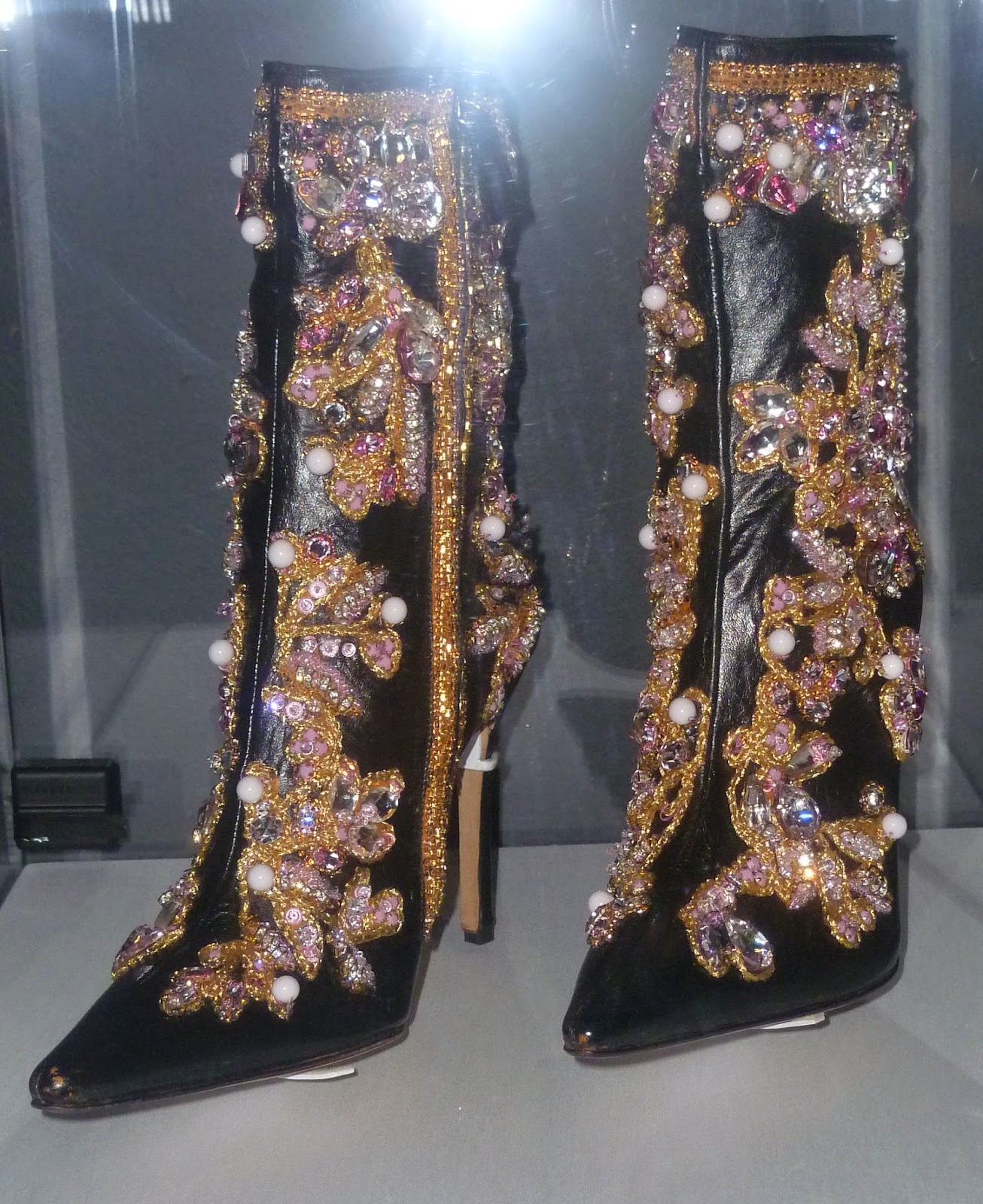 Above all, I just loved the elegant design and attention to detail of all the items on display; shoes and handbags as well as the clothes. There’s something immensely satisfying about seeing clothes by designers who are absolutely at the top of their game. The Italians can do anything, I decided; be it with leather, wool, silk, beads or embroidery. 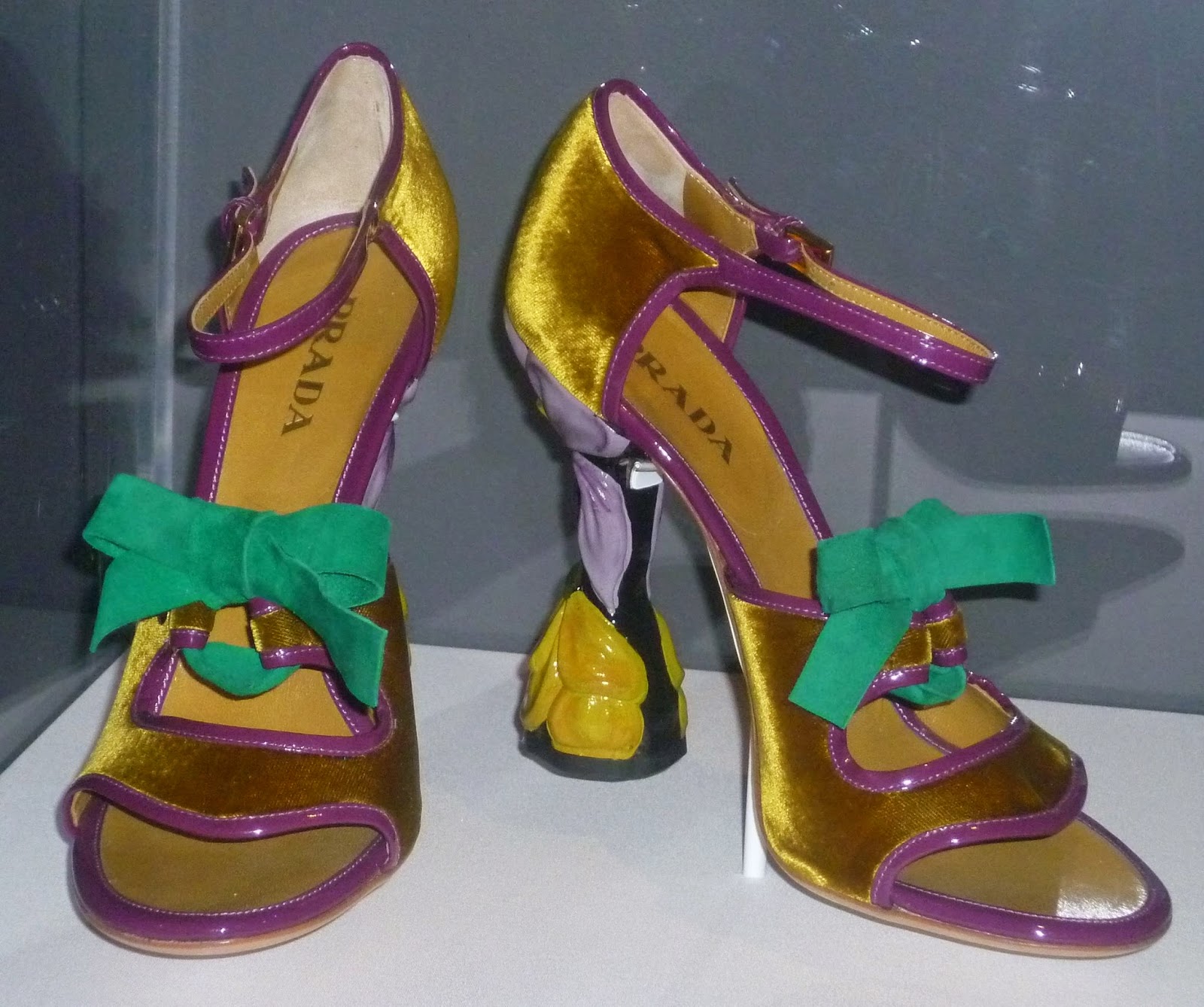 Often, after spending several hours in an exhibition, I reel out in a state of cultural exhaustion. This time, I left feeling energized. This exhibition is a real tonic. If you feel in want of a little glamour in your life – and who doesn’t? – get to the V & A. You won’t be disappointed.

Photos taken by Elizabeth Hawksley by kind permission of the Victoria & Albert Museum.

Posted by Historical Romance Author at 10:04 AM

You'll love it, Christina! It's right up your street.

There is also a fascinating film with various designers talking about the history of Italian fashion.

And the shop has some lovely things, too - but watch your credit card. They're very tempting.

What a fabulous exhibition, Elizabeth. Thanks for sharing the photos - they are the nearest I'll get to seeing it!

The first garments on show were two women's suits from the war years. In spite of wartime restrictions, their cut is superb and a number of small details turned them into something elegant rather than, as in England, having a garment which remained just a no frills suit.

For example, one of the suits, in a deep pink stripe, had its pocket cleverly cut into four triangles which met at a point in the centre, so that the stripes radiated out in four different directions.

It was Richard Burton who bought that fabulous piece of glitter for Elizabeth Taylor.

Thank you so much. What a stupid mistake to have made It just goes to show that you should always read your post out loud before you post it.

Wow! The glitz, the glamour - how could I have missed this exhibition? Will have to check it out.

Thank you for your comment, Henriette. Fortunately, you haven't missed it. It's only just opened.

This exhibition is a corker! There's something infectiously upbeat about it. You can tell that these clothes were meant to be enjoyed.