My husband has just returned from a blissful weekend at an agricultural show organised by Cornwall Tractor Club where his display of sixteen restored and working rotavators won him a trophy for the  best static working exhibit.  He's exhausted after three days of constant talking but is still wearing a delighted grin. 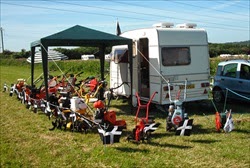 These shows feature machinery and farming practices from WW2 years when the Americans brought tractors etc to Britain so we could feed ourselves. In exchange they were leased land for thirty years on which to build airfields and missile sites.

One of the exhibits was a threshing machine that has been on the same farm for seventy years. The farmer's grandfather used it at every harvest. But father bought a newer machine and the old thresher was consigned to a storage barn. Now no one knows how to operate it so an important element of rural history has been lost.

The K-shaped winch is a hay-grab. During the two-day show, with a traction engine providing belt-driven power to the baler (see above) hay was gathered and baled. In the evening the bales were undone, the hay loosened, spread and turned, ready for the following day's demonstration. 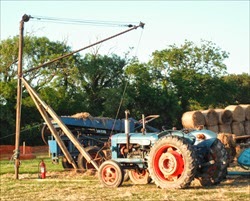 One of the oldest tractors was a Marshall. To start it requires a cartridge - similar to one for a 12-bore shotgun. This is inserted into the engine then hit with a lump hammer. The cartridge explodes, firing the single cylinder into life. In those days 'Elf & Safety' took second place to ploughing fields and reaping crops so Britain had enough to eat.

The orange vehicle is an Anzani tractor. Italian Alessandro Anzani,  (1877 – 1956) supplied one of his engines to Enrico Forlanini who developed it into a three-cylinder, air-cooled radial engine. One of these early engines, a 25 hp Anzani Fan type, was supplied to Louis Bleriot who used it on his successful crossing of the English Channel in 1909. Anzani diversified into motorcycle, lawnmower and outboard engines. 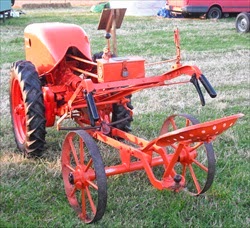 In the years following WW2 the company's main product was the 'Iron Horse' - a two-wheeled pedestrian-controlled ploughing engine and light tractor.

Compared to the farming machinery of today, these old vehicles look – and are - very basic. But the memories and stories they prompt when someone recognises an old tractor 'like the one grandfather had' bring the past alive in a way I doubt any air-conditioned, leather seated, luxury-cab combine harvester ever will.

Posted by Historical Romance Author at 6:00 AM

It sounds a fun show, Jane, and I can see that you had splendid weather for it.

I've always found old machinery fascinating - even if I haven't a clue what they are for or how they work. I think it's something to do with their 'human' quality; they often seem to have real personalities of their own.

The agricultural machinery you show are at the end of a very long line of industrial machines, dating back to the early 18th century in Coalbrookdale, and well within our area of interest.

Jane Jackson said...
This comment has been removed by a blog administrator.
8:11 PM

Thanks, Elizabeth. You're absolutely right about the machines having an almost human quality. But even more touching are the men who have saved them from the scrapheap. Having lovingly restored them, they enjoy showing them off like a fond parent! Many of the older men are widowers and the shows bring them together with others who share their passion. Ask a taciturn 70/80-year-old about his restored tractor and he'll beam. You'll probably get his life story and tales his father and grandfather did during both wars. It's priceless and often awe-inspiring.