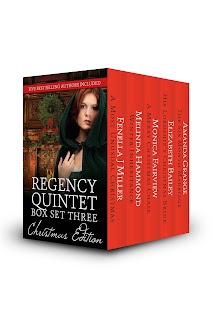 I'm delighted to tell you all that despite the fact that the weather is still mild, that Halloween and Bonfire Night have yet to come, the Regency Quintet Christmas Edition has been published. This is our third edition and we are all just a little excited about it. Not only does it have another beautiful cover, courtesy of Jane Dixon-Smith, but it also has three brand-new books within its covers. As the box set contains three new, never-before published books and two other brilliant stories, it's an absolute bargain at £1.99.

A Most Unusual Christmas, A Merry Christmas Chase and His Lordship's Christmas Bride were all written especially for this Christmas box set. Here are the brief blurbs for each book.

A Most Unusual Christmas by Fenella J Miller
Miss Cressida Hadley is delighted when Lord Bromley and his family are unexpectedly obliged to spend Christmas at The Abbey. However, falling in love with Lord Bromley hadn’t been part of her plan.

Winter Inheritance by Melinda Hammond
Governess Verity Shore longs for a little adventure, then Rafe Bannerman arrives to carry her off to Highclough and Verity discovers that life can be a little too exciting!

A Merry Christmas Chase by Monica Fairview
A penniless lady is caught poaching by a lord, but when she flees to her rich aunt’s manor, she finds the same man is her aunt’s house guest.

The Six-Month Marriage Amanda Grange
Desperate to escape her brutal uncle, Madeline Delaware enters into a marriage of convenience with Philip, Lord Pemberton. On the night of the Christmas fete they give in to their feelings but it is not until they vanquish a woman from Philip's past that they find the happiness they deserve.

This universal link viewBook.at/Regency5xmas will take you to your own Amazon.

I hope I've whetted your appetite for our Christmas Regency collection,

Still on the subject of Christmas, I also have a new Christmas story out that isn't in the collection.

Christmas at Castle Elrick is a Regency fairy tale, with Miss Verity Sanderson as  the beauty and Sir Ralph Elrick as the beast. He was severely injured in the Napoleonic wars and has been brooding in his castle for years waiting for Verity to reach her majority and come to him. Her father had promised his daughter to Ralph in return for his financial support. Verity decides marriage to a wealthy stranger is preferable to remaining with her step-mother and half-sisters and so she sets off, the week before Christmas, to become his wife. Castle Elrick is a cold, unwelcoming place situated on the bleak Northumbrian coast and Ralph and his small staff are not the only residents. Will Christmas be a celebration or will the ghosts of Castle Elrick force them apart?