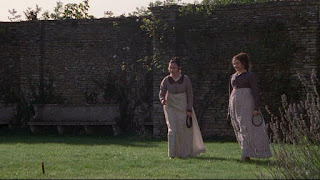 In this day and age of entertainment available at the touch of a button, it is hard to imagine a time when teenagers or even adults would amuse themselves with games that modern-day eight-year olds might find too childish for their taste. Yet we have romps, forfeits and blind-man’s buff in Charles Dickens’ ‘Christmas Carol’, alphabet games in ‘Emma’ and a game of quoits in the 1995 adaptation of ‘Pride and Prejudice’, played with gusto by Kitty and Lydia Bennet. 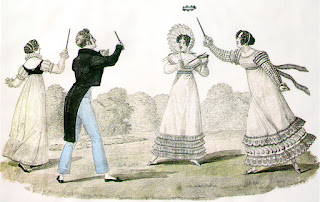 And their real-life counterparts might well have played it. They might have played sticks-and-quoits too, or ‘ringtoss’, if this 1817 engraving is any indication.

Opportunities to flirt? Perhaps. Rosy-cheeked young ladies scampering about chasing the circle and dissolving into fits of giggles – definitely! Childish? Yes, that too, but still great fun 200 years on, when some of us go to beautiful Bath to play dress-up and go back in time. 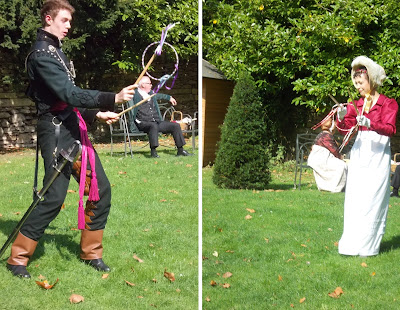 Which is one of the reasons why I have included the game in the opening chapter of my latest ‘Pride and Prejudice’ variation, ‘Miss Darcy’s Companion’. It is another ‘what if?’ story. What if Miss Elizabeth Bennet got to know Mr Darcy not as he would present himself to strangers in some remote corner of Hertfordshire, but as his nearest and dearest know him? What if their first encounter was not at the Meryton assembly, but in the garden of a fashionable London house, where several young ladies were amusing themselves with a game of sticks-and-quoits?

The peal of laughter that came to greet Darcy’s words was not his cousin’s – too light and sparkling, and the wrong pitch as well. In the same instant, both gentlemen turned to its apparent source, somewhere beyond the open windows. Glass in hand, they wandered closer to cast a glance outside.

The sight that caught their eye was at the very least surprising, for neither could remember the last time they had seen young ladies playing sticks-and-quoits on the lawn of Malvern House. One of them, Darcy noted with a surge of pleasure, was Georgiana. She had just caught the beribboned circle and flicked it with uncommon skill towards Lady Amelia, who caught it in her turn and made it fly sideways to her eldest niece. Margaret caught it too and squealed delightedly, making Darcy wonder if she had been the one whose peal of laughter had first caught their notice. But it mattered not, and he sipped his drink, a smile warming his countenance as his glance drifted back to his sister.

How many years were there since he had seen her thus? Cheerful and carefree, thrilled by a childish game, rather than burdened by their parents’ loss, by loneliness and the proverbial Darcy shyness. Georgiana was in dire need of companionship her own age, yet in all her years at school she had formed no special friendship with any of the other young girls entrusted to Mrs Rossiter’s care. Which was one of the two reasons he had suggested she remain with Lady Malvern while he visited in Kent.

The first was of course Lady Catherine. No one in his right mind would think her suited to drawing a shy child from her shell and putting her at ease. The other was Amelia, Lady Malvern’s youngest daughter. She was of Georgiana’s age and of Fitzwilliam’s open disposition, and Darcy had long thought that fostering a greater closeness between her and his sister would be to the dear child’s advantage. Yet the scene before him was even better than he had allowed himself to hope. Perhaps, to some extent, he had wronged Lady Stretton. It was plain to see that Georgiana took great pleasure in spending time with her two daughters.
Darcy smiled again as the youngest, Hetty, tottered into view, balancing the circle on the crossed tips of her well-polished sticks. She cast a quick, uncertain glance to her companion, the governess perhaps or another minder of some sort, judging by the dark, utilitarian attire.

“Just so?” the child asked and her minder promptly crouched beside her.

“Yes, Hetty,” the assurance came in kindly tones. “Keep pointing the sticks up, then spread your arms wide as fast as you can.”

The little hands shot sideways, but the quoit had already fallen into the grass at Hetty’s feet. She gave a cry of disappointment and her lip curled, but her distress was instantly forgotten as soon as her companion reached for the circle and, covering the tiny hands with hers, she guided them into sending it high up into the sky, the white and purple ribbons fluttering behind it.

“It flew, Miss Bennet!” Hetty cried excitedly. “Did you see? It flew!”

Why would Miss Bennet engage herself as a governess to Colonel Fitzwilliam’s nieces?
And where does the story go from here?

The synopsis at Amazon might give a hint or two.

And if you would like to see more snippets of places and details that have inspired my stories, do check out ‘AllRoads Lead to Pemberley’ on Facebook, and I hope you’ll like what you see. Because, no matter what obstacles are set in her path, Miss Elizabeth Bennet’s journeys should always finish at Pemberley!
Posted by Joana Starnes at 10:00 AM

I love your stories, Joanna, for I have never been disappointed in any of them! Can't wait to read this one. And thanks for the info on the games playing in Jane Austen's time.

Thanks, Brenda, you're always so kind and it means so much to me because that's exactly how I feel about your stories!! Can't wait to properly savour 'A Promise Kept'. I couldn't resist peeking and then peeking again, but like all your beautiful novels, that has to be savoured! Hugs and all the best!

That's why I love you, Joana. Not only are you a talented writer, you are always so kind.

Hoping that the Colonel doesn't fall in love with Elizabeth

Too true, Vesper! Not another 'Unthinkable Triangle', one trip down that lane was enough ;)

Ah, the first encounter with Elizabeth. Vesper/Joana, your comment about Col Fitzwilliam made me laugh...