Sneak Preview THE DUKE & THE DEBUTANTE by Melinda Hammond 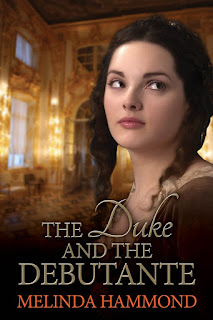 So, September is here, the summer holidays are over and we are looking forward to autumn, with those longer nights when it is lovely to curl up in a chair with a good book (although, to be honest, I can curl up with a good book any time of year!)

So I thought this month I would give you a sneak preview of a revised Georgian Romance that I am publishing on Kindle later this month. The Duke and the Debutante was one of my first historical romances but it is still one of my favourites, the story of spirited Melissa Langham, who crosses swords with the rich and powerful Duke of Aldringham.  They meet in Bath, and I have given below an extract, where they dance together for the first time.  This is the new cover, too, which I hope you like.

Upon the beat, the duke took her hand and almost from the first steps, Melissa forgot everything except the music. They skipped and gestured, pirouetted and passed each other with grace­ful ease, their steps perfectly aligned. It was exhilarating, to be so at one with a partner and Melissa wondered how it could be that strangers should move so well together. As the courante drew towards its conclusion she found herself wanting to prolong the moment. The last notes died away, they saluted one another and as she rose from her curtsy the duke reached for her hand.
'Will you stay for the minuet?'
Melissa knew she should refuse. She should go back to Lady Fryer, but for the life of her she could not summon up the will to do so. Almost without realizing it she took his proffered hand and remained on the dance floor.
The music swelled and rolled against her senses. Melissa lifted her eyes to the duke's face and could not look away. He circled around her, his intense blue gaze hold­ing her in thrall so that she was only dimly aware of the other couples dancing around them. Her body was no longer her own, it moved and swayed to the same rhythm as her partner's. When he stepped up to her, the white lace on her corsage brushed against his black velvet coat. He led her round, first one way then the other, his eyes never leav­ing her face. She was lost, time stood still, when the dance ended he held her a prisoner with the intensity of his gaze and she did not even notice that the music had ended and made no move to leave.
The musicians struck up again, another minuet, and still they danced. Melissa did not hear the murmurs of disapproval from some of the matrons sitting on the benches, nor did she notice Lady Fryer fidgeting uneasily on the edge of the dancefloor. She was caught in a world outside time, aware only of her part­ner, the sinuous elegance of his movements as they followed the steps of the minuet and the way her own body swayed and circled around him while the lilting music flowed about her. They were like two birds performing some ritual courtship, their bodies expressing a primeval language she barely understood.
The duke took her hand and led her back to their original positions, bowing as the music ended. Melissa curtsied mechani­cally to her partner. She felt dazed, shaken by what had occurred and she looked up, searching his face. There was a smile lurking in his hard eyes, a warmth that was oddly reassuring. It told her he knew exactly what had occurred during the dances and she was about to speak, to ask him to explain what had happened when another voice broke in.
'Well, well, very nice, my dear, but time is pressing. Your aunt mistook the day, there is another engagement. Come along Melissa, I am sure the duke won't ... your servant, your Grace!'
In a flurry of half-finished sentences, Sir Joseph caught Melissa's arm and almost dragged her away. The spell was broken, Melissa looked back to see the duke had not moved from the dancefloor. He was still smiling, but it was not the warm, intimate look they had shared a moment earlier. It was a smile that made a chill shiver run the length of her spine.
'Uncle, what is it?' She struggled to find her voice. 'What has happened, is my aunt ill?'
Trying to collect her scattered wits, Melissa ques­tioned her uncle, but he merely shook his head and hurried her out of the ballroom. Lady Fryer was waiting at the door and turned to follow them. Outside, the cool of the summer night quickly washed away the remains of Melissa's stupor and as Sir Joseph hurried them through the warm streets she pulled her arm free from his grasp, demanding to know what was wrong.
'I'll tell you what is wrong, miss,' declared Sir Joseph furiously, 'you have given every tattlemonger in Bath enough fodder for a month!'
'What?'
'To dance with only one man all night, and that man the Duke of Aldringham! You are ruined, child, ruined! And you, madam. What were you about to allow Melissa to meet such a man?'
'Indeed I did not know his reputation!' cried Lady Fryer, breathless with the effort of keeping up with her husband. 'Pray you sir, slow your pace, for we are attracting even more unwanted attention by this unseemly haste.'
'Thank God I decided to look in upon you before going on to supper. Heaven knows where it was leading, with the man blatantly seducing the girl in the middle of the dance floor.'
'Is that what he was doing?' she asked, remembering. It had not felt like seduction. More like heaven.
(c) Melinda Hammond

The Duke & the Debutante will be published on Kindle very shortly, so do look out for it. 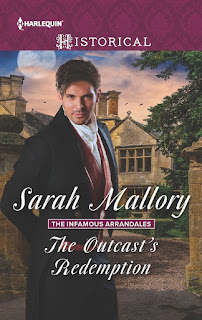 Thank you, Elizabeth! It would probably be classed as a sweet romance, so no real blush factor for the reader:-)