I have been fascinated by the terms used in the RAF during the war. I wonder how many of them you recognize and how many of them you actually understand the meaning of.
I have a wonderful little book entitled A Dictionary of RAF Slang by Eric Partridge - it was first published in 1945 by Joseph but this edition is by Pavilion Books, 1990.
Some of you might have used the term 'erk ' as in the phrase 'he's an erk' - meaning a bit of a nuisance.
It comes from  -air mechanic/ air mech/airmch/airch/erk.  I can't see how it evolved into this - but there you are. Sometimes incorrectly used as 'oik'
A plane is called a kite - it used to be, in WW1, a bus or a crate.
What about, 'He's gone for a Burton'. I always thought it was something to do with the men's outfitters. No - it's actual meaning is that someone has gone for a beer - Burton was a well known name for a pale ale. It was used to say someone had died.
We have 'to shoot down in flames' 'to shoot down from a great height' and 'to shoot a line'. All in common usage and all taken from RAF aerial warfare.
The first two mean  to defeat someone in an argument and the last to boast.
We use 'sprogs' for children today but it comes from RAF meaning a new recruit.
Here are a few  - see if you can guess what they refer to. Answers at the bottom of the page. 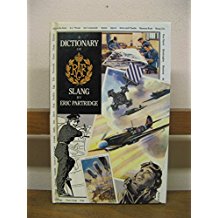 Do you remember the Monty Python sketch with two RAF pilots? Miller and Armstrong did something similar too. One comes in and says:
'Top hole! Bally Jerry pranged his kite right in the how's your father. Hairy blighter, dickie birdied, feathered back on his Sammy, took a waspie....'
Sounds genuine - but is total gibberish . No one in the RAF talked exclusively in slang any more than we do today. They used just enough to separate them from those not part of the service.

Love all the WWII slang - so very much of its time. I suppose the cheeriness and insouciance were ways of coping with the fact that flying with the RAF was very dangerous and the odds of pilots surviving were frighteningly small