You read trashy romances? What’s wrong with you?

As a romance writer, you rapidly get used to being put down rather than praised by the general public. Romance readers, knowing this tendency to be called out for their reading tastes, used to be known for hiding their romance paperback inside another “literary” novel, or wrapped in brown paper. If you talked about it, you said it was a guilty pleasure.

Thankfully, the rise of kindle changed all that. Nobody knows what you’re reading in that electronic contraption. I’m convinced the huge boost to romance since the advent of ebooks is down to that – at least to some extent. You can read whatever you like and no one is going to diss you for it.

But the idea that romance is easy to write (and therefore not worth anything) because it’s light entertainment and (often) trash, persists to this day. Yet romantic films abound, love songs roll down the years, and reality shows about love and marriage keep on coming. But pen a romance and you’re for it.

It's nothing new. Romance has been under fire ever since the 18th century when such novels (including the gothic) were trashed as systematically as they are in our time, and were thought to be injurious to the feminine mind, filling it with false expectations and foolish dreams. What's wrong with dreaming, say I. And millions of women agree.

It is getting better these days, since so many romance writers have become huge best-selling authors due to the ebook indie publisher revolution. But the stigma is still there and a romance writer develops a thick skin. When I was writing for Mills & Boon, my fellow writers and I could expect nothing but scorn and derision from the literati, especially literary journalists.  A diet of catcalls and rubbishing epithets has led the general public to regard Mills & Boon as junk food for the sexually deprived.

Interested party:  Oh, you’re a writer. Are you published?
Me, bracing for it:  Yes.
More interested:  Really?  What do you write?  Have I read any?
Me [thinks: How the heck should I know?] (politely through false smile):  I write for Mills & Boon.
Party's expression changes to blank:  Oh.  (pause while suppressing laughter)  My mother used to read those.
Me (gritting teeth):  Really?
Party (no longer interested):  Oh, yes.  I tried to read one once, but it’s not my thing really.  All that panting and deep looks stuff.
Me:  Well, I write historicals, actually.
Party (openly grinning):  You don’t!  What, those bodice ripper things.  (laughing like a hyena)

At this point, if the party is a man, he will say with a leering look:
“Do you do your own research?”  (nudge, nudge, wink, wink)

And that’s about the level of respect. Thank you. Much obliged. Is it any wonder romance writers are reticent about saying what they do, except to other writers in the genre?

Actually, that’s not entirely true.  People are usually impressed you’ve had a book published at all, and once you’ve got a longish backlist you can crush even the most hardened critic with numbers. That usually shuts them up. There is also some evidence that not all journalists consider us a legitimate target for jeering brickbats. A few articles dealing more fairly with the genre have been seen these last few years, so there is hope for us yet.

Meanwhile, I am finding my shift into Regency mystery, even though laced with heavy doses of romance, is a step on the road to respectability. Apparently, if you write detective fiction, you are allowed to be considered a "proper" writer! 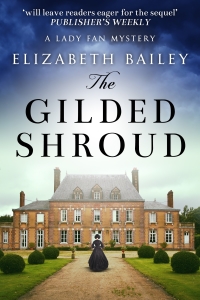 When Emily Fanshawe, Marchioness of Polbrook, is found strangled in her bedchamber, suspicion immediately falls on those residing in the grand house in Hanover Square. Emily’s husband - Randal Fanshawe, Lord Polbrook - fled in the night and is chief suspect – much to the dismay of his family.
Ottilia Draycott is brought in as the new lady’s companion to Sybilla, Dowager Marchioness and soon finds herself assisting younger son, Lord Francis Fanshawe in his investigations.Can Ottilia help clear the family name? Does the killer still reside in the house? Or could there be more to the mystery than meets the eye…?

Posted by Elizabeth Bailey at 8:39 PM

I do so agree with you about the sneering, Elizabeth. Infuriating, isn't it? I also find that people often say, on learning that I am a novelist: 'Oh! I'm afraid I don't read novels'(i.e. I am superior because I prefer non-fiction).

I've come up with an answer which usually shuts them up: 'Poor you!' - said with the greatest sympathy.

Brilliant! I've a good mind to adopt that one. Really made me laugh. Yes, it is absolutely frustrating. But it's a great idea to pity them for their inability to enjoy what gives others such pleasure.