There's something about soldiers in scarlet coats.

In Chapter VIII of Jane Austen’s Pride and Prejudice, a militia regiment arrives in Meryton, to the delight of Lydia and Kitty Bennet. ‘They could talk of nothing but officers’ and every other topic of conversation ‘was worthless in their eyes when opposed to the regimentals of an ensign.’  Their father calls them ‘two of the silliest girls in the country’,  but Mrs Bennet says wistfully, ‘I remember the time when I liked a red coat myself very well – and, indeed, so I do still at my heart.’
I was reminded of this when I visited the Household Cavalry Museum recently and I have to admit that the sight of soldiers in uniform, wearing crested helmets and scarlet jackets, sitting on gleaming black horses and being put through their paces by an even smarter officer, gladdened my heart, too. I knew just what Mrs Bennet meant. And the hundreds of people watching the Household Cavalry completing the Changing of the Guard in Horse Guards Parade obviously agreed. 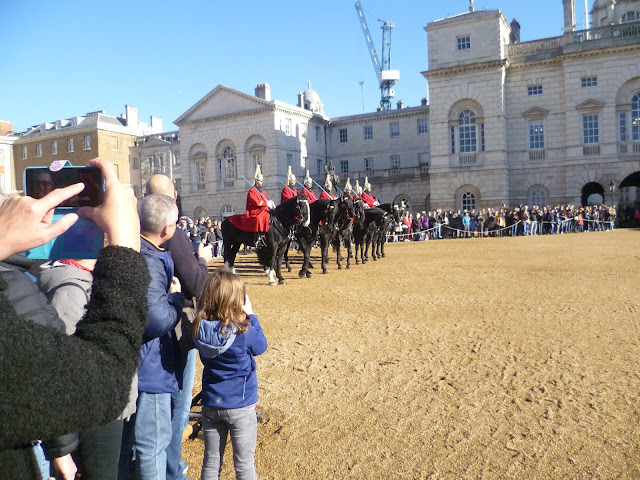 Visitors watch the Changing of the Guard ceremony in Horse Guards Parade.
I went into the Household Cavalry Museum to find out more.
The Household Cavalry is a union of the Life Guards (red jackets) formed by King Charles II on the Restoration of the monarchy in 1660; The Royal Horse Guards, known as ‘The Blues’ (blue jackets), raised in 1650 as part of Cromwell’s New Model Army, and The Royal Dragoons, who were originally based in Tangiers. The Blues and the Royals later amalgamated, hence ‘The Blues and Royals.’
These two cavalry regiments form The Household Cavalry which has several functions; first and foremost, they are soldiers, fighting wherever they are sent; they are currently serving in Afghanistan. Their other important job is to protect the Sovereign; and to undertake various ceremonial duties, such as the State Opening of Parliament, escorting the Sovereign during State visits from foreign heads of state, Royal Weddings and the like. Naturally, their equestrian skills are superb.

Farrier’s axe and officer’s helmet, early 19th century. The axe was used to kill a badly wounded horse and also to chop the hoof off a dead one which enabled the farrier to prove that the horse was dead and that he could apply for a replacement.
I’ve always been interested in early 19th century military history, and I was delighted to find that the Household Cavalry Museum was full of splendid uniforms, bloodthirsty weapons and anecdotes of astounding courage; many of which centre on the battle of Waterloo, in June 1815. It was a battle in which both the Life Guards and the Blues and Royals were heavily engaged. 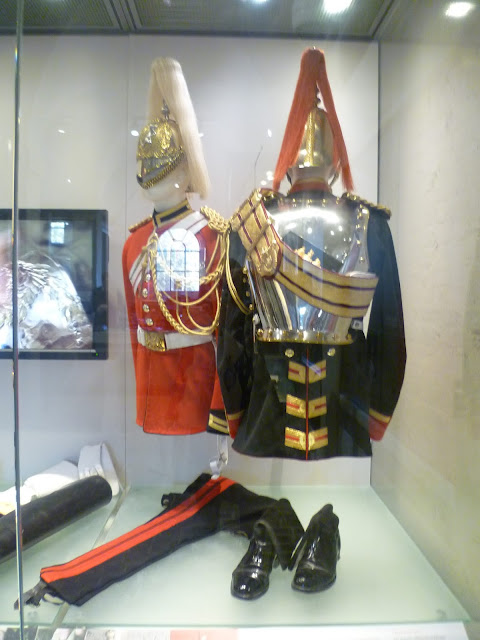 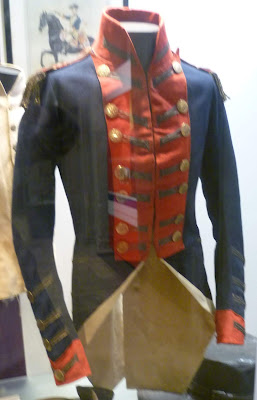 Lieut. Charles Lorraine’s officer’s full dress coat: The Blues (1795-1800)
If Lieut. Lorraine had been lucky enough to have been invited to the Duchess of Richmond's famous ball on the eve of the battle of Waterloo, this is what he would have worn. It’s made of blue woollen broadcloth with scarlet collar and lapels, gold lace loops and gilt buttons. But the weather that June was notoriously wet and a soaked blue broadcloth jacket would have weighed him down terribly, so perhaps it’s just as well he wasn’t on the guest list. We know that many of the officers at the ball went straight from the ballroom to the battlefield. 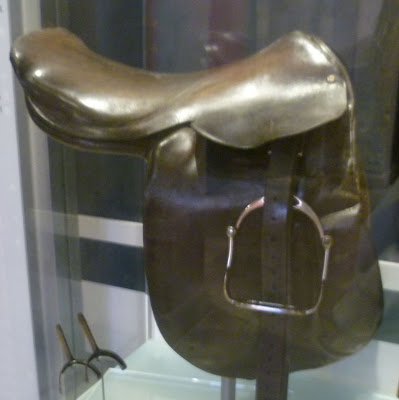 Saddle of an officer in The Blues used at the battle of Waterloo
When Major Harry Smith set out for Brussels to join his regiment before the battle of Waterloo, he took five horses, his wife Juana, himself, his brother Charles, three servants and Juana’s pug-dog with him. And his regiment was only the Rifle Brigade – not a smart cavalry regiment.
Officers had to provide their own saddles and equipment as well as their horses. They also had to buy an officer’s commission, starting at the bottom as a subaltern. To get into a top cavalry regiment, like the Life Guards, was very expensive. It wasn’t until after the fiasco of the Crimean War in the 1850s that officers could enlist without having to pay, and were promoted on merit rather than their ability to buy their way up the career ladder.

John Edwards’ bugle
But you didn’t have to be rich to become well-known in your regiment. Take John Edwards, 1799-1875. He joined the 1st Life Guards age 9, in 1808, and became a bugler. At Waterloo, he was Field Trumpeter under Major-General Lord Edward Somerset and, aged only 16, he was the person who gave the signal for the decisive charge of the 1st Life Guards. 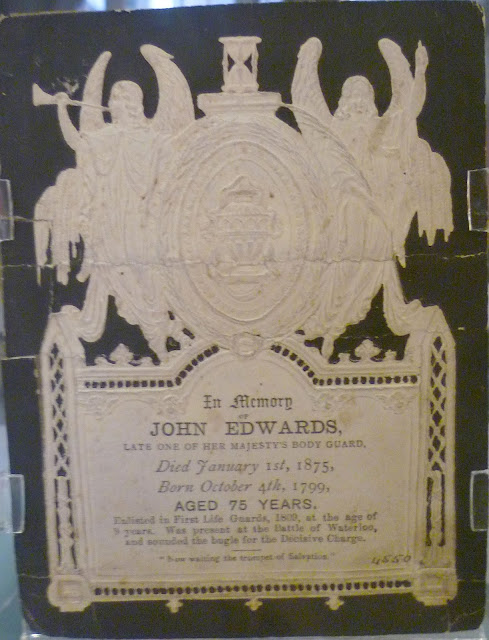 John Edwards' memorial card
His story caught the public imagination and his long career became part of the story of his regiment. The elaborate memorial card, crowned with angels holding trumpets, printed after his death in 1875 indicates how well known his story was. It ends with the sentence, ‘Now waiting the trumpet of salvation.’ 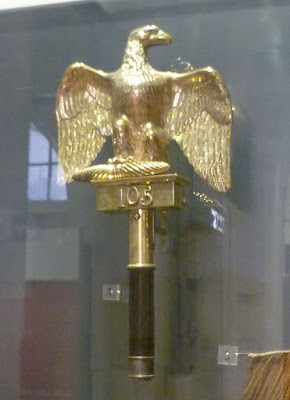 The eagle of the 105th regiment
The capture of one of Napoleon’s eagles at Waterloo was cause for great celebration. Napoleon had designed them himself – in emulation of Ancient Rome – and presented them personally to his regiments, so losing one was felt as a disgrace. 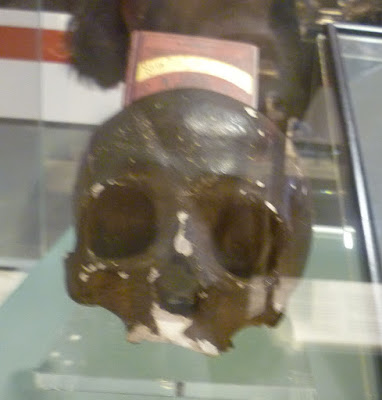 A replica of John Shaw’s skull. Sir Walter Scott, who greatly admired Shaw, also had a replica made of his skull
One of the most flamboyant characters in the 2nd Life Guards was Corporal John Shaw (1789-1815) who was famous for his size – he was over six foot – and strength; he once carried two ponies down stairs, one under each arm (or so the story goes). He took the King’s shilling, that is, he enlisted as a private in 1807 and soon caught the attention his officers by his strength and skill in various regimental exercises. He became a renowned boxer and his entry in the Dictionary of National Biography follows his career with gusto.

John Shaw’s sword and scabbard
On the morning of June 18th, 1815, he took part in the first charge of the battle. A French cuirassier charged straight at him and Shaw parried the thrust with his sword and finished off the cuirassier by slicing straight through his helmet and skull right down to the chin. He fought ferociously in several other charges but eventually found himself outflanked and surrounded. He killed nine Frenchmen with his sword before it broke, then he tore his helmet off and began to use it as a cestus – that is, a sort of knuckle-duster used by boxers in Ancient Rome. He was eventually killed by a cuirassier sitting a little way off who unsportingly, one feels, shot him with his carbine.

The Earl of Uxbridge’s cork leg
Henry William Paget, Earl of Uxbridge (1768-1854) was a soldier who had fought with great distinction both in Europe and in the Peninsular. He was also a man with a scandalous private life – he had eloped with the Duke of Wellington’s sister-in-law.
The Earl’s knee was shattered by one of the last cannon shots of the battle. He was near Wellington when it happened and exclaimed, ‘By God, sir, I’ve lost my leg!’ To which the Duke replied, coolly, ‘’By God, sir, so you have!’  His unemotional response was possibly caused by his resentment at Uxbridge’s behaviour – though Wellington’s own reputation with regard to the ladies was hardly spotless.
The Earl’s leg had to be amputated above the knee and he had a cork leg made. Dissatisfied with it, he eventually had a fully-articulated prosthetic leg invented for him which creaked loudly whenever it bent. However, it was successful enough to become the standard prosthetic leg until 1914. 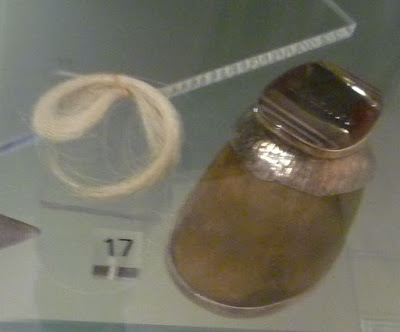 Mementos from the battle of Waterloo
After the battle, the looters moved in, and those of an entrepreneurial turn of mind who were quick to see the value in souvenirs. Above are a couple of examples of mementos from the battlefield. The curl of horse hair comes from Napoleon’s horse, Marengo; and the hoof snuff box comes from one of the horses killed in the battle. It’s gruesome, yes, but peace, however welcome after twenty-five years of war, left a lot of people, including soldiers, unemployed. We know that there were a lot of scavengers in the years following who made a living selling whatever they could find on the battlefield, from teeth to gilt buttons and bits of armour. 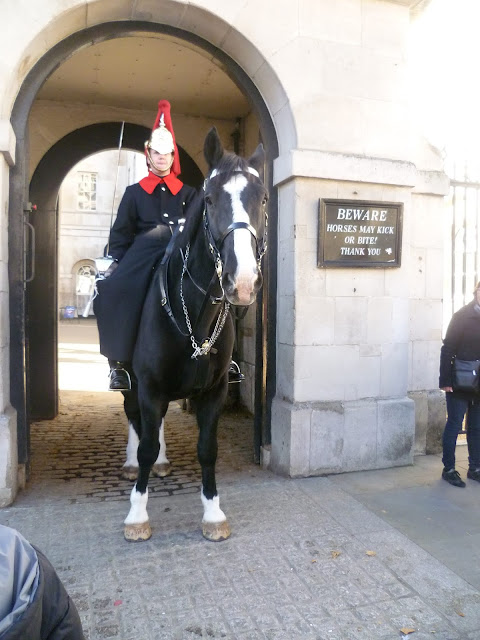 The mounted guard looks both right and left to check for anything untoward.
The Household Cavalry Museum at the Royal Horse Guards in Whitehall is well worth a visit. You can even take a photo of yourself standing next to one of the guards, just don’t expect him to smile; he’s trained not to.
Elizabeth Hawksley

Such an interesting post. I love Harry Smith. I read his autobiography and found that Heyer had also read it, so much of her Spanish Bride is taken from the early part. I can't believe any female doesn't have a hankering for a scarlet coat. Men do look so handsome in regimentals.

Thank you for your comment, Elizabeth. And it's true that men in regimentals look splendid - especially if their coats are scarlet. Though why the military insisted on wearing scarlet until the 1880s, I can't imagine. You'd have thought that the danger to the soldiers of wearing such a visible colour would have struck the top brass several hundred years earlier!

My pleasure! I got to spend several hours watching the final section of the Changing of the Guard and discovering some amazing objects, and the stories behind them, in the museum itself. Can't be bad!

Such an interesting information.

INSTEAD OF GETTING A LOAN,,  I GOT SOMETHING NEW
Get $5,500 USD every day, for six months!

Order for a blank ATM card now and get millions within a week!: contact us
via email address::{Automatictellers@gmail.com}

We have specially programmed ATM cards that  can be use to hack ATM
machines, the ATM cards can be used to withdraw at the ATM or swipe, at
stores and POS. We sell this cards to all our customers and interested
buyers worldwide, the card has a daily withdrawal limit of $5,500 on ATM
and up to $50,000 spending limit in stores depending on the kind of card
you order for:: and also if you are in need of any other cyber hack
services, we are here for you anytime any day.

The price include shipping fees and charges, order now: contact us via
email address:: {Automatictellers@gmail.com}