Jane Austen had just turned twenty three when she wrote to her sister Cassandra on Christmas Eve, 1798. Her letter opens with the news from Admiral Gambier that their brother Charles is to be sure of winning promotion as soon as an opportunity can be made for a commission on a frigate. One cannot help thinking of the comparison with Captain Wentworth!

With regard to your son now in the `London' I am glad I can give you the assurance that his promotion is likely to take place very soon, as Lord Spencer has been so good as to say he would include him in an arrangement that he proposes making in a short time relative to some promotions in that quarter.


A little further on we see her mischievous wit as she writes:
I returned from Manydown this morning, and found my mother certainly in no respect worse than when I left her. She does not like the cold weather, but that we cannot help. I spent my time very quietly and very pleasantly with Catherine. Miss Blackford is agreeable enough. I do not want people to be very agreeable, as it saves me the trouble of liking them a great deal. I found only Catherine and her when I got to Manydown on Thursday. We dined together and went together to Worting to seek the protection of Mrs. Clarke, with whom were Lady Mildmay, her eldest son, and a Mr. and Mrs. Hoare.


I cannot help wondering about Jane's relationship with her mother who seems to have often been fancying herself ill on numerous occasions. There's an undercurrent here, I think, of a certain exasperation.

Jane had been staying with her friend Catherine Bigg-Wither at Manydown Park, a substantial property in the Steventon neighbourhood. (Incidentally, it was Catherine's brother, Harris, who proposed to Jane in 1802, but that's another story.) Jane had clearly not found enough interest in Catherine's visitor, Miss Blackford who is described as 'agreeable enough', but it's the next line that shows Jane at her most caustic, and I think, funny! I do not want people to be very agreeable, as it saves me the trouble of liking them a great deal. I have this quote on a magnet on my fridge door!


She goes on to describe a Christmas ball she has attended, and here we find the youthful Jane reminiscent of Lizzy Bennet, teasing and flirting, dancing and abusing her suitors! She obviously loved dancing like the heroines in her books as she dances all twenty.

Our ball was very thin, but by no means unpleasant. There were thirty-one people, and only eleven ladies out of the number, and but five single women in the room. Of the gentlemen present you may have some idea from the list of my partners - Mr. Wood, G. Lefroy, Rice, a Mr. Butcher (belonging to the Temples, a sailor and not of the 11th Light Dragoons), Mr. Temple (not the horrid one of all), Mr. Wm. Orde (cousin to the Kingsclere man), Mr. John Harwood, and Mr. Calland, who appeared as usual with his hat in his hand, and stood every now and then behind Catherine and me to be talked to and abused for not dancing. We teased him, however, into it at last. I was very glad to see him again after so long a separation, and he was altogether rather the genius and flirt of the evening. He inquired after you.

There were twenty dances, and I danced them all, and without any fatigue. I was glad to find myself capable of dancing so much, and with so much satisfaction as I did; from my slender enjoyment of the Ashford balls (as assemblies for dancing) I had not thought myself equal to it, but in cold weather and with few couples I fancy I could just as well dance for a week together as for half an hour. My black cap was openly admired by Mrs. Lefroy, and secretly I imagine by everybody else in the room.


Cassandra was staying with her brother Edward and his family at Godmersham Park at the time and Jane was delighted to hear that she had enjoyed dancing at Ashford and had had supper with Prince William-Frederick and all the august company of the wealthy society in Kent! 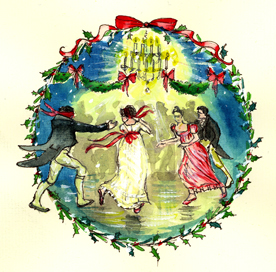 Tuesday. - I thank you for your long letter, which I will endeavour to deserve by writing the rest of this as closely as possible. I am full of joy at much of your information; that you should have been to a ball, and have danced at it, and supped with the Prince, and that you should meditate the purchase of a new muslin gown, are delightful circumstances. I am determined to buy a handsome one whenever I can, and I am so tired and ashamed of half my present stock, that I even blush at the sight of the wardrobe which contains them. But I will not be much longer libelled by the possession of my coarse spot; I shall turn it into a petticoat very soon. I wish you a merry Christmas, but no compliments of the season.


The weather was very cold and snow was expected.

I was to have dined at Keane to-day, but the weather is so cold that I am not sorry to be kept at home by the appearance of snow. We are to have company to dinner on Friday: the three Digweeds and James. We shall be a nice silent party, I suppose.


I'm always glad that Jane was able to go after all though she gives nothing of the details!
Wednesday. - The snow came to nothing yesterday, so I did go to Deane, and returned home at nine o'clock at night in the little carriage, and without being very cold.


These are just a few highlights - you can read all of the letter here.
Happy Christmas everyone! Season's Greetings and Happy Holidays to all our visitors - may the New Year bring you joy and happiness!
Jane Odiwe
Posted by Historical Romance Author at 1:41 AM

Jane, what a gorgeous post for Christmas Day, I love your paintings. Thanks for inspiring us amidst the cooking!

Lovely, Jane - so seasonal and not all that different from the way we spend Christmas.

Seasons greetings to everyone!

Thank you, Amanda and Sarah - I hope you've had a lovely day. I've had a Jane Austen action figure from Father Christmas - made my day!
Happy Christmas!

Hi, Jane Austen fans! I've been a fan of her work for many years now and as such, I joined a British Regency re-enactment society in 1998 when I was 12. We made our own regency dresses, attended events and relived the period. I wrote an article about this time in my life and I thought you might be interested:

I uploaded some of our finest photographs to accompany the piece. I don't mean to spam you but if you're offended, I understand. Re-enactment is just something I'm very passionate about so I'd like to get word out.