The Value of a Posed Portrait

I’ll admit this isn’t a subject I’ve given much thought to until lately. I was reading David Noke’s biography of Jane Austen when I came across a portrayal of Jane’s brother Edward, who was adopted into the aristocratic Knight family. Nokes describes Edward's process of integration into his adopted home as gradually became so complete that by the time Edward was twenty-one and doing the Grand Tour, he was “effortlessly affecting an aristocratic cross-legged pose, leaning nonchalantly on his walking-cane with a classical carving at his feet."

I wondered as I viewed the portrait how much a pose such as this contributed to Jane Austen's imaginary Mr Darcy. 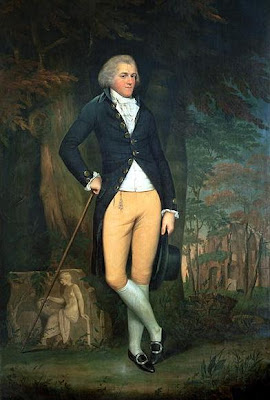 Which got me thinking about poses and the whole culture of portraiture as such – so unlike the flash photography of today, which creates instantaneous images. The whole idea of portraiture is that it gives you time to “assemble yourself,” to create your own image, so to speak, or to be “assembled” by others, as for example Emma does with Harriet Smith. Harriet Smith is the “natural” daughter of an unknown family. As part of her attempt to make her appear more eligible to marry Mr Elton, Emma draws a portrait of her as a "standing memorial": "a little improvement to the figure, to give a little more height, and considerably more elegance." Of course, it backfires, because Mr Elton is more interested in the artist than in the subject of the painting.

In my novel, The Darcy Cousins, I have a scene in which Georgiana Darcy goes to Plymouth to catch a sight of Napoleon on board the Bellerophon. Of course hundreds of people gathered around the ship and artists rushed to take advantage of the rare opportunity to paint him. Napoleaon, quite willing to play the game, would grace people with half hour appearances. I was interested to compare his pose in the well known portrait by Eastlake 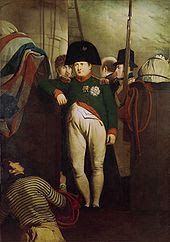 with his earlier far more collected pose, the Hand-in-Waistcoat pose for which he is famous. The pose can also be called the Imperial pose, as it is based on the hand-in-toga Classical sculpture.

Note how on board the ship he has given up the Imperial pose in favour of a much more nonchalant aristocratic type of pose. But it's also striking that in all three portraits the left arm is hanging down while the right is bent -- as if that all too casual hanging arm must be counteracted by a suggestion of activity.

Speaking of images, by the way, it is apparently an “urban myth” (?) that Napoleon was short. The myth is based on his measured height of 5 foot 2 inches. However, this measurement uses the French foot, not the standard English measurement. He was actually average height, but generally looked short compared to his Imperial Guard because they had a basic height requirement of 5 foot 10 (French) -- the equivalent of 6 foot 2 inches. In this case, choosing to be surrounded by others who were much taller than him was a mistake serious enough to have him written into history as a short man!
Posted by Historical Romance Author at 10:14 PM

What a fascinating post, Monica. I know portraits can tell us so much about how a person wanted to be seen - a big house in the background or surrounded by objets d'art - I shall now study the pose a little closer, too!

Very interesting post, Monica. I don't know that I'd agree that Edward Austen Knight's pose is 'effortless', though. He seems to be leaning rather hard on that cane - look how hunched his shoulder is.

I suspect that the pose wasn't an easy one to hold!

I suspect the relaly great men had body doubles, so they only had to pose for a short amount of time!

Thank you Sarah! Stunt men would come in handy, I suppose, if you had to lean on a cane for a long time.

I suspect you're right, Elizabeth. Nokes compares this picture with an earlier one, in which Edward looks very ill at ease with his sudden rise in the world. Now that you point it out, I can see the hunched shoulder.

If you are interested in a three day specialist Jane Austen tour of England see www.tours-international.co.uk/Jane+Austen+Tour