What’s a gentleman to do?

Doctor Johnson’s Dictionary of the English Language (1755), defines a gentleman as ‘a man of birth, though not noble’. A gentleman had no need to work for a living. 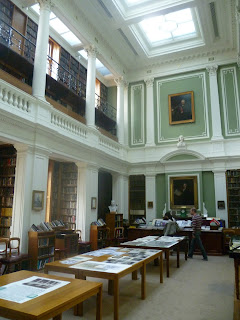 In the Regency period, there were only three professions a gentleman could go into and remain a gentleman: the army, the navy or the church. Trade was out, or, more accurately, was only acceptable if done, in your name, by someone else. Sir Thomas Bertram, in Jane Austen’s Mansfield Park, owned a slave plantation in Jamaica, but an overseer ran it for him.

This creates a difficulty for novelists of Regency romances. You cannot have a hero who sits on his backside and does nothing. Three of Jane Austen’s heroes were in holy orders: Henry Tilney, Edward Ferrars and Edmund Bertram, but it’s not easy to have a clergyman hero nowadays. That leaves only the army and the navy, which creates problems of how and where can the hero and heroine can meet. 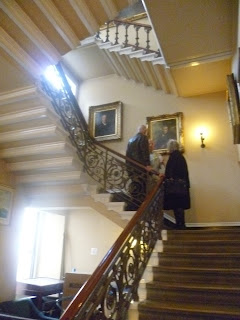 I was thinking of all this when visiting the splendid Linnaean Society, one of the ‘learned societies’ in Burlington House, Piccadilly, London. It was set up in 1788 as a major source of information on natural history, especially plant and animal classification, and named after the Swedish botanist, Carl Linnaeus.

It was, in effect, a club for men who were seriously interested in the natural sciences. Sir Joseph Banks, president of the Royal Society, was a member, as was Charles Darwin. It was, I thought, just the place for an intelligent gentleman of independent means; I could imagine him in the meeting room or library, planning his next plant collecting expedition.


Eminent 18th and 19th century men had a penchant for built splendid public buildings for various societies - with all the classical trimmings – but they were invariably off limits for women. So how could he meet her there? 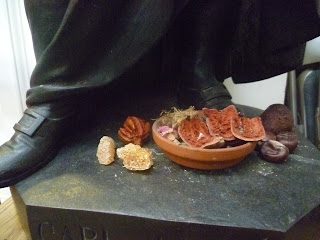 Wandering round the Linnaean Society house, I was very taken by the small statue of Linnaeus with a bowl at the base for offerings. Traditionally, if you had a seed or flower you couldn’t identify, you placed it in the bowl, and, rather like sending a letter up the chimney to Father Christmas, Linnaeus magically identified it for you.

Perhaps, one day, a resourceful young woman placed a message in the bowl, tucked away inside a seed-case…

Photos
Top: The library, Linnaean Society
Middle: The staircase
Bottom: The offerings at the feet of Linnaeus' statue
Elizabeth Hawksley

Posted by Historical Romance Author at 9:46 AM

I love these ideas! Perhaps the learned gentleman might meet the heroine in the British Museum?

A great idea, Helena. It would have to be at Montagu House, though - the British Museum itself (which replaced Montagu House) pnly started construction in 1823. But Montague House would make a splendid rendezvous. As well as antiquities, it contained various exotic stuffed animals!

What a splendid place, Elizabeth. And a lovely idea. "This seed, from a shrub in my garden..." And then a description of the garden but not the address.

Could a gentlemen stand for Parliament? And there must have been many gentlemen that ran the government who weren't in Parliament. Were solicitors and barristers gentlemen? Doctors? (I know surgeons weren't generally considered such.)

Gentlemen also ran their estates, which ties in quite nicely to your post. Some of them ran model farms to study better agricultural practices.

A lot of interesting questions, Ultragotha. In Regency times, M.Ps weren't paid - so you needed an independent income. You might say that only gentlemen could be M.Ps.

The law as a profession gradually became acceptable in Society as the 19th century went on, though, for some reason, barristers were more acceptable than solicitors.

You are right, a landed gentlemen usually did run his estate, though there were some, like Sir Walter Elliot in 'Persuasion' who let himself get into debt.

Thank you for your comment, Jan. I think the message in the seed pod has distinct possibilities myself!

Would a gentleman, say the youngest son of a peer, have been allowed to get away with doing something like, say, own a publishing house? Could he have an interest in one -- be a patron of one -- but not be involved in the day-to-day running of it?

Thank you for your intelligent questions, Lori.

It sounds incredible, but I doubt whether the son of an earl would go in for publishing in the early 19th century. Bookselling and publishing - which meant getting your hands dirty with all the printing - was seen as trade - in spite of its literary associations.

John Murray (1778-1843), who was Byron's publisher, was undoubtedly successful and at the centre of London literary life, meeting in clubs or coffee houses - but that didn't necessarily mean that he'd be invited to dine with them in their houses and be introduced to their wives or daughters.

However, his son, another John (1808 - 1892) was educated at a public school (Charterhouse) and Edinburgh University and was accepted as a gentleman. Society, and the status of publishing, had changed by the mid 19th century and was much more acceptable as a career for a gentleman.

I hope this answers your question.

this is the post that i am looking for and you are just post it, thats great."Most people think that animal shelters only house animals that were rescued from all forms of abuse; this is a grave misconception. The truth is, studies show that more than half of the dog. See more at Classifieds Pets