In Praise of Emily Eden

When I’m in need of comfort, there are various authors who can be guaranteed to take me out of myself. They include Emily Eden (1797-1869). She came from an aristocratic family at the centre of 19th century political and social life and had both a keen intelligence and a lively wit. As well as writing Up the Country, an account of her travels in India, she wrote two novels. The Semi-detached House came out 1859. It was followed in 1860 by The Semi-attached Couple, which was actually written thirty years earlier in 1829. 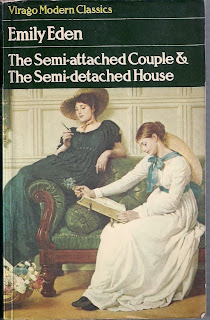 In The Semi-attached Couple, we are in Heyer April Lady territory. The beautiful 18-year-old Lady Helen Beaufort of Eskdale Castle marries the charming Lord Teviot to universal acclaim. But Helen, the much-petted youngest daughter of a loving family, can’t cope with the emotionally uptight Lord Teviot. Various misunderstandings drive a wedge between them and their relationship becomes icily formal and deeply unhappy. Can true love ever develop between this mismatched couple?


We also meet the naive Eliza Douglas, who comes from a Bennet-like household with a vulgar discontented mother. Eliza is invited to stay at Eskdale castle – and struggles to cope with intimidating footmen and overhearing that her taste in dress is vulgar. She is a good, kind-hearted girl – a sort of Catherine Morland – and we worry when she falls for the handsome Colonel Beaufort, far above her in rank, and selfishly concerned with his own pleasure. Can true love etc….

When I first read The Semi-attached Couple, it felt as if I’d discovered an unknown Jane Austen. Emily Eden obviously knows exactly how aristocratic families think and behave; it was a bit like being given a glimpse behind the scenes at Rosings Park. She writes sparkling, witty dialogue and I couldn’t wait to see what happened.

The Semi-detached House is a lively, much more satirical novel. In it, the grass-widow Lady Blanche Chester, newly-married and pregnant, is horrified to find herself sharing a house with the middle-class Hopkinsons. Mrs Hopkinson is cheerful, generous and vulgar and has two delightful daughters, Rose and Janet, both in need of husbands. Blanche has a lot to learn.

Then there’s the financial speculator, Baron Sampson, and his unhappy but spirited niece Rebecca, whose fortune he’s trying to swindle. And I particularly enjoyed the gloomy Willis, whose idea of a suitable present for his small son is a model coffin with a skeleton which jumps out when the spring is pressed. The stage is set for financial skulduggery, snobbery exposed, and true love triumphant.

Both books are guaranteed to cheer one up when feeling down or troubled; the perfect antidote to too much Christmas.

Posted by Historical Romance Author at 10:29 AM

Your post has inspired me to try and find copies of both books, Elizabeth.
Wish me luck!

My copy is a Virago double edition from 1979. I do hope you find a copy, Jane. I'm sure you won't be disappointed. Emily Eden is good at getting across people's idiosyncrasies, and 'The Semi-detached House' in particular, frequently made me laugh.

I've bought a similar copy, Elizabeth. It's on its way and I'm really looking forward to reading it.

Let me know how you get on with the books, Jane. We can have an Emily Eden email conversation! It would be lovely to have someone to discuss them with.

These sound really interesting - I'd never heard of them, so thank you for this post, Elizabeth!