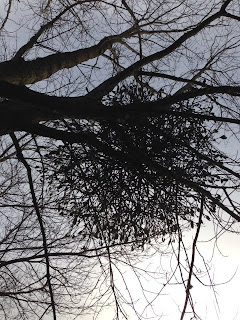 As a teenager, I used to read Asterix the Gaul comics and absolutely loved them.  That may not seem very relevant to this blog, but actually, I learned a lot about the Romans from them and even some Latin!  It was also the first time I heard about mistletoe, which was rare in Sweden, and the authors made it sound like something magical.  Indeed, in the stories the village druid, Getafix, uses it as a special ingredient for a secret magic potion and cuts it with a sacred golden sickle, which all seemed wonderful to me!

When I moved to England, mistletoe seemed to be readily available to buy in shops around Christmas-time, but I never thought about where it came from or how it grew.  I somehow assumed it was grown commercially somewhere and harvested for sale to people wanting somewhere to smooch at Christmas.  I was therefore amazed to find it in our garden when we moved to the country – not just a little bit, but huge great balls of the stuff, hung about the trees.  Without my glasses on, I’d taken it to be bird’s nests! 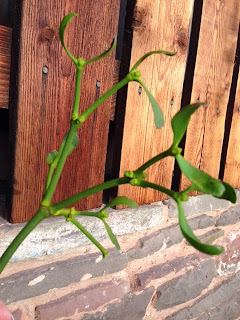 So where does the notion of kissing underneath it come from?  No one seems quite sure.

First of all, there are lots of different varieties of this plant, but the one we usually refer to is known as the European White-Berried Mistletoe, Viscum Album.  Mistletoe is mentioned in the Norse sagas, but as a murder weapon only (!), and the Celts apparently used it as a remedy for various things (it is poisonous, so they would have had to be very careful).  However, they also considered it a fertility symbol, which could explain the kissing.  (And since it is an evergreen plant, it continues to be fruitful while trees like oak and ash lose their leaves, hence it’s still ‘fertile’.)  And the shape of the mistletoe, its leaves and juicy berries, are sometimes viewed as a slightly ‘sexual’.

By the 16th century, kissing under mistletoe seems to have been a popular custom in England, so its association with fertility must have continued in people’s memories.  The tradition could also come from Scandinavia, where there are lots of obscure customs to do with Christmas and the run-up to Yuletide (or jul as we say).  It is definitely considered a ‘pagan’ plant and is often banned from being used as church decorations, perhaps because it was associated with pre-Christian mid-winter solstice rites. 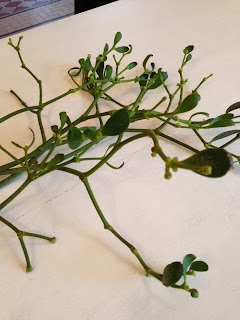 In continental Europe it is said to bring peace and luck, as well as in Greek and Roman legend.  Perhaps this was where the Asterix creators’ view of mistletoe came from?  Ancient Celtic druids are supposed to have used and revered the plant, according to tradition, but there isn’t really any evidence of this at all.  Pliny the Elder wrote about druids, saying they worshipped mistletoe because it grew on their sacred trees, especially oak.  In actual fact, mistletoe seldom grows on oak trees, so this may not be very accurate.

It also happens to be the county flower of Herefordshire, where I now live – no wonder I found so much of it in my garden!  And a town on the Herefordshire/ Worcestershire border, Tenbury Wells, have a National Mistletoe Day and a Mistletoe Festival at the beginning of December.  I’ve missed it this year, but I will definitely go next year!

Happy Christmas everyone and I hope you’ve stocked up on mistletoe!

Christina x
www.christinacourtenay.com
Posted by Historical Romance Author at 12:22 AM

A lovely Christmassy post, Christina! And, talking of mistletoe, I remember, as a child, reading the Norse legend of Balder and how the wicked Loki tricked Balder's brother into throwing a spear made out of mistletoe at him, which killed him.

The story made me cry and some officious grown-up took the book away. I was furious! Why shouldn't I cry if I wanted to?

Thank you, Elizabeth! I too read that story when I was quite young and it made me very sad, but there were other, happier, tales in the Norse sagas so I tried to concentrate on those instead :-)