Before the Rain Comes 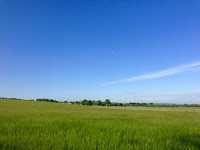 As I sit writing this with a jumper on and a rather dull day outside, it's difficult to believe that only a week or so ago we were basking in ridiculously warm temperatures by UK standards. Okay, it's the summer and so we expect (or hope) for some sunshine and warmth. Blazing heat, however, is a different matter. Clearly I am showing my age as I kept coming out with lines such as "it was never as hot as this in my day." But actually it was, of course. I vividly remember the hottest summer on record, 1976, when water was rationed and we were sent home early from school but it was too hot to play.

England has a reputation for being a cold, wet country. There are plenty of references in literature to 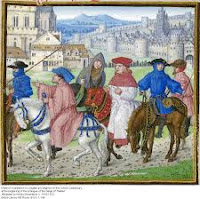 the prevalence of rain in the English weather. The Canterbury Tales opens with a line referring to April’s sweet showers – but it also refers to the “drought of March.” It is a surprising feature of the UK climate that drought is actually a recurring theme through history. Where I live on the chalk downs the springs are recorded as running dry in the drought years and the river, which is a “winter bourn” that relies on chalk streams to feed it, can sometimes dry up for several years.

As early as 682 AD there is a record of a terrible drought in Southern England and the crops dying in the fields and the population starving. In the medieval period the lack of rainfall could threaten the livelihood and then the lives of a significant part of the population. If wells and rivers ran dry and harvests failed the people died. Even the richer folk, the clergy and nobility suffered a loss of income from tithes although that is comparative when you can’t feed your family. 1730 was a drought summer and there have been at least ten major droughts since 1800.

One feature of the 19th century was that there were several instances of years when the winters were dry in a row leading to a shortage of water and a widespread failure of local water supplies. By this stage the industrialisation of society meant that supplies could be brought in by train but it also meant that there was a greater demand for water for industrial purposes in mills and works, some of which were forced to close as a result. It was not unusual for the use of water to be limited to four hours per day for months on end. 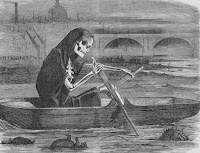 One consequence of drought was the spread of diseases such as typhoid and cholera. The “Great Stink” of London in 1858 was caused in no small part by the hot summer and the lack of rain. The Thames and many of its tributaries were overflowing with sewage and the warm weather encouraged bacteria to thrive causing both illness and terrible smells (smells so bad that there were plans for Parliament to move upriver to Hampton Court and for the law courts to relocate to Oxford.) This ghastly picture from the time, called The Silent Highwayman, illustrates all too vividly how disastrous a time it was. The situation was eased when the weather broke with heavy rain, as it always seems to do. 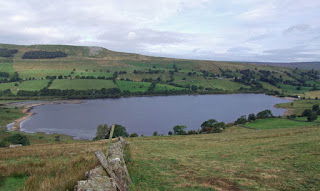 reveal the outlines of ancient building and field systems. Another is that those valleys flooded to make reservoirs such as Mardale in the Lake District and Ladybower in Derbyshire reveal the ruins of the villages lost when the area was “drowned.”

King's tower and Queen's bower,
And weed and reed in the gloom;
And a lost city in Semmerwater,
Deep asleep till Doom.
- 'The Ballad of Semmerwater' by Sir William Watson

A lake called Semer or Simmer Water near Askrigg in Wensleydale (picture above from Geograph.org) is said to cover the site of the lost village of Simmerdale (sometimes referred to as Old Bainbridge), submerged as a judgement on the wickedness of the inhabitants, according to old Yorkshire folklore. Whether there is any truth in this or not, it’s a story that I long to research and write about – perfect for a timeslip romance!
Posted by Nicola Cornick at 10:01 AM

I really enjoyed this past, Nicola. Weather generally is such an important part of British life. It's the one subject it's perfectly OK to talk to about to anybody at any time, even a complete stranger. Weather is completely neutral, it carries no racial, gender or political overtones, for example. It's just weather; we all experience it, and all our lives are affected by what it's doing.

I always feel sorry for large countries whose weather forecasts concentrate on sections of the country. In the UK, the weather forecast covers all of us and I like that. I like knowing what things are like with my cousins in Cornwall, or a friend in Edinburgh, for example.

However, perhaps others feel differently.

It's taken me years and years to get used to British weather vagaries. Growing up in the tropics in Africa, with a temperate climate all year round and a cardigan the most cover needed in so-called winter, I found it incredibly difficult to adapt. However, I pay little attention to the changes now, except to note how much more extreme they are.

So interesting to discover from this post how extremes of weather even here are nothing new.