I really enjoyed Elizabeth Bailey’s post on May 30th. I, too, have always been fascinated by first names, especially what names were in fashion when, and what they indicate about their owners’ status. I have, over the years, done several blogs about this, but, today, I’d like to share with you some of the name books I have in my collection and how useful I’ve found them. 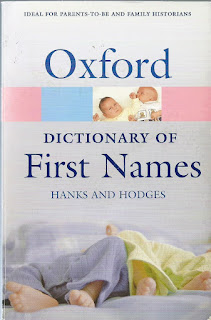 Oxford Dictionary of First Names by Hanks and Hodges

First up is the Oxford Dictionary of First Names by Patrick Hanks and Flavia Hodges. My copy dates from 2003. It covers a much wider range of names than E.G. Withycombe’s Oxford Dictionary of English Christian Names. For a start, the names included are not necessarily either English or Christian. It covers British (including Celtic) and European names; those of Canada, Australia and New Zealand; American names, Black names, and has special sections on Arab names and those from the Indian sub-continent.

For example, take the name Stephen. It gives the name’s history: ‘the first Christian martyr (Acts 6-7)’, the date, and what the name means: it comes from the Greek stephanos, which means a garland or crown. It then gives you the name in eleven foreign languages from French: Etienne or Stéphane; to Italian: Stephano; to Spanish: Esteban; and Hungarian: István. Really useful, if you want to introduce a sexy French nobleman escaping from Revolutionary Paris, or a Portuguese guerrilla harrying Napoleon’s retreating army in the Peninsular War. 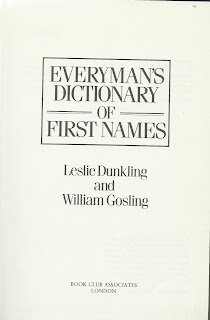 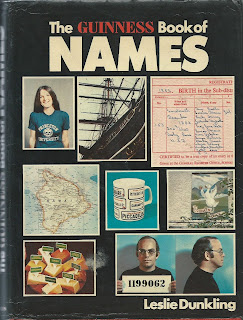 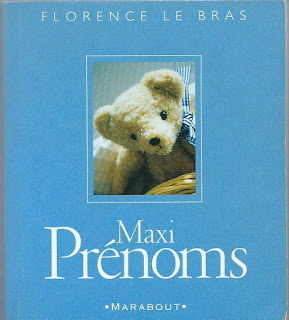 Maxi Prénoms by Florence le Bras
Lastly, a French book of names called Maxi Prénoms by Florence le Bras published by Marabout in 2000 which I bought in Canada. It’s a fun book to browse through but I have to say that its etymological accuracy can be dubious. Take Cordélia. Le Bras says it’s from ‘de Delya’, that is the Greek island of Delos, which seems fanciful, to say the least. Withycombe and Dunkling agree that it’s probably a variation of Cordula, one of the companions of St Ursula.
I take the names I use in my books very seriously - as I know you all do. I try and make sure that they are not anachronistic. All the same, I still hanker after heroes with exotic names!

Elizabeth Hawksley
Posted by Unknown at 7:43 AM

The Guinness book of names by Leslie Dunkling is the one I have and I use it all the time. But now you've gone and made me want to buy the other Oxford one! I've also got First Name Variants by Alan Bardsley, which Louise Allen recommended. Brilliant little volume, especially when you are looking for a different name from the usual.

Love your books. I've got also The Origins of our Surnames which is fab. Dictionary of First Names by Wordsworth. Give me half a chance, I'll buy another one even though I really don't need any more!

So nice to find a fellow addict!

Wonderful, Elizabeth. I have some of these books already, but more are always helpful! When I am writing a book I try to avoid having too many characters with names beginning with the same letter, I think it might confuse the reader!

Thank you, Elizabeth. I agree that it's addictive! I also have the Oxford Dictionary of English Surnames by Reaney & Wilson. But, on the whole, I tend to use place names as surnames as Georgette Heyer did after a libel action by an irate reader whose name she'd accidentally used for an somewhat unpleasant character in 'Duplicate Death'.

I agree, Melinda/Sarah! One has to be really careful that names don't start with the same letter - first names or surnames. It's all too easy to do; somehow, certain letters get hard-wired into your brain. When I was teaching Creative Writing, I used a short (1000 words) story to illustrate the problem. Its ten characters included: Julie, Jodie, Jennifer, Jack and Joan!

My grandma Daisy wore a broach just like the one you picture here. I don’t know what happened to it after she died, but I would love to try to find one in memory of her.
I’m also fascinated by names so this post was right up my street!

Thank you, Barbara. Re: name brooches. I suggest that you keep your eyes open in bric-a-brac or junk shops, or stalls in village fairs, places like that. Good luck.