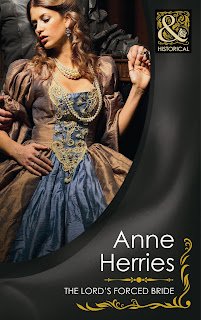 The Bartered Bride is out now in USA. Coming soon there the Hanover Square trilogy and cming here soon, paperback in august is Bought For the Harem.


I write to you from Italy, where I have spent a pleasant month with my sister Horatia and her friends. I must tell you that the climate suits my health and I have decided to settle here. There is a very pleasant villa not far from my sister's home and it is there I shall live. The estate will be sold and while I realise this may leave you without a home I am offering you the chance of living here with me and the lady I intend to marry, as soon as her family will allow it - or a house in Bath.


I am quite prepared to purchase a house in Bath for you, dear Mama. My lawyers will make certain that you have all you need - but should you wish to visit either Horatia or myself we shall be delighted to see you. I know you feel my sister has disgraced the family but I assure you that here no one regards it. She is welcomed by most of the local notables, though some visiting English do not wish to be known to her. However, her divorce is soon to be complete and then she will marry. I must tell you that she is expecting her husband-t-be's baby and very happy. We should all like to see both you and Antonia.

Hope you enjoyed this little series. I expect it will be back to excerpts next time.

Best wishes Anne Herries
Posted by Historical Romance Author at 11:09 AM No comments: 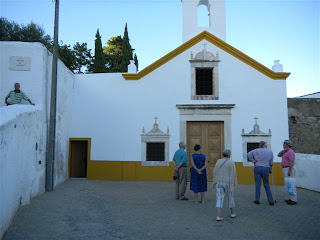 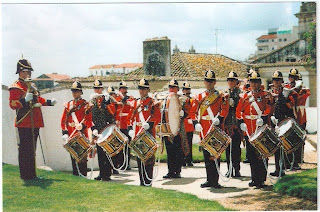 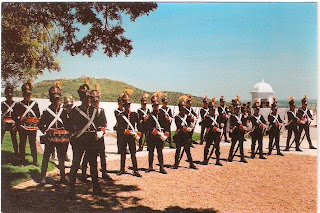 Top photograph of the chapel of S. Joao was taken by the author, the other two are courtesy of http://www.british-cemetery-elvas.org/
Posted by Historical Romance Author at 8:47 AM 7 comments:

The problem with moving house - well, two of them actually - is the realisation that you can't find anything and that everything is taking far longer to get straight than you ever imagined.

Having moved a month ago we're still chasing both things and time, so instead of the quite long and detailed post I was planning for today I am just going to share a couple of Regency prints which amused me and which focus on housing problems of some kind. 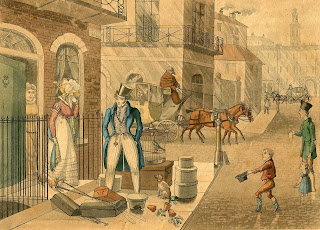 The couple on the pavement surrounded by their possessions are part of a series published by Ackermann featuring "boring" social situations. This one is all about what a bore it is when your landlady discovers that the young woman sharing your rooms is not married to you - "you have not pass'd thro the inconvenience of the matrimonial ceremony" - and evicts you without ceremony - along with lapdog, parrot and potplant. The young gentleman in his highly fashionable pantaloons and wasp-waisted coat looks as though he is about to take off and leave his weeping ladyfriend to deal with the situation!

The lodgings shown above look very respectable and the street is clean. Even the family begging seem 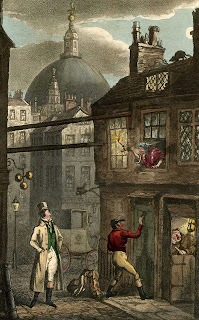 
The other print shows lodgings that are far less respectable. It is from the famous "Tom and Jerry" series and shows Jerry returning to London and calling on his old friend Bob at his lodgings. His post chaise is standing in the road behind and the postillion is knocking on the door but there is no sign of Bob, only the annoyed landlady hanging out of the window and the nightwatchman snoring down below. The ricketty house is propped up on the pawnbroker's shop opposite, a pair of cats are squaring up for a fight on the roof and the dome of St Paul's Cathedral looms over the scene.

I doubt whether this landlady would turn a hair if her gentlemen lodgers brought home a woman who who was not their wife!


Louise Allen
Posted by Historical Romance Author at 9:05 AM 2 comments: 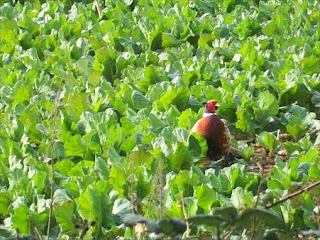 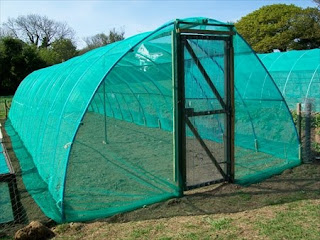 Posted by Historical Romance Author at 8:00 AM 2 comments:

Henry Tilney - what a bargain! 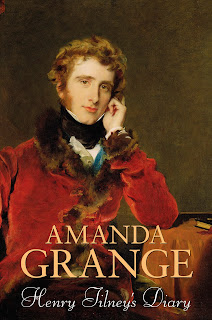 It isn't my day, but I'm just dropping in to let you know that Amazon UK are offering the hardback of Henry Tilney's Diary at the absolute bargain price of £7.83 instead of RRP £18.99

Hale hardbacks are beautiful books, with removable glossy covers, and at £7.83 the hardback is cheaper than many paperbacks. I've no idea how long this offer will last, so seize the day!!!

Amanda Grange
Posted by Historical Romance Author at 10:12 AM No comments: 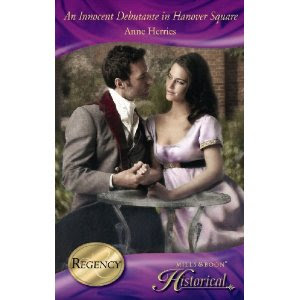 No one seems to be blogging so I thought I would put another post on. Just received a huge parcel of copies of the USA A Country Miss in in Hanover Square. HH are bringing the trilogy out one after the other in consecutive months. I was thrilled with the cover which unfortunately I can't scan to show you. However, because it is going mainstream as well as direct they sent me loads of copies and that means anyone who would like one should email me at
linda@lindasole.co.uk
and I'll send a free copy anywhere in the world free of charge to your snailmail.
Just got back from holiday in Spain, which was lovely but it is nice to be home. Haven't started work yet but I have lots of ideas for future books. In the Uk M&B are bringing out Bought For The Harem in August. Captive of the Harem is now on sale in China as a comic book and I bought a copy for my kindle from uk site. The pictures are wonderful. You can see what is happening without understanding the balloons. It is a lot of fun and I feel delighted it has been done that way in Chinese. It was done a while ago in Japense. COTH has sold in so many countries. I wonder if Bought For The Harem will do as well?
:ove to you all, Linda/Anne
Posted by Historical Romance Author at 4:24 PM No comments: