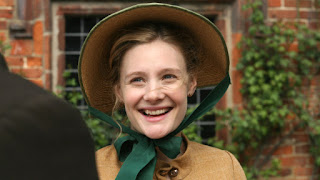 I am hugely enjoying the new BBC adaptation of Emma. I wasn't sure if I was going to like it after episode 1, because there are always niggles with any production, but episode 2 won me over completely. I love the way Sandy Welch has interpreted the characters. Emma and Mr Knightley spar like Katharine Hepburn and Cary Grant, giving a screwball comedy edge to the production at times which is fresh and funny. I wrote my own interpretation with Mr Knightley's Diary but I'm really loving someone else's take on things. I wish Emma wouldn't slouch so much, but slouching aside, I find her very likeable. What's more, she's very different to the other Emmas, and that's hard to do after so many. It's difficult to find a new way to approach the characters that still rings true.

Mr Elton is here very like Mr Collins, perhaps too much like Mr Collins at times, but I love the way he sits far too close to Emma in the carriage on the way to the party from which poor Harriet is excluded.

I liked Frank Churchill the moment I saw him, in fact he's shaping up to be my favourite Frank Churchill. Something about his face, his figure, his whole demeanour, is like a twinkle in the eye. Frank is out for fun, and thinking about the consequences will take second place to having a laugh, which is just the way Frank should be.

But it's Emma and Mr Knightley who steal the show. They spar and squabble, they make up and fall out, they play with the children, in short they seem made for each other, which is not something I've seen before. The only people who don't realise they are made for each other, at the moment, are themselves.

All in all, there is a real feel good quality to the production. The settings are lovely, the snowy scenes are pretty, the whole thing often looks good enough to eat.
Now if only Emma would stop slouching, my happiness would be complete :)

I agree, Amanda. I had my reservations in the first episode, but it's gaining momentum now. I also had a week in which to absorb this new take on the novel, which helped, I think.

I do agree, Amanda. Emma is not my favourite JA book but I am thoroughly enjoying this adaptation - I think the whole thing has been produced with a definite "twinkle in the eye".