I am now at the point in my current manuscript where me hero and heroine have been marooned alone together, trapped in a cellar as a result of the Great London Beer Flood. When I first read about the 1814 beer flood I thought it was a joke. I'd seen a snippet about it in a newspaper but I had never come across it in any reference books or other fictional books set at the time. Once I started to investigate, though, I discovered that it had been a real event and of course I felt it was too good an idea not to put in a book!

The London Beer Flood occurred on Monday 17th October 1814. Meux's Brewery Co Ltd, established in 1764, was a London brewery owned by Sir Henry Meux. Meux, like many modern brewers, bought out smaller breweries - one such being the Horse Shoe Brewery (founded by a Mr Blackburn, and famous for its 'black beer'), located on the junction of Tottenham Court Road and Oxford Street. On the roof of the Horse Shoe stood several large vats of beer. The largest was the vat of porter - a 22-foot-high monstrosity that held 511,920 litres of beer, in turn held together by a total of 29 large iron hoops. For some idea of its vast size, The Times report of 1 April, 1785 read:
"There is a cask now building at Messrs. Meux & Co.'s brewery...the size of which exceeds all credibility, being designed to hold 20,000 barrels of porter; the whole expense attending the same will be upwards of £10,000."
By October 1814 one particular batch of beer had been fermenting for months and the metal and wood of the huge vat was beginning to show the strain of holding back the thousands of litres. Suddenly, at about 6.00pm, one of the heavy metal hoops snapped and the contents of the porter vat exploded, causing a chain reaction with the surrounding vats. The resulting noise was apparently heard as far away as five miles.
A total of 1,224,000 litres of beer under pressure smashed through the twenty-five foot high 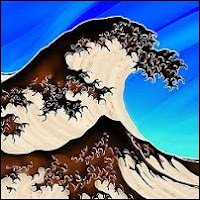 brick wall of the building, and gushed out into the surrounding area - the slum of St Giles. Many people lived in crowded conditions there and some were caught completely unaware by a tsunami of beer. The torrent flooded through houses, demolishing two in its wake. At the Tavistock Arms pub in Great Russell Street the 14-year-old barmaid Eleanor Cooper was buried under the rubble. The Times reported on 19 October of the flood:
"The bursting of the brew-house walls, and the fall of heavy timber, materially contributed to aggravate the mischief, by forcing the roofs and walls of the adjoining houses."
Fearful that all the beer should go to waste, hundreds of people ran outside carrying pots, pans, and kettles to scoop it up. Some apparently simply knelt down to lap at the liquid washing through the streets. Meanwhile back at the brewery, one man managed to save his brother from going under the vast wave, but as the tide receded the true damage was revealed. The beer flood left nine people dead. Some had drowned (like Mary Mulvey and her 3-year-old son Thomas), others were swept away in the flood and died of the injuries they sustained (two young children: Hannah Banfield, 4, and Sarah Bates, 3), and the final victim succumbed some days later to alcohol poisoning. He had heroically attempted to stem the tide by drinking as much beer as he humanly could.
Some relatives of the drowned took to exhibiting their families' corpses in their homes and charging a fee for viewing. In one house too many people crowded in and the floor gave out, plunging them all into a cellar that was still half full of beer. This morbid exhibition moved locations, attracting more custom, and eventually the police closed it down. The stench of the beer apparently lasted for months and after the initial excitement many found both their homes and livelihoods swept away with the flood. The Meux Brewery Company was taken to court over the accident, but the judge ruled that although devastating, the flood was an 'Act of God' and the deaths were simply by 'casualty'.
An extraordinary true story, and one I simply could not resist!
Posted by Nicola Cornick at 11:05 AM

Great story! I've just read it out loud to the DH and he has sighed "if only..." Although at the time I would imagine it was horrible. Also the thought of "lapping up the bear" when the streets were filled with sewage and all the detritus of life what would have been in the slums at the time makes me go yuk! (Don't know if it's true or not, but I was once told that "Houndsditch" in East London was so named as that was where dead dogs were thrown/dumped. Double yuk!) Caroline x

What a terrific story, Nicola! Love the chap who tried to stop the flood by drinking it.

I can see exactly that you HAD to include the incident once you had found it.

Quite a story, Nicola! I heard about it vaguely, but it's wonderful to have it all laid out that way. How sad that it claimed people's lives.

It's extraordinary, isn't it. The force of the explosion must have been enormous to demolish buildings and drown people. I think the smell would have been overpowering too. And yes, Caroline, the idea of drinking the beer when it had been mixed with all that other stuff! Revolting!

I did enjoy this story and of course you had to use it. I feel sorry for all the wretches either killed or made homeless, though. You'd have thought that Meux would have been found guilty of criminal negligence - but perhaps he slipped the judge a sweetener.

Yes, I wondered about that, Elizabeth, because it wasn't really an act of God, was it (though some might see filling the streets with beer as such!) but definitely a case of negligence!

Fascinating stuff! There was also a story about The Great Molasses (treacle) Flood in 1919, in Boston, Massachusetts. http://en.wikipedia.org/wiki/Boston_Molasses_Disaster

I should think a molasses flood would be even more unpleasant, Michelle!

What a fantastic story - I wish I'd read it - I would love to have put it in one of my books. Made me laugh -but not so amusing for the peopele involved, of course.
Fenella

It does have comic overtones, doesn't it, I suppose because of the thought of a load of people trying to scoop the beer up and drink it before it ran away! But I guess you can drown in beer as easily as anything else if there's enough of it. A sobering thought, if you'll all pardon the pun!

I seem to remember that some of the spectators who paid to view the corpses also died in the colapse of the building. I read this story in some old newspaper in the British Library. Then lost track of the precise year it took place, or the newspaper. The period article seemed somewhat entertained by the whole incident.

It was covered in detail in The Times, Constantine, and possibly in some of the other papers. Interesting that the building in which the corpse display was housed also collapsed! How ghastly. But I imagine a lot of the properties were damaged by the flood and wouldn't have been very well built in the first place.