A Tribute To Penny Jordan 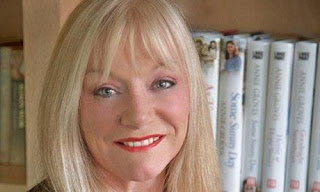 Many of you will know by now that bestselling and best-loved novelist Penny Jordan died on , having been ill with cancer for some time. There have been obituaries in  The Telegraph and The Guardian, as well as on the Mills and Boon website. They have documented the fact that Penny wrote almost two hundred books, selling around 80 million copies worldwide. But I wanted to write a more personal account of Penny here on the Historical Romance blog, and about her love of Regency romance. 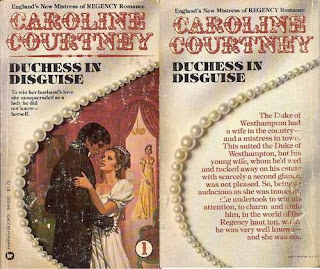 Although Penny was best known for her contemporary romances, she started her career by writing Regency romances under the name of Caroline Courtney. The first, Duchess in Disguise, was published in 1979 and led to a list of other titles. Penny and I bonded over our love of Regencies when we first met about ten years ago.
At the time, I was thinking of starting a local chapter of the RNA, and I posted on the RNA email loop to see if anyone else thought it was a good idea. I received an email from Penny, saying she lived nearby and that she would be very interested. It was typical of Penny that she didn’t say she was a phenomenal bestseller, or that her pen name was Penny Jordan, she simply signed herself “Penny”. 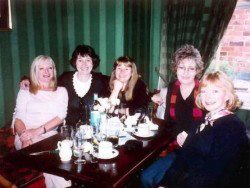 The inaugural meeting went ahead, at which time there were only four of us: (l-r) Penny, Amanda Ashby – who was at the time unpublished, but who went on to write very successful (and very funny) young adult novels – Amanda Grange (me!) and Susan Stephens (right). The fifth person in the photo (second from the right) is a friend of Susan's. We met for lunch in a local wine bar and we hit it off straight away.
Penny and I quickly discovered we shared a love of Georgette Heyer. We immediately started talking about our favourite books – Penny’s was The Grand Sophy whilst mine was Cotillion – and we laughed at all our favourite minor characters and situations, whilst sharing our favourite heroes and heroines. That was when Penny told me that she had started her career by writing Regencies, which she still loved.
She was a very warm, funny person, with a love of  books of all kinds. She loved encouraging others and she set up a writers’ group to help aspiring novelists make it into print. She was a very knowledgeable person and she was always willing to share her experience with others. Many of her protégées became successful writers themselves, including Susan Stephens.
But that was only part of Penny. Although she loved books, she had many other interests, too. We often met up to chat about books and writing, but also the other things in life. When I went round to her house I commented on her fabulous decorations and she revealed that she had designed all the rooms herself. Not only that, but she had painted them herself, too. She said that she loved painting because it satisfied her creative impulse whilst also being relaxing.
Now I like decorating, and I’ve decorated a lot of rooms in my time, but Penny’s results were professional. She said that, if she hadn’t been a writer she would have been an interior designer, and it was easy to see that she would have been very successful. Everything in her home was immaculate. All the lamps, cushions and ornaments were chosen with an artist’s eye. Despite this, her home was not a show home. She was a great dog lover and her Alsatian, , was her beloved companion.
Although she had a lot of difficulties in her personal life, with her husband dying of cancer and her own health problems, Penny remained a cheerful and optimistic person, writing until the end of her life. She will be remembered by her readers for her wonderful Regencies and historical sagas, as well as her contemporary romances and blockbuster novels, but she will be remembered by those of us who were lucky enough to know her as a warm, kind, generous, fun-loving person who filled her own life, and the lives of those around her with happiness. She will never be forgotten and she is sadly missed.

What a lovely, warm tribute Amanda and so true. Thank you.
Penny was a star who wore her stardom lightly, but how she shone.
I remember her coming to a book launch of mine at Whittington Castle (coincided with the castle's open day/village fete) and when I tried to introduce her to people she was having none of it. 'No, no, this is your day,' etc. She was just content to be anonymous. She also knelt down in her white shirt to give our shaggy black mongrel the biggest of hugs. I have a photo of us together from that day and It's a favourite in my collection. I will always remember Penny with deep affection.

This is a wonderful tribute, Amanda. Penny was indeed an exceptional novelist who wore her talent very, very lightly.

She was unassuming, forthright when it mattered, a perfectionist, but very human.

She was gorgeous, generous and I miss her.

Elizabeth and Jan have summed it up so perfectly and have said all that I could and want to say about Penny.

Much loved and always missed.

Thank you for writing this warm and lovely tribute to a lovely friend.

She was kind to this newbie, and gave me a lot of brilliant advice. She was also knockout elegant.
Her funeral last week was, I think, what she would have liked.

Amanda - that is such a beautiful tribute to Penny and it's exactly how I remember her as well. I've always felt that we were so lucky to get to know Penny the way we did (over pudding!!!). She has honestly inspired me not just to be a better writer but to be a better person.

Also, whenever I see authors behaving badly I ask myself if Penny would do that, of course the answer is always no and I figure if someone who has been as successful as she has doesn't behave badly, then no one else should either!

Thank you for the tribute, Amanda. I did not know Penny well but she was always lovely when we met. And oh how I loved her Regency romances!

I read all the Caroline Courtney books -still have some -I never met Penny in person but we e-mailed sometimes and she was charming and encouraging. What an amazing legacy she's left her family and the world.

Thank you for sharing that tribute, Amanda.
I'd only read Penny's contemporary romances, but so many of them are in my keepers box.
I was sorry to hear the sad news, but her books are still here to continue to inspire and that's a lasting memorial.

A lovely tribute, Amanda. Penny was such a warm and friendly person. I met her well after her Caroline Courtney days, but I well remember, when I was starting out, that someone compared me to CC - I was so flattered!

He was a hard-working, professional writer, but she always had time to help others starting out in the profession.

Oops - apologies for changing Penny's gender, it should of course read She was a hard-working professional!