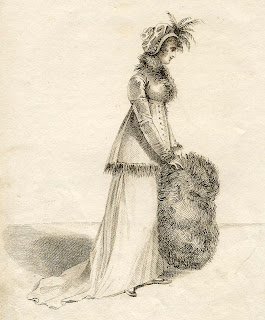 Late Georgian and Regency fashion plates are a passion of mine and I have a large collection. The most familiar, and usually easiest to obtain, are those published in Ackermann’s Repository and in La Belle Assemblée. The Lady’s (also Ladies’) Monthly Museum, Fashions of London and Paris and The Lady’s Magazine. These are all English. The Journal des Dames et des Modes is the source of most of the French fashion plates that collectors find today.
These are all from journals that were A5 size or lightly larger. What is a thrill (and an expensive one at that) is to come across the gorgeous Quarto sized plates from Le Miroir de la Mode.
Despite its French title this was an English production, the work of the mysterious Madame Lanchester, or, more prosaically, Mrs Ann Lanchester. Madame Lanchester, a fashionable modiste and designer, produced designs for Ackermann, Fashions of London and Paris and La Belle Assemblée. She had a shop in New Bond Street c 1803-4 and St James’s Street in 1806-9.
For less than two years, between 1803-4, she published Le Miroir de la Mode to promote her own work. The first print is shown at the top in the cheaper uncoloured version. It was also produced with a vibrant red pelisse. Below is a detail of another plate showing the detail fo the drawing. 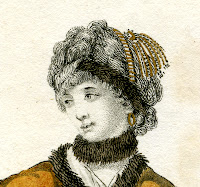 It was an incredibly lavish production and only the wealthiest ladies could have afforded it. There were two plates in each issue and the text was given in English, French and Italian. The plates were hand coloured and each had a tissue overlay.
Where Madame Lanchester got the money from for this extravagant publication is a mystery, because in January 1803, when she was in Sackville Street, and described as ‘dealer and chapwoman’, she was declared bankrupt. In the previous year this advertisement had appeared in the Morning Chronicle (24th April 1802).


SALES BY AUCTION
part of the SUPERB and VALUABLE STOCK of MADAME LANCHESTER of Sackville-street.
Messrs. ROBINS beg most respectfully to acquaint the Nobility,
Gentry, and the Public, that they SHALL SUBMIT BY
AUCTION, on the Premises, in Sackville-street, on Wednesday
And two following days, at 12 o’clock.
THE truly elegant and unparalleled ASSEMBLAGE
of the various elegancies of DRESS, ornamented with
superb LACES, the property of MADAME LANCHESTER, going
in a few months to Paris, consisting of White and Black Lace,
Veils and Cloaks of the most delicate patterns, rich laced Caps
And Sleeves, Spencers, Morning Calsons, Handkerchiefs and
Equivoes, Pelices, Morning and Evening Dresses, beautiful
White and Black Laces, ornamental Gold Watches and Trinkets,
a few Boxes of Rouge etc. The whole of the Dresses
Made up in that style of fashion for which Madame Lanchester
Has become so eminently distinguished. – May be publically viewed
On Monday and Tuesday prior to the Sale (by Catalogues only).
Which may be had at 2s each, on the Premises, and of Messers.
Robins, Covent-garden.
It gives a good idea of the stock held by a fashionable modiste, but presumably the explanation that she was going to Paris was merely a front to cover the financial problems that caused the bankruptcy less than a year later. 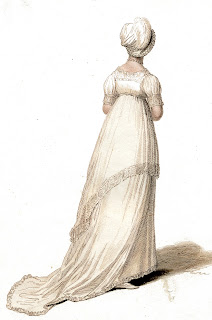 However, she must have recouped her fortunes somehow, established herself in New Bond Street and published her short-lived magazine. Between 1806-9 insurance company records place her at 59, St James’s Street but in 1810 she was again declared bankrupt. After that, nothing is known of Ann Lanchester and all we are left with are the exquisite plates to provide serious temptation for collectors on the rare occasions they come on the market. 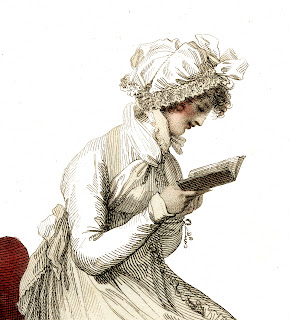 Lovely pictures and fascinating story. Hadn't heard about her before. Thanks.

Those are beautiful illustrations, Louise. Thanks.

Funnily enough I was doing some extra research on women's magazines in the Regency the other day, but later.

What a shame that she disappeared into obscurity! She was obviously very talented, but perhaps not good with managing money? Interesting post, Louise!

Fascinating post, Louise. I agree with Christina - she was obviously a very talented lady.

Oh my, that is a STORY! The rise and rise of Mme Lanchaster...

I was doing some extra research on women's magazines in the Regency.
Sell Rolex watch

Hi, I have little interest in fashion but I can tell you what happened to Margaret Lanchester. She married Arthur William Devis (Portrait Painter) on the 4th Sep 1806. Her extravagance also drove him into bankrupcy for which he was eventually imprisoned. Miss Lanchester ran her business alongside Arthur's sister Ann Devis. I assume this was the reason for his largesse. Arthur was eventually released from prison and went on to paint his most famous work "The Death of Nelson".

Could the illustrations be the work of Arthur William devis?

Further to my previous post regarding the mysterious Madam Lanchester, I have now found further information which details her later years and death. She was jailed for bankruptcy in Marshalsea Prison on the 8th Feb 1812. She was discharged on the 1st Jan 1813 on the surety of Arthur William Devis. She died Nov 1818 at her home in Caroline St, Bedford Square and was buried at St Giles in the Fields Churchyard on the 2nd Dec 1818. The illustrations are almost certainly the work of A.W. Devis who died at the same address some four years later.

Need To Increase Your ClickBank Traffic And Commissions?

I found this snippet in a newspaper and wanted to post it in a place where someone searching for Madame Lanchester might find it. This comes from The Times, published Thursday 12th April 1810. (front page)

"MADAME LANCHESTER begs most respectfully to acknowledge the high sense of gratitude she feels for the distinguished honour and liberal patronage she has long experienced from the Nobility and Gentry, whose polite and marked attention to her Fashionable Establishment, in St. James's-street, will forever be impressed on her mind, with the liveliest feelings of sensibility after recently defeating (with the kind assistance of her friends)a most illiberal and unwarrantable attempt to harrass and destroy her unwearied endeavours to provide for her family; she is happy in the opportunity of informing her friends and patrons that she has been enabled to resume her business with more advantages than heretofore, and to adopt such arrangements as will convince the Nobility, Gentry and public at large, that her future exertions shall be invariably devoted to merit a continuance of their patronage and kind indulgence. The ready-made articles in Millinery, Dresses, Pelisses &c. &c. will be sold at reduced prices. Country Milliners will be treated with the same liberal terms as hitherto."

A bittersweet advertisement, given the information posted by Anonymous above about the years following this effort to restart her business. :(

Thank you Heather for your post. I have added the news article to my Ancestry.com tree. Here's a link if anyone wants to have a look:
https://www.ancestry.co.uk/family-tree/person/tree/87356141/person/32558906796/facts