If you go to Derbyshire...

If you go to Derbyshire and have time to spare, there is so much to see!
There are the well-known treasures of course – Chatsworth in all its glory, the wonders of the Peak, Dovedale and its romantic associations. But there are also little hidden corners I never knew much about until June this year, when I came across this delightful book, ‘Romantic Haunts of Derbyshire’  by Jill Armitage (still available at Amazon apparently). 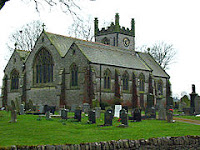 This is where I first heard of the ‘Gretna of the Peak’, a little chapel in the Derbyshire White Peak, that came to be beyond the jurisdiction of English bishops and thus became a beacon to couples eager to be married without waiting for the banns to be read (you can read more about it here). Sadly, the original chapel is no longer there. It was demolished in 1876 and replaced with the present church.

The book is full of stories of thwarted love, wedding customs, jousting for a lady’s hand, crimes of passion and elopements. Some of the latter are quite famous, such as that of Dorothy Vernon of Haddon Hall and John Manners, the younger son of the Earl of Rutland. While a fairly good match in terms of wealth and status, the young lovers were kept apart by religious conflict. John Manners, from a Protestant family richly rewarded with monastic land for their part in the dissolution of abbeys and monasteries, was considered wholly unsuitable for the daughter of a staunch Catholic. Yet they eloped (Dorothy allegedly escaped through the back entrance and down the steps still named after her), got married and in true fairytale style, lived happily ever after.

Others were not so lucky. In a reversal of the traditional plot of Regency romances with couples eloping to Gretna Green, there is the story of Alan and Clara who, in April 1758, decided to elope from their native Scotland to the ‘Gretna of the Peak’ because her well-off father would not countenance Clara marrying a penniless labourer. They undertook the perilous journey, only to come to a grisly end in Winnats Pass, a limestone gorge outside of Castleton. Clara’s attire was sufficient proof of her wealth to attract notice at the last inn where they stopped to ask for directions, and they were set upon and murdered as they tried to make their way through the gorge. 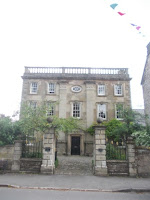 There are places known as the ‘Lovers Leap’ in many parts of Derbyshire. There is a famous one in Dovedale and lesser known ones in the village of Stoney Middleton and in the charming market town of Winster. Exquisitely unspoilt, Winster has not lost any of its Georgian beauty. One of its most attractive buildings is Winster Hall, a period property of understated elegance, halfway down the main street. We can still admire its fine lines and graceful features, but few know of the tragic lovers’ leap connected to it. Apparently one of the daughters of the house had formed a very unsuitable attachment to none other than the family coachman. The parents would not condone it, needless to say, and she was compelled to engage herself to a man more suited to her position. But it is said that on the night before her wedding the star-crossed lovers climbed to the top of the house and jumped over the balustrade together. And life often surpasses fiction.

But enough of grim stories of unhappy lovers. The ‘Romantic Haunts of Derbyshire’ tells of fortunate lovers’ leaps too, such as the tale of another couple heading to the ‘Gretna of the Peak’ in defiance of their parents who would not let them marry. Just as their angry pursuers were gaining on them, after a dramatic chase where the lady’s horse lost a shoe, she and her groom-to-be rode hell for leather together on his mount and, as they reached the spot where a wide gap stretched before them, they leapt and landed safely on the other side, while the pursuers did not have the nerve to follow. Again, stranger than fiction. If we read that in a novel or saw that in a film, we might think it was far-fetched.

I’m looking forward to going to Derbyshire again (to be honest, any excuse would do!). If you visit, I hope you’ll make many romantic discoveries of your own. I hope you enjoyed the post (despite the couple of grim tales in the middle). I certainly enjoyed researching for it and writing it.

It will be my last post at Historical and Regency Romance UK for a while, I have reached a point where unfortunately I’ll have to take a break from contributing, but I am extremely grateful for the warm welcome from the wonderful people here (much, much appreciated!) and also extremely grateful to all of you who have stopped by to read my posts. Many thanks, everyone, and I hope we’ll meet again online or who knows in what weird and wonderful places. All the best and wishing you happy trails!
Posted by Joana Starnes at 9:00 AM

Lovely post, as always, Joana. I shall miss them.

Thanks SO MUCH, Elizabeth! Hugely appreciated, as always :)

I shall miss your posts, Joana, but hope to see you soon!