Where the Mistress Lived

This post is inspired by Elizabeth Bailey’s fascinating overall view of the Oldest Profession in Georgian Times. I thought it would be interesting, by way of contrast, to fast forward about a hundred years and zoom in for a close look at a ‘women of easy virtue’ scene in the 1850s. Fortunately, there is exactly the right picture to illuminate this: the pre-Raphaelite William Holman Hunt’s The Awakening Conscience, exhibited at the Royal Academy in 1854. 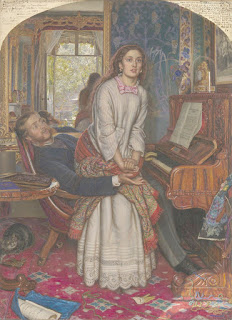 
The picture shows an actual room in a ‘maison de convenance’ – the traditional place for Victorian gentlemen to house a mistress. So, if you’ve ever wanted to see exactly what such a room looked like, this is the real thing: Woodbine Villa, 7 Alpha Place, St John’s Wood, so be specific. I looked it up in the London Topographical Society’s A to Z of Victorian London and, whilst it’s not a fashionable address, it must have been a pleasant place to live. Woodbine Villa was a detached house, within five minutes’ walk of the Royal Botanic Society’s Gardens in Regent’s Park, near Baker Street and Marylebone railway stations and the Oxford Street shops were not too far away. Perfect for a mistress with a generous allowance from her lover, and easily accessible for him.


The room shrieks ‘nouveau-riche vulgarity’ – at least it did to the original viewers, who were shocked to see a picture so in-your-face modern. The garish patterned carpet is new (though a bit of the carpet is significantly unravelling in the bottom right-hand corner). The heavily-ornamented rosewood piano is too shiny. Everything in it speaks of a room which is newly-furnished for a mistress; it is not, and never could be, a family home. There is no vase of flowers picked from the garden by the lady of the house. No child plays with his toy soldiers on the floor.


Hunt wants you to notice the symbols of a guilty relationship. The heavily-gilded clock on the piano top is under a glass dome, perhaps emphasizing the relationship of the young woman to the man; she, too, is kept under glass, as it were. She is not part of the man’s ordinary life. His parents (or, perhaps, even his wife) do not even know she exists. We note his tall top hat on the table – one might call it phallic; and a glove dropped carelessly on the floor is evidence of a fleeting visit. We can tell that he is a fashionable young man by his curly hair and full side-whiskers. 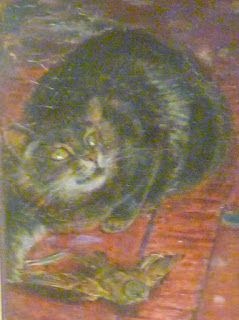 The cat playing with a bird


A cat hides under the table to the left. He (it is surely a tom) has caught a pretty bird alive and is playing with it, just as the man plays with the girl. 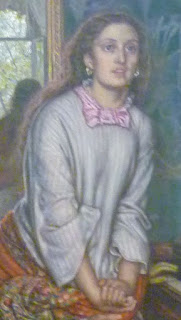 
The girl herself is wearing a night-dress with a brightly-coloured shawl wrapped round her waist. My Handbook of English Costume in the 19th Century tells me that: Shawls with centres of a brilliant colour contrasting with the borders were much worn. She is also wearing large hoop earrings, also very fashionable. The gentleman has obviously spared no expense either with her clothes, or the accommodation. Her hair is loose which indicates the familiarity of their relationship. Furthermore, just in case we have missed the point, she is not wearing a wedding ring. 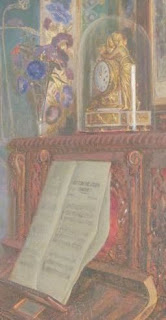 The music and the clock


What Holman Hunt’s painting shows the very moment of the girl’s spiritual awakening to her moral degradation. Her lover has been playing the piano – one hand still rests on the keyboard. He plays Thomas Moore’s Oft in the Stilly Night, a plaintive song which recalls lost opportunities and happiness in the past.


Oft in the Stilly Night,


Ere Slumber’s chain has bound me


Of other days around me…


But there is more. The bottom of the picture frame has a quote from the Bible, Proverbs 25.20: As he that taketh away a garment in cold weather, so is he that singeth songs to a heavy heart. This didn’t make much sense, so I found a modern translation. It said: Like one who dresses a wound with vinegar, so is the sweetest of singers to the heavy-hearted. This made more sense; the man thinks he’s simply playing a sentimental song but the girl herself is reacting to the poignant and painful memories the song evokes. Suddenly, we can see, she wants out. She makes to stand up, but he can very easily pull her back down onto his lap. We are left not knowing what happens.


As Elizabeth Bailey’s post made clear, it was all too common for a young girl fresh from the country, to find herself cozened by a procuress and ending up either in a brothel or as some man’s mistress. A life of disease, poverty and the dreaded workhouse awaited her.


However, one has to say that, so far, the girl in the picture has done rather well for herself. Her lover is rich and fond; he might be persuaded to secure an annuity on her. She could be sensible and avoid alcoholism (common among prostitutes) and save for a rainy day. (Unfortunately, the Post Office Savings Bank did not open until 1861 but that date is not too far away.) And, if she’s a country girl, she might well doubt her welcome back home. And what other options are open to a reformed lady of easy virtue? Does she really want to live in poverty on a pittance doing sewing, and end up in the workhouse? The price of virtue might just be too heavy.


She might even have noticed that this picture is not aimed at the man who tempted her into vice. Hunt is concerned only about female sexual virtue. Maybe she will opt for a different solution from the one Hunt is urging her to take.


If you want to see the picture and decide for yourself, The Awakening Conscience by William Holman Hunt is in Tate Britain.


Photos by Elizabeth Hawksley and the Tate Collection

Brilliant analysis, Elizabeth. How very interesting all these little details become when the moral is pointed. And thank you for your kind comments on my original post. It is a fascinating subject altogether and very much part of the journey of women's rights.

Thank you, Elizabeth, much appreciated. I agree - it is a fascinating subject. It certainly illustrates how few options women really had, and how much they were legally disadvantaged. They couldn't open a bank account, for example, or initiate a divorce. Married women weren't even entitled to keep her own earnings.