The Oldest Profession in Georgian Times 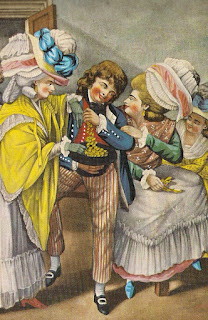 When a leading magistrate called Patrick Colquhoun wrote an analysis of crime in the metropolis in 1797, of 115,000 citizens listed as being engaged in various crimes, there were allegedly 50,000 “Unfortunate Females of all descriptions, who support themselves chiefly or wholly by prostitution.”

This is a staggering statistic, and to my mind demonstrates two things: how limited were opportunities of employment for women, and the heavy price women paid for giving way to what we now regard as a natural inclination. In other words, sex.

There’s nothing new about men paying for sex. They always have, they still do and they probably always will. What’s new - and the change has been visible in my lifetime - is that women are no longer pilloried for having indulged their sexual appetites.

For our 18th century sisters, this was certainly not the case. Prostitutes could be committed to Bridewell, a “house of correction” where they would be set to beating hemp as a job - after being stripped to the waist, tied to a whipping post and publicly flogged. However, it wasn’t a popular punishment, because everyone shouted to the president of the Court of Governors to “knock, knock” with his gavel, which signalled the end of the whipping.

It seems harsh to us, until we remember how brutal the 18th Century was. Punishments worse than this were commonplace, and I expect your average prostitute would sooner be flogged than hanged.

What is particularly mean about it is that many women only became ladies of the night after they had been seduced by an unscrupulous man, and had no choice. Without marriage, they were disgraced and their families either had to chuck them out or be tarred with the same brush.

Innocent girls were often also seduced into prostitution not by men, but by members of their own sex. Youthful virgins were highly valuable to a brothel bawd, and these women would pick up country girls coming to to find work. Ladies genuinely in search of maidservants would meet the arriving wagonload of girls, but among them were the procuresses, cajoling the prettiest with flattering promises of employment and riches. 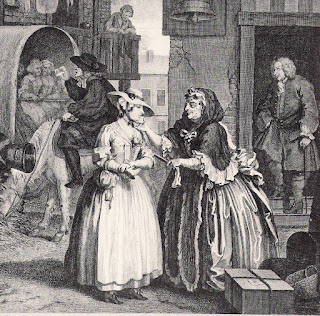 Hogarth’s series of prints “A Harlot’s Progress” were designed to point up the tragedy, taking Moll Hackabout from innocence to procurement, through a career as a successful and fashionable courtesan, until her keeper gets bored and throws her out. At this point she is reduced to common prostitution, followed inevitably by imprisonment in Bridewell, then penury, disease and death at 23. Apparently this was not an uncommon path for a young girl to tread.

There was one route out of the mire and that was marriage. Get a ring on your finger and respectability could wipe out the past. A surprising number of harlots made it into the aristocracy, and a couple of generations down the line, it no longer mattered and was likely a talking point of pride. Any girl might get away with a fall from grace, provided she didn’t get pregnant and both she and the guilty male in the case kept their mouths shut.

Contraception was so unreliable, however, that unwanted pregnancies were rife. The first task was to try and get the seducer to marry the girl. Failing that, concealment was not impossible, if relatives had the sense to get her abroad for the duration. It would be given out that she needed to go away for her health, and travel took so long that several months out of the country would cause no remark. The child would be put out for adoption into God knows what kind of life, and the girl would return with reputation intact.

Naturally, her nearest and dearest would be at pains to get her married as soon as possible, and any husband discovering he’d been sold a pig in a poke was unlikely to make a song and dance about it because of the potential scandal. Separation and divorce were so difficult to achieve that he was likely better off keeping quiet about it. And he was probably well paid too!

One other way was to give the disgraced woman a married name and settle her in an unsuspecting village somewhere as a widow. She might live poorly, but at least she would live respectably and be saved from a life of prostitution.

Posted by Elizabeth Bailey at 3:29 PM

A really interesting post, Elizabeth, with a lot of important points. I think there were probably different rules for girls with money. You could probably get away with much more if you were lucky enough to have a healthy dowry!

Yes, but there were different perils for a girl with money -- your family focused on keeping you innocent, which meant you knew very little about men and their wicked wiles! No wonder rich girls were guarded day and night, practically imprisoned by the rules of propriety. All a man had to do was get under Miss Moneybags' skirts and he'd be set for life.

On the contrary, the flogging of prostitutes was an extremely popular punishment. Attending the public gallery, either at the Bridewells or the Old Bailey to ‘see the strumpets whipped’ was a very popular and fashionable entertainment for the Georgian middle classes, both men and women. It had a particular attraction for men, as the unfortunate women being flogged were stripped naked to the waist, with the exposure which that involved.

It would have been a horrific ordeal for the women being so punished. Not only were they stripped naked to the waist, but they would have been tied with their wrists stretched high above their head to the whipping post, which in most cases would have been an upright pillar of rough sawn, splintery wood, against which their naked breasts would have been pressed and rubbed as they writhed under the lash.

Worst still, whipping with the cat’o nine tails, which was the instrument most often used, affected not only the victim’s back and shoulders, but the whole torso, as the whip’s thongs would wrap around the side, cutting into the ribs, armpit and breast region on the opposite side to which the flogger stood. This aspect has been historically recorded with the regard to the flogging of male sailors, soldiers and convicts. One can only imagine how horrific it would have been for women suffering weals and lacerations to the armpit and breast when being flogged. There would also have been the resultant scarring, which would have affected the wretched prostitutes ability to attract clients, except for those men for whom whipping scars on a woman’s back, armpits and breasts were a ‘turn on’.