In the Gallows' Shadow

What must it have been like to be in a prison where the gallows was always visible? When you might soon be climbing those wooden stairs and feel the noose being put around your neck. These thoughts jostled through my head when I visited Downpatrick Museum in Co. Down recently – it was once a gaol.


My writing self thought – but a gallows is just what a novel needs. Think of the scene in Henry Fielding’s Tom Jones (1749) where the innocent Tom is climbing the scaffold's wooden stairs. The tension is almost unbearable. Will a pardon come in time? Or will poor Tom swing? 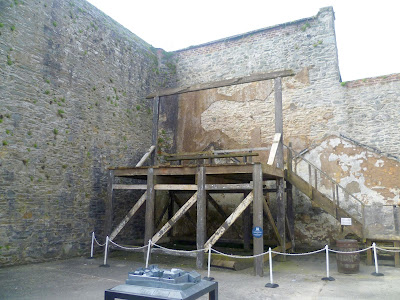 Downpatrick Gaol opened in 1796 and closed in 1830, and, during that period, it housed thousands of prisoners. Most of them were held for very minor offences, like petty theft, or being a public nuisance (which could mean practically anything). But it was also a convict gaol and hundreds of prisoners were held here in its cramped cells before being transported to New South Wales.


The very stones must have smelled of misery and hopelessness. 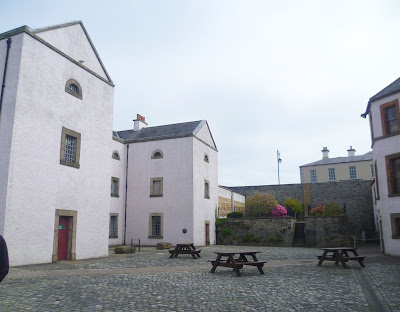 It also held prisoners who fought for Irish independence from Britain in the 1798 rebellion, some of whom were hanged on the Downpatrick Gaol gallows. The most notable gallows victim was Thomas Russell, friend of the staunch Irish republican, Wolfe Tone. Russell met Tone in Paris during the French Revolution, together with another Irish revolutionary, Robert Emmet. Russell, Tone and Emmet were all executed for their beliefs. Russell and Emmet were hanged in 1803, Russell in Downpatrick, and Emmet at Rathfarnham. Tone was captured in 1798 and court martialed. He committed suicide when his plea to die a soldier’s death by shooting was refused.


These were violent times. 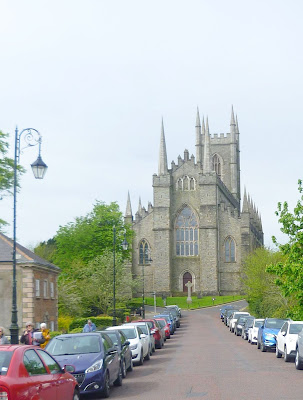 Downpatrick Cathedral, described by John Betjeman as 'the prettiest small cathedral in these islands.'
﻿
﻿
The Romantic poet, William Wordsworth, himself a staunch supporter of the French Revolution, had visited Paris a few years earlier, and famously wrote:


Bliss was it in that dawn to be alive/ But to be young was very heaven.


But he was appalled by the violence unleashed by the Reign of Terror and, when things got too hot, he had no option but to leave his French sweetheart, Annette Vallon, in Paris with their baby daughter, hoping to return when things became more stable. 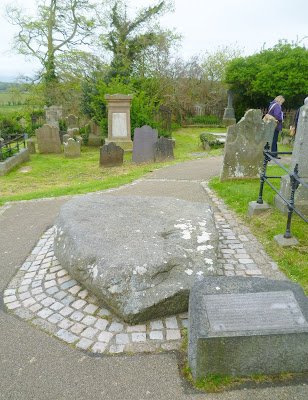 Downpatrick Gaol lasted only from 1796-1830, but they were years of exceptional violence, both in Ireland, in the rest of Europe and in the new United State of America. The scaffold and gallows were swept away and, nowadays, the place is a lively and interactive museum with exhibitions and events, showcasing Downpatrick’s rich history – St Patrick himself was buried at Downpatrick Cathedral in about 461 A.D..

It also tells the story of the gaol’s prisoners. Thomas Russell has not been forgotten. 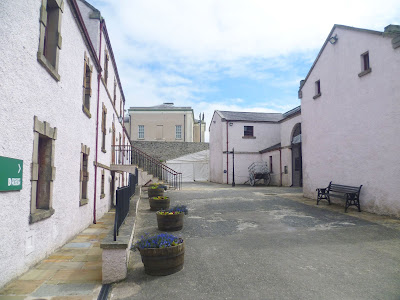 Downpatrick Gaol: the inner prison yard
﻿
The museum’s director, Mike King, told us how the gallows returned to the museum. In 2015, the director of The Frankenstein Chronicles (starring Sean Bean) wanted to film there – and they would build an exact replica of the scaffold and gallows in its original position in the prison yard. With great presence of mind, Mike offered to waive the fee if the museum could keep it once the filming had ended. A lot of school groups visit the museum and he thought they’d love it. He was right.
Gruesome or not, it’s a very visible reminder of the terror the scaffold and gallows must have once inspired.
Elizabeth Hawksley

Macabre indeed. But as you say, perfect fodder for a historical novelist.

It is, alas, true, Elizabeth - and I feel a bit guilty about it. All the same, I can't help thinking of the opportunities it offers for the hero and heroine to show what they are make of; for the villain to try to do his (or her) worst; and for a lot of dramatic tension!

Fascinating, Elizabeth, thank you. Those were indeed violent times to live, but to be incarcerated and have the instrument of your impending death within view must have been sheer misery.

However, I can appreciate that today's young people love being able to see the replica of the gallows!

Thank you for your comment, Melinda/Sarah. I think there was a moral aspect to having the gallows so visible, as well. It's similar to having the 'Condemned Sermon' read by the Newgate Prison chaplain on the Sunday before a hanging (which was on Mondays). It was aimed at the condemned prisoners who sat in front around a table on which a coffin was placed. (Rowlandson did a famous print of it.)

The idea was to get them to repent and confess their sins to a priest and be absolved before their deaths, and so avoid being sent to hell.

The visible gallows in Downpatrick Gaol was also there as a warning of what would happen to an evil-doer if he or she died without repenting.