Latest of my brides by chance

As I've just launched Book Six of my Brides by Chance series, I thought a little excerpt might be in order. This particular heroine has popped up in several earlier stories as the girl who is clearly going to end up a spinster. Her disadvantage is not so much pecuniary as just being too plain and ordinary to "take" as the saying went. She starts out being pushy and desperate, trying to attract the attention of every eligible male. But a couple of stories ago, another heroine advised her to relax and stop trying so hard. She took the advice to heart, but there were still no takers.

Delia is now resigned to dwindling into a maiden aunt. But a chance encounter on the road to Weymouth throws her helter-skelter into an adventure where she meets.... but that would be giving it all away.

The stallion lengthened his stride to a canter. Delia pulled him up as they reached the bridge, regarding it with disfavour. “It looks rickety to me.”
“Give me the reins!”
She relinquished them with alacrity, having no desire to attempt to negotiate the narrow wooden slats leading across, along with the aged and broken railing. Just as Giff guided Tiger’s steps onto the precarious structure, a familiar sound reached Delia’s ears.
Hoof beats. More than one set. And crackling twigs along with the swish of shifting leaves.
“Oh, dear heaven, I think they’re coming!”
“Damn them to hell!”
Her heart leapt into her mouth as the horse took the bridge at a pace that threatened to upturn the lot of them into the river below. The clatter of Tiger’s hooves on the wooden surface sent her senses flying into apprehension.
“They’ll hear that for sure!” Forgetting to be afraid of the crossing, she trained her eyes on the thickets behind and caught movement in the trees. “I can see them! Giff, hurry, for heaven’s sake!”
The horse’s hoofs hit terra firma again and Tiger shot into the forest, going straight through a gap in the trees. Delia looked back, trying to see if their pursuers were on the trail and saw instead the worn path winding away behind them. Oh, help! If those ruffians were able to cross the bridge, they could follow just as easily.
Impatience claimed her as Tiger’s pace slowed. “He’s tiring!”
She saw Giff glance up through the canopy of leaves. Was he finding the sun to guide them west again? “Not far now.”
“How do you know?”
“Should hit a lane at any moment.”
“But what if they get across the bridge?”
“We must hope they’re too faint-hearted to attempt it.”
Delia was not convinced. “They’ve shown nerve enough so far.”
“But not common sense. With luck, one of them at least will fall in.”
At which instant, Delia heard a loud cry and a splash. Elation soared and she laughed out. “They have fallen in!”
She was craning to try and see behind Giff and caught an amused look.
“It’s to be hoped they never find out how pleased you are about it.”
“Pleased? I hope the wretch has broken his leg. But I’m sorry for the horse.” Giff’s laughter echoed in the trees and Delia gave him a buffet on the arm. “Hush, for heaven’s sake! They’ll hear you.”
His brows flew up. “If I ever met such a bossy chit!”
“If it comes to that, I’ve never met such an autocratic fellow!” She regarded him a moment, a little concerned to see strain in his face. “Do you need another swig of brandy?”
He shook his head briefly, his gaze concentrated on path ahead.
Delia studied his face without meaning to, forgetful of everything save his danger. A pang smote her. He mustn’t die! 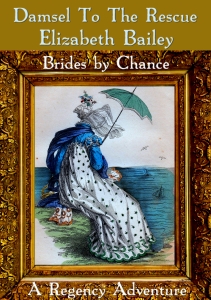 Available at Amazon and other stores:

Posted by Elizabeth Bailey at 8:35 PM

Wonderfully intriguing, Elizabeth, thank you for giving us this little taster!

Hurray for Delia! I love her already.