Lucasta, Gainsborough and the Long Regency

Publishing a new book (albeit a revised one) is always exciting, but searching for a new cover for Lucasta, my latest Melinda Hammond to be re-published on Kindle, turned up a fascinating true story that is the equal of any fiction.

You may be asking yourself why I have included a Georgian romantic adventure in this blog for Regency authors. Lucasta is set in 1780 and it can be argued that this was at the very beginning of a period known as the Long Regency, which covers a much wider time-span than the actual time the Prince of Wales was Regent (1811 – 1820). Generally, the Long Regency stretches from the late 18th century, when the Prince of Wales was coming into his own as a both a fashionable and a political figure, until 1837, when Victoria became Queen (and merited a historical period all to herself)

Lucasta is set around the 1780s, just before the French Revolution and the huge changes in society and fashion that followed. When I needed a cover for the e-book, it made sense to go to the leading artists of the day for my inspiration. And I came across this:


You can see how alike it is to my own cover (included at the end of this blog), which the talented Jane Dixon Smith designed for me.  The original portrait is now in the National Galleries of Scotland. It was painted after 1777, so it fits with the setting of my story (even if the style was influenced by the 17th century painter Van Dyck, so the costume and setting has echoes of an earlier period). When I looked a little deeper into the history of this painting, however, I discovered that the lady's own life was equally as interesting as any fiction.


The Hon Mary Cathcart was born in 1757, the daughter of a Scottish baronet who was at the time Ambassador to Catherine the Great. She was born in Russia and spent her early years there, but returned to England when she was "of marriageable age".  She was married at the age of 17 to a Perthshire landowner, Thomas Graham, in 1774. It is said that he was so love-struck that when she forgot to bring with her the jewels she wanted to wear at a ball, he rode 90 miles to fetch her jewel box.


She suffered from  consumption and her husband took her to Brighton in an attempt to improve her health. It was there she met Georgiana the Duchess of Devonshire and they became life long friends (and possibly even lovers). Gainsborough adored her and painted her three times, including the version shown above, which was exhibited to great acclaim at the RA in 1777.


Mary's health continued to be a concern and her husband took her to the Mediterranean in the hope that a warmer climate would prove beneficial, but she died onboard ship, off the coast near Nice, in 1792. Thomas brought her body back through France, which was by then in the grip of revolution, but his party was accosted by French soldiers and Thomas was forced to stand by and watch while they broke into the coffin and violated his wife's body. He had planned to bury her in France, but after this appalling incident he decided to bring her home: she now lies buried in the mausoleum which he built in the churchyard at Methven.
Thomas never recovered from this outrage and could not look at the portrait again. He hung it with white muslin and later passed it to her sister. Thomas then spent the rest of his life in the army, fighting the French. In the mid 19th century, the portrait was bequeathed to the National Gallery by one her descendants on condition that it never leaves Scotland, and it has been there ever since.


It is a fascinating story, and one that I might never have learned had I not decided that this lady would make a perfect model for my eponymous heroine.


Lucasta is now available on Kindle 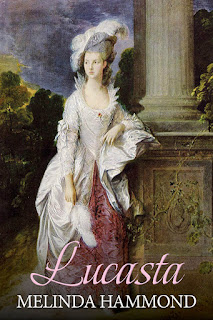 What an interesting story, Melinda - and I love the Kindle cover, too. Poor Mary, no wonder Thomas spent the rest of his life fighting the French. It must have been traumatic to see his beloved wife's body treated in that way.

Thanks, Elizabeth, glad you like the cover. It is a sad story and I can quite see why Mary's husband couldn't look at the portrait after her death. It has proved one of the National Galleries of Scotland's most popular exhibits, and it even inspired an advertisement for a bra back in the 1950's!

That's a fascinating story, Melinda. How interesting to go looking for the background of the portrait. I knew this image, but had no idea of what lay behind it.

It was sheer chance, but I am so pleased I delved a little deeper into her life. Thanks for dropping by, Elizabeth.