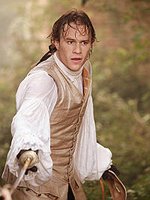 Last week I went to see the film Casanova starring Heath Ledger and Sienna Miller. I hadn’t seen either of these actors in a historical drama before and I have to admit I was curious, especially to see whether Heath could carry off the role of the legendary rake! It was no Pride and Prejudice, in fact a friend of mine said it should have been called “Carry On in Eighteenth Century Venice” but despite that I enjoyed it. It was a romp and there was some fun dialogue and some good plot twists. The thing that struck me about it, though, was how strong and spirited all the female characters had to be, from the heroine disguising herself as a man in order to get into the university and campaign for rights for women, to her mother conveniently pinching the daughter’s fiancé! It seems that in both books and films now the female characters have to be strong and forge a future for themselves, regardless of how true (or not) this is to historical accuracy. As someone who writes strong heroines and enjoys reading about them, I’m not criticising although I do wonder whether this says more about audiences these days than the times we are writing about. On the other hand, most of Jane Austen’s heroines were strong in their own way and in keeping with their times. Lizzy Bennett was secure in her own accomplishments: “I am no longer surprised at you knowing only six accomplished women. I rather wonder at your knowing any.” And Anne Elliot was quieter but still an admirable person, generous, calm in an emergency, thoughtful and wise. We can still identify with these characters today.
Posted by Nicola Cornick at 4:25 PM

I like strong heroines too, but not at the expense of historical accuracy. As you say, Austen wrote strong heroines, and Jane Eyre and the Tenant of Wildfell Hall have strong heroines. I suspect many, many women writers have written strong heroines (Christine de Pizan, for example, populated her City of Ladies with them), because they themselves identified with heroines who were intelligent, able to express themselves, and a little (sometimes more than a little) unconventional.

Well, I'm very biased towards strong heroines or I'd have never written a lady soldier. An 18th century strong heroine who was part of her time and whom I always think back to as a role model is Moll Flanders, eponymous heroine of the novel written by Daniel Defoe. The TV drama which was on a few years ago with Alex Kingston playing Moll was also great fun.

Exactly - strong heroines don't need to be out of keeping with their times, and a woman can be a strong character without being forced into a historically absurd role. I enjoyed The Lady Soldier by the way, Kate, having found out about it here. I was interested that at the end Jem accepts a traditional female role as Tony's wife (even if they do go to live in the country away from the social whirl) - was this because she would have to do this to be socially accepted? (As well as being madly in love with Tony, of course!)

Hi Carla! Good question. Actually I started imagining some scenes after Jem and Tony were safely tucked up in the country and I'm not entirely sure she is willing to give up wearing breeches entirely or become 100% conventional. ;)

She plays by society's rules in London because to do otherwise would potentially damage Tony and his family and she does not want to do that.

This film is on my "to be seen" list, along with Jonny Depp's The Libertine.

Nicola - I think you are right that today's audiences wantstrong heroines, but as you point out there are different types of strength: some heroines quietly get on with their lives and get their own way almost without anyone knowing it (I would put Anne Elliott in that category).