Praise for The Social Outcast 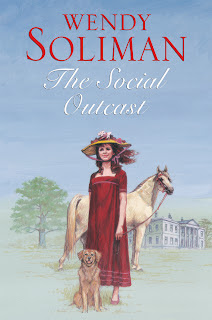 The Social Outcast is only my third novel and I still haven't got used to reading reviews, and accepting other people's opinions, about my books. That being the case I was delighted when the Red Roses for Authors Review said the following nice things about it.

Soliman has created a delightful character in Eloise Hamilton. The illegitimate daughter of a wealthy banker, Eloise has accepted that she can never marry a man of high birth. Therefore, she will not allow herself to repine over the fact that the man she loves has become engaged to a woman she cannot like.

Eloise concentrates her love on her beloved horse and dog, treating Harry Benson-Smythe as simply the friend he has always been. She is at first flattered by the attention of a duke's son, who comes calling on her father, though she soon learns to dislike and distrust Lord Craven. He is in business with her father, but believes himself cheated and his pride leads him to a foolish attempt at revenge on Eloise's father. This places Eloise in a dangerous situation, from which she is extricated by Harry - but only with serious consequences.

Will Harry finally wake up to the fact that he is in love with the scamp who is forever in some scrape - and will Sir Henry Benson-Smythe accept a girl who is so far beneath them socially? Find out by reading this enchanting book! I enjoyed it and award five red roses.
Posted by Historical Romance Author at 9:50 AM