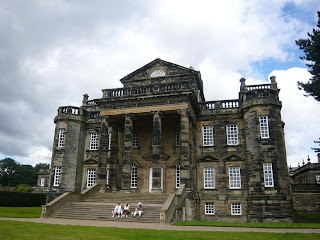 A couple of weeks ago I was in Northumberland, and went to visit one of the National Trust's latest acquisitions, Seaton Delaval Hall.  It is a beautiful 18th century baroque mansion by Vanbrugh, and staggeringly beauiful on the outside. 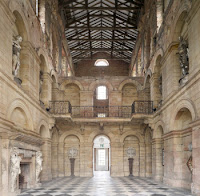 Unfortunately, the central hall is now merely a shell, after fire ripped through the building in 1822. An entire wing was destroyed and never rebuilt (although as the wing had upset the symmetry of the building, this may not have been such a disaster!). It is thought that Vanbrugh's deisgn helped to spread the fire, the stairwells in the corners of the building acted as a chimney, turning the blaze into a furnace that buckled the metal balustrades and caused the lead to melt from the roof.  The centre of the building was eventually re-roofed but never re-occupied.  In 1841 the architect who designed Newcastle's Central Railway Station, John Dobson, was brought in to carry out a few renovations, but then the building was left until the 1950s, when the next round of renovation began. These preserved the building, but it was never restored, and now the National Trust have embarked upon a major conservation project, designed to preserve the building as it is, rather than restore it to some by-gone glory. 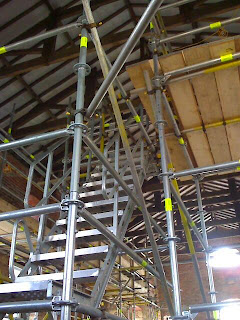 We visited on the day of a dog show, so there were hundreds of  visitors and their furry pets in the grounds, but inside the house itself we were in for a treat. The magnificent central hall, seen here before the restoration project began, is now filled with scaffolding and the National Trust is allowing small groups of visitors to climb the scaffodling to get up close and personal with the fabric of the building.  Wearing a hard hat and clinging tightly to the scaffolding, I followed the guide up the metal steps. We passed the remains of plaster statues inset in the wall arches and eventually stood at the upper floor level, where the small fireplaces from the servants rooms could be seen, and looking closely between the damaged stones it was still possible to see little rivulets of lead that had melted in the intense heat of the fire. I have only added one picture of the scaffolding - its not very exciting, but it give syou some idea - just think of me, hard had on and suffering from vertigo!
It was a chastening experience, to see such a lovely building in such a sad state of repair, but thanks to the NT and the fund-raising efforts of rthe local people the house has been saved for everyone to enjoy. I haven't yet included a serious house fire in one of my books, but after visiting Seaton Delaval, I think it is only a matter of time!
Sarah Mallory.
Dangerous Lord Darrington (USA Sept 2011)
To Catch a Husband (UK 2011)
Posted by Historical Romance Author at 6:35 AM

How lovely to see a beautiful house being repaired and restored. It looks wonderfully magnificent on the outside!

It's a gorgeoius building, Jan, but apparently was cold and draughty to live in - more for show than comfort!

Somewhat spooky. did you hear ghostly minuets? Or did the hard hat getin the way?

The hall wasn't as spooky as the extensive basements - or perhaps it was just that the drumming of my raised heartbeat drowned out those minuets when I was up on the scaffolding!

How exciting to be able to go up the scaffolding to see the repair work in action, Sarah. That's exactly what the NT is planning with the current conservation work at Ashdown. I think it's great to be able to see an aspect of the house you wouldn't normally have access to. And what a magnificent place!

Thanks Nicola. It was great to do something a bit different, and to see the damage up close made it all the more shocking.

Most enjoyable post, Sarah. I visited Seaton Delaval years ago as a child - it was great to see it again.

Elizabeth, there is such a lot of local support for Seaton Delaval! It is so encouraging to know how many people really do value these old houses.