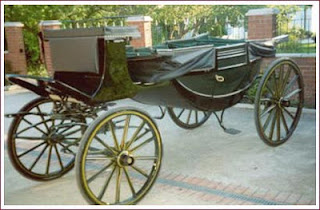 I recently read a book purporting to take part in the Regency where the hero, the testosterone-loaded, aristocratic leader of fashion went tooling around the countryside in a landau.
For those of us in the UK, a landau means the Queen at Ascot, a posh four-seater pram on wheels, with outriders. In the era of carriages, the landau was little different. It was a vehicle popular with widows and married ladies of a certain age, and it was strictly a town vehicle, since it was low-bodied. The rough roads of that time would have ripped the vehicle to shreds. And it was definitely a carriage to be driven in, not to drive oneself. I could see a hero driving a curricle or a phaeton, or even taking a turn at driving his own travelling carriage.
Georgian roads were rough and rutted. Vast improvements occurred later, and slowly, with the various Turnpike Acts and the improvement of road structure, with macadaming, but for most of the period, the roads were bad. Even the relative luxury of a post-chaise, a privately hired vehicle, was limited, because the carriage was running on the same roads.
By mid century, suspension had improved greatly, so at least people could sit instead of being thrown around like eggs in a basket. For the most part. But the quality of roads was extremely variable. It depended on the remoteness of the place, the wealth of the people living there, and the local terrain. A stony environment might have better, if rougher, roads than a sandy one. Roads were largely the responsibility of the people living in the vicinity, so if there was a wealthy farmer, or an aristocrat who wanted the road, then they would pay for it, or contribute towards it. Hence the turnpike.
They were companies who required investors, and they recouped the costs by charging travellers. There are still toll-roads around today, and toll-bridges, too. The toll road movement helped enormously to improve the quality of the roads.
Travelling carriages had to be robust, for the most part. Young gentlemen taking high-perch phaetons on a normal road were literally taking their lives into their hands. The fall could kill them, but a low-bodied vehicle would be torn apart. On smooth, well-kept roads like the one from London to Brighton in the Regency, you might see such vehicles, but not on the outlying country roads.
Many travelling carriages started to be fitted for comfort with padded seats, but few meant for long distance had glass in the windows. In an accident, glass was a serious hazard, and if you survived your carriage overturning, you might die from the broken glass slicing you. They did have leather blinds that could be pulled down.

And passengers had portable comfort stations, small bordeloos they could use as discreetly as you can in the close confines of a carriage, and then tip the contents out of the window, always being careful of the wind direction, of course! They carried blankets, had hot bricks made up for them at the coaching inns, and thick, practical cloaks. Very few people travelled any distance in their best clothes, because they would be a mess by the end of the journey.
Journeys weren’t to be taken lightly, either. London to York took three days for much of the period, with stays at sometimes very ropey inns. Wealthy passengers would travel with their own sheets and linen to avoid bedbugs.
Then there was the stagecoach. This carried passengers at a reasonable price to and from all the major cities and towns in the country. Travelling inside was more expensive than travelling outside, but the coach crammed people in, together with some merchandise like luxury goods, and all the luggage. They were built for durability and strength rather than comfort or attractiveness. Coachmen were notorious for their stamina and their rich use of the language, adding to the characters who thronged the Georgian stage.
It’s very surprising that any travelling carriages survive, but they do. They can be seen in all their variety in museums and stately homes, and some old gigs are in use even today.

In some places, the state of roadways is still a problem even for modern vehicles. I'd hesitate to drive a Corvette, for example, on some rural roads in the Midwestern state in which I live. Merely tooling around the small town in which I live can require careful attention to potholes if one wishes to avoid throwing the wheels out of line or saving the muffler from destruction. Plus ca change, I guess.

I enjoyed your post, Lynne. It reminded me of the dreadful Mrs Elton in 'Emma' whose sister in Bristol has her 'barouche-landau', a vehicle Mrs E. plainly thinks wins in the one-upmanship stakes!

And Anne Elliot, of course, 'becomes mistress of a very pretty landaulette', which presumably could cope with the local roads.