I’m a great believer in periodically de-junking one’s life. I do try not to hoard things but I’m not a natural minimalist and clutter keeps creeping in. I enjoy having ornaments around which friends have given me. I like buying unusual earrings and necklaces in foreign street markets. And, above all, I love collecting books. 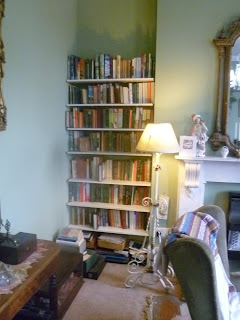 However, I realized that enough was enough when I found myself blowing dust off all those little ornaments rather than dusting them properly. There were just too many. I’m asthmatic and the result was Not Good. Time for a change. I gave them a proper wash, put a few aside to keep, and said good-bye to the rest before taking them down to Oxfam.
I’ve also learnt to be more ruthless about my wardrobe and chuck things I don’t wear. These days it’s strictly buy something new and something old has to go. It doesn’t always work but I’m a lot better than I used to be.

Then there are the books. I have over two thousand. There are bookcases in almost every room and on the landings, and most of the alcoves have shelving for books as well. I was getting to the stage where they were beginning to pile up in the corners of rooms. Well, if I’m honest, there have been piles of books on the floor for years but I hadn’t seen them. Now I did.

So, this week, I’ve been tackling the books. A number of academic books from my M.A. course went – they are out of date now. I re-read those novels I wasn’t sure about and was surprised how many I was happy to let go. I’d loved them once but now they no longer appealed in the same way. Then there were books which I’d been given but didn’t really want. I’d thanked the donors nicely and now the books could go. The charity shop would get some money, I’d get some space. 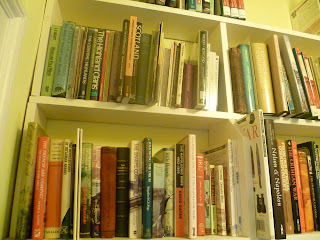 The real problem is with the thousand or so books which comprise my research library - and I'm sure my fellow novelists know the problem. As a Historical novelist, we need to check on not only the obvious things like housing, costume, travel, food, wages and so on, but also more obscure information. I have books on smuggling in Cornwall in the early 19th century; theatrical lighting (candles, paraffin lamps and, later, gas) in the mid 19th century; an entire shelf on Wellington’s army in Spain during the Peninsular War; how refugees fleeing the French Revolution managed to support themselves in London, and a host of other out of the way subjects. It’s much more difficult to prune books here.

Nevertheless, this week, in six separate visits, I managed to take over one hundred books to the new Oxfam Book Shop in Islington. So, can I now report that my bookshelves are inspiringly freed up? Not quite. But I can see a lot more of my floor! What’s more, I feel incredibly virtuous.

And it’s a lot cheaper than therapy.


Posted by Historical Romance Author at 9:48 AM

Respect, Elizabeth! I am a terrible hoarder and not having moved for many years "stuff" has accumulated everywhere! And you are so right about the books - I have outgrown quite a few, but can't quite bring myself to part with them yet, and the research books, well, they might come in useful again....

No, I must be ruthless - I shall try to copy your example and clear some space!

I know just what you mean by not quite bringing oneself to chuck out an old book. The thing to remember, Melinda, is that you can do it gently to begin with. Put half a dozen books in a bag ready to go and leave it in a suitable corner. It's like a halfway house. Then, when you feel ready - take them to the charity shop.

It's not about masochism; it's about freeing yourself from clutter and feeling good about it!

Woo hoo, Elizabeth Hawksley, Life Coach... I like it.

I shall try, Elizabeth, I really will :-)

Sorry! I was having a Dawna Walter Life Laundry moment!

I got rid of hundreds of books when we moved last year but have been slowly adding research books to my shelves. Latest are three Robert Opie scrapbooks -love them -but they are so HUGE!

Getting rid of junk and clutter is so liberating, but I don't think I could ever regard my book collection as junk.
I know I should thin it out, but I'm not nearly as brave as you, Elizabeth.
I have this certain knowledge that as soon as I got rid of something it would be the one item I desperately needed next day.
Well that's my excuse and I'm sticking to it - even though we might soon have to move to a bigger house to cope with all my 'stuff' x

I agree with you, Fenella, research books can be huge. My 'Coaching Days of England' is 15 and a half inches by 21 inches! It won't fit on a bookshelf and lives under my writing desk.

You are right, Rena, books are never junk but they can still take over one's space. I tell myself that, if they go to a charity shop, then someone else can enjoy them, too.

I am so impressed, Elizabeth.I'm a shocking hoarder and recently realized I'm drowning in clutter — mainly books, knick-nacks, papers and craft & sewing materials. Of them all, books are the hardest for me to get rid of.

Only this morning I had 6 boxes of "stuff" taken away in a charity collection and one box was of books. When I put them out I was a little torn, but once all the boxes were gone I felt so proud of myself— and inspired to make another collection to go.

Sincere admiration, Elizabeth. I've been doing a similar book-sort-and-, disposal, but gently over several months so I can bear the pain! When the chap who drives the British Heart Foundation charity van arrives each month his face drops at the weight of books in the bag. But I now have a passage of clear carpet from the door to my desk, and no longer risk breaking my neck.

Brilliant, Anne! It is painful letting go, especially of books. You deserve a halo!

Jane, I do understand the 'clear carpet' problem, or rather, the lack of clear carpet!

It's very encouraging to know that I'm not the only one with a clutter problem!