I’m lucky enough to live in a Regency terraced house in Islington, a typical example of early 19th century speculative building. My street was built in sections of about ten houses, which were then sold to finance the next stretch, and so on. My section was originally called Claremont Row and dates from 1818. The name pays tribute to the memory of Princess Charlotte of Wales had died in childbirth the previous year, and lived at Claremont House.

At the top of the street, there is a section called Brunswick Terrace which neatly indicates the builder’s support for Caroline of Brunswick, the Prince Regent’s estranged wife. One might argue that both these names make a political statement: the Prince Regent was unpopular for his extravagance. 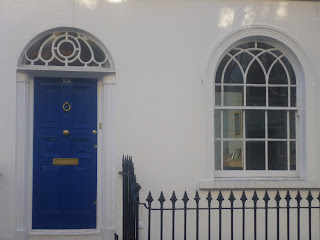 At first glance, the houses look uniform but look more closely and you’ll see that in each section the windows, fanlights, balconies and door knockers are slightly different, and some are very attractive. Others have been altered by time, not to mention the Luftwaffe, which demolished most of the opposite side of the street in October 1940. The result is that there isn’t a right angle in my house!

So, what sort of people lived in my street? It was built to service the posh folk living in the nearby squares. Typically, there are a few small shops at each end, and the rest of the street housed the respectable working class. My house was a baker’s shop and has a large front window to display the baker’s buns and bread. The oven in the basement produced a huge amount of black, gritty-tasting coal dust – as I discovered when the house was re-wired. Still, at least the house must have been warm!

﻿﻿Next door was owned by a master tailor, and then came the inevitable pub. The middle houses were in multi-occupancy with commercial clerks, milliners, needlewomen, cooks, shop assistants and many other trades, together with their families.
﻿﻿


﻿A short walk takes you to the much classier Richmond Avenue, built in the Egyptian style. Here, obelisks and sphinxes the size of lions guard your front door – a proud reminder of Nelson’s destruction of Napoleon’s navy in The Battle of the Nile in 1799. Nearby is the Albion, an old coaching inn. Cricket was played here on summer evenings and cows grazed nearby. Nowadays, the old stables’ stalls for the horses have been turned into cosy retreats for customers. The cobblestones are still there, though, and you have to watch out if you’re wearing high heels.

I enjoy living in a Regency house. I like the high ceilings and the pleasing proportions. It has two rooms on each of three floors (the basement is now a separate flat) so there are a lot of stairs. Still, trotting up and down all day – my study is at the top of the house – is doubtless good for me.

Great post, Elizabeth, thank you. I love seeing these old buildings and using them to build up a picture of how London used to be. Love the Egyptian influences, too, the inhabitants must have felt a real sense of pride every time they went in and out of their houses!

Lovely photos of the area.. thanks so much..

Thank you Sarah and Girlygirl for your comments. Every time I walk past the houses with the sphinxes, I think, 'I want one of those'! On the plinth underneath the obelisks, the word NILE is engraved.

Hi Elizabeth!
Great post! I am an architect and I really love how in London coexists this amazing Victorian architecture with the glass and the steel modern one! I recently came up with your blog and I really enjoyed going through your articles! the reviews are amazing and really well written! hope to keep going on them!I was wondering if you, and some other members on the blog, would be interested in sharing your posts and ideas on Glipho? I bet that our users would love to read your amazing stuff! It's a quite new social publishing platform, where you can connect to every social network accounts, really easy to use it and communicate with your followers. In additional, you are able to import the posts from your blog in a super-easy way without affecting it at all.
Please, have a look and take a tour to know more about http://glipho.com/
If you would like to set up your account, please do not hesitate to ask me for further information and I will send you an invitation.
I hope you will join our Glipho community soon.

Lovely, Elizabeth. I did the North Clerkenwell walk with Old Maps recently and found the building history completely fascinating!

Great seeing these images. I used to live at 72 Richmond Avenue before it was smart. Seeing the photos brought back happy memories. The old shop used to be called the Dairy, where we bought our bacon and eggs.

Unknown said...
This comment has been removed by the author.
11:54 AM