We all know that diamonds are a girl’s best friend, but in the past there was another type of jewel which was just as highly prized – pearls.

I recently went to see an exhibition at the Victoria & Albert Museum here in London which was dedicated to pearls and told the story of this precious natural phenomenon through the ages.  I found it absolutely fascinating! 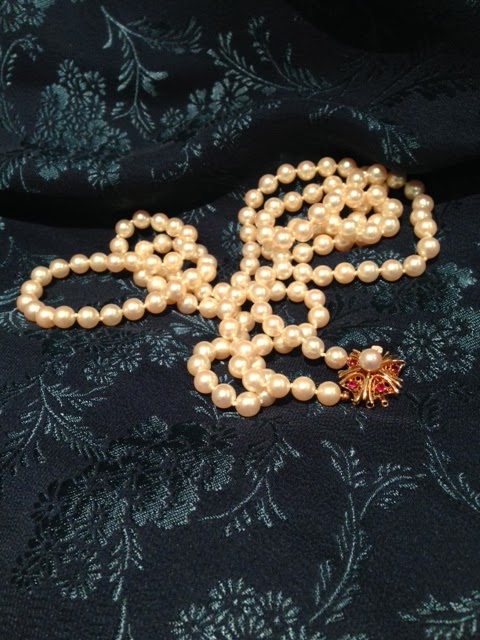 Never having given it much thought, I had always believed that pearls came mostly from the Far East.  I was therefore surprised to find that in the past, the majority of them originated in and around Qatar and the Arabian Gulf.  The pearl fisheries there have existed for thousands of years apparently and pearls from that region made their way to Egypt, Rome and the rest of Europe even in ancient times.  The next largest supply came from between southern India and Ceylon.  Finding them was hard work as only one in every 2,000 oysters actually has a pearl inside it!

Another surprise for me was the fact that pearls are not formed from grains of sand that have happened to enter an oyster.  That is just a myth and never happens.  Instead, it is usually parasites of some sort that trigger the beginnings of a pearl.  Cultured pearls, pioneered by the Japanese businessman Kokichi Mikimoto, are not formed from sand either, but by a different and rather complicated technique that involves a tiny piece ‘donated’ by another oyster.  (This was not developed until the early 20th century.)

Pearls have a natural sheen and, unlike precious stones, don’t need to be polished in any way.  (I’ve been told that the more you wear them, the shinier they become, presumably because of being in proximity to the wearer’s skin.)  The exhibition showed that even the ones that were not perfect were put to good use by jewellery makers.  Some weirdly shaped ones formed for example the torso of a fish or insect and were made into a brooch or pendant using a gold or silver setting.  One had even been made into a miniature Statue of Liberty!  They come in lots of different colours too – grey, pink, black and brown are just some of the available shades – but for me, the white ones are the most beautiful.

Many women wore them as symbols of purity and virginity.  Owning vast quantities of pearls (and wearing an awful lot of them all at once, either as jewellery or sewn onto garments) was also a symbol of power and riches.  There were some magnificent necklaces, tiaras, brooches and other kinds of jewellery on display at the exhibition and the most fascinating were those with a known provenance – for example, there was a single pearl earring which had apparently been worn by King Charles I at his execution!

Pearls go in and out of fashion, but one thing never changes – their incredible beauty.  The warm, creamy lustre can’t be improved upon (although a setting of diamonds makes them shine even more!) and no matter what type of jewellery is made out of these natural miracles, they can be guaranteed to enhance the wearer’s outfit.  I’m sure they will continue to be appreciated for centuries to come.

This was fabulous to read. All those poor little oysters. And yes medieval wedding gowns for the wealthy were often pearl - strewed. The virginity thing and to think I never really clicked until I read this. Thank you.

Glad you enjoyed it, Carol, thank you! Yes, I felt very sorry for the divers who had to collect so many oysters with so little gain!

I, too, saw this exhibition. It was wonderful. The sheer size of the great ropes of pearls worn by the Indian maharajas was staggering.

It was a real thrill to see actual pearls that had been worn by, say, Lucrezia Borgia.