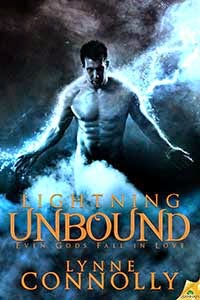 There's a huge story under this book. I started with the simple "what if?" but I've gone onto develop this world over several years. Then I found the perfect editor to help me - Amy Sherwood of Samhain Publishing. She's as enthusiastic about the series as I am, so we've been working together on this, and now the first book is out!
Lightning Unbound is the story of a Georgian aristocrat. It's also the story of one of the ancient gods of Rome. It turns out that when gods die, their bodies perish, but their attributes pass on to the nearest unborn child. Thirty years before the series starts, the gods' old adversaries, the Titans, set a trap for them and they perished in an explosion that rocked England. The Titans want their world back. As far as they're concerned, the gods are the rightful masters of the human race. Everything started to go wrong when humans declared their independence from dictatorship and lived according to rules they set. On the other hand, the Olympian gods want people to continue to have free will. They will fight to the death for that, and thirty years before the series starts, they did just that.
Yes, I know, it's a bit different to the straight historical romance I usually offer. I tried, I really did, but this series had to come out. It just flowed, although working some of it out was tricky, as you can imagine.
I've kept the historical details as close as I possibly can. I've just worked hard to read between the lines!
I read in one of my textbooks that the aristocrats of Georgian Britain were treated like gods. So, I thought, what if they were really gods? What if there was an underlying war, fought in the ballrooms and stately homes that most people remained completely oblivious to?
You can read an extract from the book here
And you can buy the book here