What happened to the rubbish? 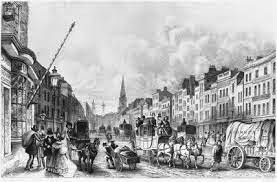 In London there were street sweepers employed to remove household waste and horse dung. However only the roads of the wealthy were immaculate and the poorer areas were filthy as no one could afford to pay.
In the 1750s the parishes were responsible for hiring roadsweepers, so again places like Whitechapel with almost 1500 houses and only four roadsweepers must have been appallingly unpleasant. 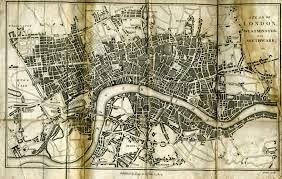 These people would come by every day, except Sunday and holidays, ringing their bells. Occupants could bring out their rubbish and throw it in the carts – anything could be in these carts from human and animal dung to dead cats and dogs.
At night the night soil collectors cleaned out the privies and cesspits – I don't suppose the rich areas had a problem with this.
There were in fact people called Dustman who just collected dust. They had a high sided cart and took it to a dust yard. A dustyard was a big operation and could have as many as 150 people working there. A dust heap at Gray's Inn Lane was sold for £20,000 ! In 1848 somebody had the bright idea of combining sewage and dust and sold manure cakes to farmers and gardeners for five shillings a cart full.
Families sometimes worked on this dust heap. The man brought it in, the boys took it to their mothers and put it in a wire sieve called a shifter, and then they rummaged through looking for rags, bones etc which could be sold for money. Dustman were relatively well-paid – ten shillings a week in some cases.
There was also a busy market in collecting dog poo – this was called 'pure'. Tanners were the main purchasers. Old ladies were often seen walking round the streets with a bucket and scoop collecting this from the pavements.
There were also the mudlarks who worked on the Thames, which was literally knee deep in human effluent and other unmentionable things. I can imagine the smell in the summer was overwhelming. These river scavengers would look for anything of value such as copper, cold, and also  bones and metal pieces which could be salvaged and sold.
Another source of unpleasant odours were the of coal fires which belched out soot and carcinogens into the air.The ash from these fires also had to be disposed of.

No wonder the wealthy deserted London after the Season and remained in the country where the air was fresher and healthier.

Fenella J Miller
Posted by Historical Romance Author at 8:56 AM

Thank you for your interesting post, Fenella. How grateful I am to live in the 21st Century!

We rarely meet the rubbish collectors in fiction, except poor Jo in Dickens' 'Bleak House', scratching a living sweeping the road clear for passers by in the hopes of a penny - and always being told by the police to 'Move on.'