The Waltz -- what was it really?

Waltzing is a thorny subject in historical romance, because it's often not what people think it was. I was startled in the new BBC War and Peace to see people whirling around in the Viennese Waltz.

I had to check the text, where I found that was what Tolstoy had written -- but he was writing the book in the 1860s and obviously hadn't done his research!

On the other hand, it isn't clear exactly what the waltz was in the early decades of the 19th century.  Most references make it clear that it was like a regular line dance of the time but with a section in which the couple turned together, in one another's arms. It also kept the couple together throughout, which was different to the usual country dance in which the dancers moved among others. 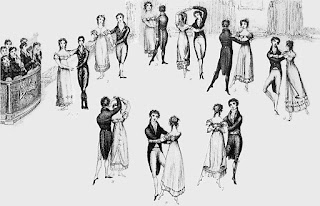 This picture comes closer to my idea of the Regency waltz and fits with a demonstration I saw years ago. Or this, though it's more exagerrated. 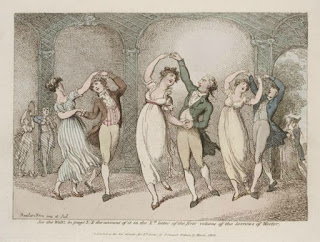 "Far too much intimacy," the critics complained. "Bound to lead to ruin!"

Here's a reenactment of a more sociable version of the same thing.

Byron, who could hardly be called stuffy, railed against it in 1813, but implies much more constant togetherness, and the typical waltz hold, face to face. Ah, if only they'd had photographs back then!
There's a full version of the poem here with interesting annotations.

"Endearing Waltz!—to thy more melting tune
Bow Irish Jig, and ancient Rigadoon.
Scotch reels, avaunt! and Country-dance forego
Your future claims to each fantastic toe!
Waltz—Waltz alone—both legs and arms demands,
Liberal of feet, and lavish of her hands;
Hands which may freely range in public sight
Where ne’er before—but—pray “put out the light.”
Methinks the glare of yonder chandelier
Shines much too far—or I am much too near;
And true, though strange—Waltz whispers this remark,
“My slippery steps are safest in the dark!”
But here the Muse with due decorum halts,
And lends her longest petticoat to “Waltz.”

"The Ball begins—the honours of the house
First duly done by daughter or by spouse,
Some Potentate—or royal or serene—
With Kent’s gay grace, or sapient Gloster’s mien,
Leads forth the ready dame, whose rising flush
Might once have been mistaken for a blush.
From where the garb just leaves the bosom free,
That spot where hearts were once supposed to be;
Round all the confines of the yielded waist,
The strangest hand may wander undisplaced:
The lady’s in return may grasp as much
As princely paunches offer to her touch.
Pleased round the chalky floor how well they trip
One hand reposing on the royal hip!
The other to the shoulder no less royal
Ascending with affection truly loyal!
Thus front to front the partners move or stand,
The foot may rest, but none withdraw the hand;
And all in turn may follow in their rank,
The Earl of—Asterisk—and Lady—Blank;
Sir—Such-a-one—with those of fashion’s host,
For whose blest surnames—vide “Morning Post.”
(Or if for that impartial print too late,
Search Doctors’ Commons six months from my date*)
—Thus all and each, in movement swift or slow,
The genial contact gently undergo;
Till some might marvel, with the modest Turk,
If “nothing follows all this palming work?”
True, honest Mirza!—you may trust my rhyme—
Something does follow at a fitter time;
The breast thus publicly resigned to man,
In private may resist him—if it can."

*Clearly he believed that the intimacies of the waltz could lead to urgent marriages. It all feels a bit extreme, even for Byron, so what exactly was the waltz that upset him so?
There's an interesting discussion of the subject here.

How do you envision a waltz in a historical romance? How do you want it to be?

It is amazing that there is such a lack of conformity about the information on the 200 year old waltz. Thomas Wilson did the dance instruction and planning for the theatre and had a dance academy where he taught dance. He published several books on the subject. I haven't seen his book on Belgian, German and French dances. However, I would think he would know the subject-- even if only what was taught at his school. In his Companion to the Ballroom he says that aristocrats had their own dance teachers and that their balls and dances might differ some from what he says. I go with Byron who we know attended some of the waltz parties held by aristocrats.

I've just been looking at the Dolmetsch Dance Society book 'The First Refinement' on early 19th century dance. It seems to suggests that the waltz was originally part of a line dance. It gives the basic step: 'a plie in preparation, step up and forward on the first beat of the bar with the weight well over the leading foot, then take two further steps on the ball of the foot.' It adds that this step 'was probably a continuation of the baroque pas de bouree or fleuret.'

For a turning waltz there are several steps to choose from. The simplest involved the ballroom hold where partners face one another and the gentleman places his right hand firmly in the centre of the lady's back; he takes her right hand in his left, his hand below hers and both elbows bent. The lady places her left hand on the point of the gentleman's shoulder. Both partners hold their heads slightly to the right and slightly down.

For 'Lord Wellington's Waltz' (1810) it says, 'The gentleman follows his partner round the first couple; the lady follows him back; lead down the middle and up again.'

It all sounds incredibly complicated. No wonder they had Waltzing classes!

I was surprised by the waltzing sequences in W & P too, but let them off because Russia is a foreign country and since the waltz came to us from Europe I could make myself believe they might have their own turning dance :-)

Everything I have read is more in line with your research, Jo, with the waltz starting off fairly slow and moving into a quicker, twirling sequence towards the end. Definitely nothing like the modern waltz. However, Elizabeth's description of the turning waltz sounds much more like the waltz as we know it today.

With so much confusion, who can be sure?

You might all be interested in this article I found here; http://walternelson.com/dr/waltz-postures
where it says
The waltz had distinct sections, which had different steps and different postures which suited those steps.
1. The Marche (a brief promenade at the beginning of the waltz)
2. The Pirouette or Slow Waltz (a turning figure, with a smooth step, a variety of sometimes rather racy postures and strong eye contact)
3. The Sauteuse (the tempo increases and a hop is introduced into the dance)
4. The Jetté (the tempo increases more and the dance becomes an energetic series of hops).

And it was performed in the way nowadays we'd perform a sequence dance - that is, all the couples would be doing the same figure at the same time - NOT like modern ballroom where it can be a bit of a free-for-all.
So, at some points during the dance, the hold might be similar to modern ballroom hold, with couples face to face, but there's a lot more to it!
If you've seen the film Young Victoria, the young queen dances a waltz with Albert, and it looks pretty authentic.
Agree with Linda though - seeing the Vienese waltz performed in War and Peace was a bit jarring!

Annie, years ago I wrote "Dance for a Diamond", which followed the sequence for the early waltz, the Marche, Sauteuse, & Jetté i.e. slow build-up with the story getting faster as it hurtled towards the conclusion!

Fascinating that such a famous dance is so shrouded in mystery

Not sure we should assume that Tolstoi hadn't done his research. The waltz was prohibited by Tsar Paul in Russia and he was assassinated in 1801 so we're talking about the waltz in Russia in the later 18th century.

Wikipedia quotes sources for Germany and Austria in 1770s with references to bodies pressed together in a "shameless, whirling dance". It wasn't like that in England but we shouldn't assume Russia was like England. It clearly wasn't.