Hidden in the Wardrobe

It's spring, that time when I feel a most uncharacteristic inclination to clean and tidy. Whether this is a throwback to my childhood, when spring cleaning was quite a thing in my grandmother's household, or whether it's that I have just emerged blinking from writing my latest book, I find myself sorting out books and clothes and even occasionally wielding a duster.

The change over of winter to summer clothes is always fraught. Is it too soon to cast a clout? The garden seems to be flowering earlier and my lighter clothes are emerging earlier too. Which reminds me that it isn't only clothes that we keep in the wardrobe.

Recently I was talking to an author and publisher about re-discovering the romance books of my youth. By youth I’m talking about the very first books I read that could be described as being romantic, before I devoured Georgette Heyer or Jilly Cooper. I was about twelve years old. They included family sagas, romantic suspense – I remember Spindrift by Phyllis Whitney - and The Property of a Gentleman by Catherine Gaskin. I loved discovering the Gothic suspense of Victoria Holt, and packed amongst the historicals were some of the raunchy 1970s contemporary novels. What an education they were.

I found all these books in my grandmother’s spare room wardrobe, tucked away amongst her evening dresses and smart clothes. The same cupboard contained her scent bottles and her jewellery.  Oh, and there were shoes too, beautiful shoes in different colours not like my brown school ones! My grandmother was a well-dressed lady but these were not the clothes she wore every day. These were special, packed away carefully in tissue paper and plastic bags, smelling of perfume and mothballs. As a result, the books smelled of perfume and mothballs too. They were lined up so you could see their spines yet when the wardrobe doors were closed you would not have known they were there.

My writing friends and I were discussing this and one of them recalled finding Hardacre, a classic family saga set from the Victorian era to the 1950s, in his mother’s wardrobe too. He suspected she had hidden it away because it had a single swear word in it. (Naturally he read the book and found that one word.) This set me thinking about wardrobes and the things people hide in them and why.

The first “wardrobes” were actually rooms in palaces or grand houses where the nobility kept their clothes.  For royalty this meant the place that the king kept his clothes, armour and treasure, and as a result, in medieval English government the “wardrobe” grew to become the royal palace’s accounting department, hence the role of Keeper of the King’s Wardrobe being so influential.

Ordinary people however, used chests to store their clothes. It was from these cupboards the modernth century. Here is my Regency-era hanging wardrobe, which I bought from Ebay! 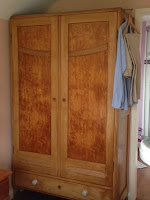 wardrobe or freestanding “closet” emerged. There are examples of such “hanging cupboards” in the US that date from the 17

There’s something about wardrobes, isn’t there. Perhaps it’s the fact that you can lock things away in there. Perhaps it’s that they are big enough to hide in. And they are dark inside. The book by CS Lewis, The Lion, The Witch and the Wardrobe uses the wardrobe as a gateway into another world. What is hidden inside is adventure and danger and an escape. In the play The Wardrobe by Sam Holcroft, the wardrobe is a place of safety and protection where for seven hundred years children have hidden from events in British history such as the Civil War and the plague.

Wardrobes aren’t just for clothes. People hide other things in them – secret diaries, money, forbidden things… Which brings us back to the books in the wardrobe. Was it simply a practical storage solution for my Nanna to keep her romance books in there? There were plenty of other bookshelves in the house, but they contained non-fiction and Readers Digest condensed editions. Was she ashamed of reading romance and so she hid the books away? Romance novels were hugely popular at that time and with her group of friends but perhaps they were made to feel inferior in the way that some people still look down on romance today.  Or perhaps it does come back to the sex and the swearing. Knowing that she had a curious and avid reader for a granddaughter maybe she wanted to hide the books away from me! However, finding them in the wardrobe with all those lovely clothes and the perfume and the jewellery just made me see romance books as impossibly exotic and glamorous, exciting, an escape from real life. I guess I still see them that way today.

Does spring prompt you to sort out your cupboards too? Are you prepared to share the secrets of your wardrobe or closet?  Are there books lurking on the shelves, or other things hidden away?
Posted by Nicola Cornick at 10:21 AM

You made me think of Bertie Wooster, who was invariably hiding in wardrobes. He hid in one when he was in Florence Craye's bedroom and her fiance D'Arcy Cheesewright came in and found him. And *Spindrift* to me is the name of Florence Craye's very erudite novel which Bertie was forced to try and read when engaged to her, and which Jeeves didn't think much of.

My earliest romance reading was Barbara Cartland serialised in my mother's Woman or Woman's Own magazines. I think I was about 10. I remember the hero taking the pins out of her hair so it all fell down... and he might have carried her upstairs too, but I can't be sure of that because that might be Gone with the Wind! Childhood memories are pretty mixed up.

I loved this post, Nicola. Very evocative. And you are right about the mystery and romance of cupboards. The very act of emptying a cupboard can be hugely therapeutic; those clothes you don't wear but can't bear to throw out; the old handbags and, in my case, diaries dating back over thirty years.

Wardrobes are also good places for heroines to discover things they ought not to know about...

LOL, Liz, I love all the Bertie Wooster mentions! Yes, I'd forgotten his habit of lurking in a wardrobe. So funny!

A bit like me finding those racy books, Elizabeth! Yes, there is something secret about the wardrobe and I totally agree on the therapeutic effect of sorting them out!

Very nice post. I do get the urge to spring clean, though not in the manner of my mother's spring cleaning in my childhood where every stick of furniture was taken outside and cleaned/aired while the walls, floors, windows, and doors were scrubbed. This was a very lovely post. I have a wardrobe/chifferobe, but, alas, it only contains clothes.

Thanks, Lori, I am so glad you enjoyed it. Like you, I quite like cleaning and tidying up but I'm not that thorough! Love the word "chifferobe." it sounds very exotic!

Get professional trading signals sent to your mobile phone every day.

Start following our trades NOW and make up to 270% daily.