The value of Heideloff’s Gallery of Fashion 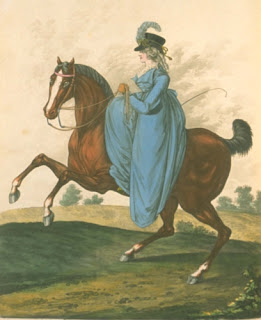 One of the most important aspects of writing historical romance is depicting the clothes. My bible is Cunnington’s Handbook of English Costume. I have the 18th century, the 19th and also the book on the medieval period. She is incredibly detailed and you get the full picture of what both men and women wore from top to toe, including changes throughout the century. It is immensely useful, but the illustrations are limited.

What helps me is seeing actual drawings of fashion from the time and my favourite of the fashion plates is Heideloff. His coloured drawings also cover my particular choice of period.

From Sacheverell Sitwell’s introduction to my book of Heideloff and Ackermann fashion plates, we learn that Heideloff’s were the first publications of coloured prints of English fashions, preceding Ackermann and La Belle Assemblée, which began in 1806. Earlier ones were French. But post the Revolution, English fashions began to predominate over French in England, and even crossed the Channel. 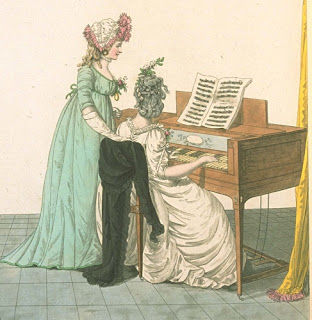 Heideloff was born in Germany, into a family of painters and engravers, but gravitated to Paris in 1784 in the service of a German duke. He left him and painted miniatures for a living. He fled to England as an émigré and in 1794 began the Gallery of Fashion, which appeared every month until 1802. Apparently there were 251 coloured plates done altogether.

What I love about Heideloff’s drawings is the fullness of the gowns, often with so much movement in them you can almost see the scene alive. 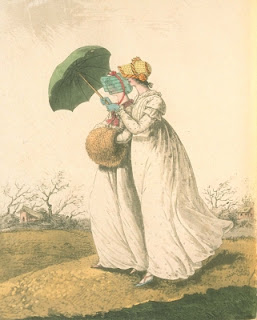 A lot of them are set in wonderful backgrounds and there are often two or three women together and sometimes children, usually doing something: reading, chatting, driving, riding, hurrying along or dawdling.

Although my book has quite a few plates, it’s not nearly as interesting as the images I’ve downloaded. There are few copies of the original Heideloff extant, but a Japanese university has very kindly put their entire collection online. You can even get permission to use one on covers for a reasonable fee. 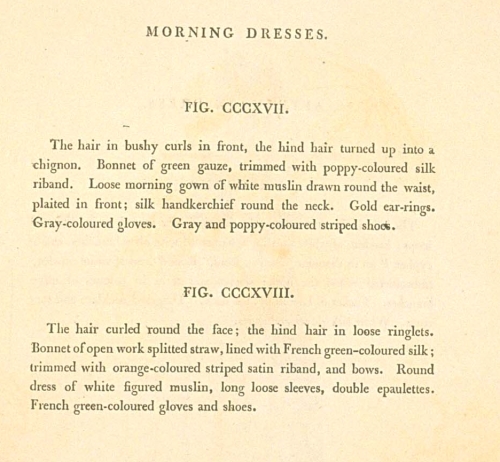 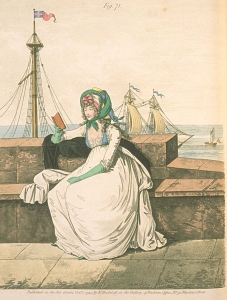 Take the image of a woman reading by the sea. It’s called Watering Place. Note the huge background scene. And if you read the description below, you can follow just what it meant by the words used. A handkerchief, for example, is not the square of linen we would suppose. That was called a pocket handkerchief. There’s “tucker” and “riband” and “petticoat” - not what we mean by the latter.

If you look at the descriptions of the morning dresses in the windy day above, you’ll see how even the way the hair is dressed is given: “the hair in bushy curls in front, the hind hair turned up into a chignon” and “the hair curled round the face; the hind hair in loose ringlets”. 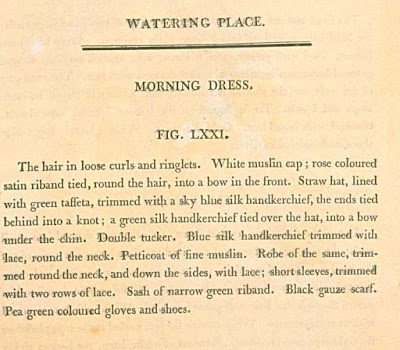 There must be sixty odd of these images I downloaded, and I didn’t do the lot. Fortunately one is allowed to grab them for personal use only, and thus my readers are treated to snippets of the real thing.

As an interesting research aside, I learned that fashion colourists did their drawings inside the premises of the modistes, from the actual clothes. As close a representation as you can get!

What a fascinating post, Elizabeth. I love the prints and the descriptions. Thank you so much for brightening up my day. I thoroughly enjoyed it.

Re: Cunningtons' 'Handbook of English Costume in the 19th century': it's true that their illustrations are in black and white, but they are all taken from fashion magazines (like Le Beau Monde'), cartoons, or images of the period. The provenance is itemized in the back of the book under 'Sources of Illustrations' - at least it is in my copy.

Thank you for another wonderful post, Elizabeth, I love the pictures you have chosen. I, too, use Cunnington as my costume bible, and love looking at contemporary illustrations - too much, because I could spend all day doing so!

I am off now to find the Japanese site, which will probably slow up my writing even more!

Thanks, both. Elizabeth, yes I know the illustrations are taken from fashion mags, etc in Cunnington, and some are even from Heideloff. Likewise the ones in James Laver's illustrated book which I also have. Both very useful. But I just love the Heideloff so much, and the descriptions are brilliant.

Melinda, let me know if you don't find the Jap website and I'll see if I can locate it. I can't remember the name of it, but I expect googling Heideloff will bring it up.