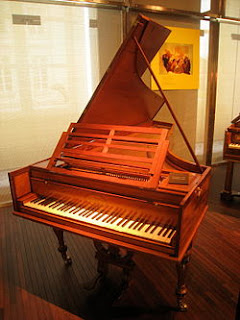 When I was writing the book that is coming out on 4th February, I had blithely made my heroine a virtuoso piano player without realising how much research it was going to demand. I knew about Broadwood pianos. Well, I’d heard of them. And of course we’ve all heard of a Steinway Grand. But this is the early 19th century, the Spring of 1806 to be exact, and here is my heroine asking for a quality piano in exchange for giving herself to a convenient marriage.

I delved. And found no Steinway, but Stein. Yes, we had Broadwood. But we also had Graf.  Who he? You may well ask. There were others, but we will content ourselves with these three as I did for the book.

Johann Andreas Stein, it turns out, was a major contributor in the late 18th century to the improvement of the piano in terms of controlling the sound and responding to the player’s touch. I won’t attempt to explain how, but this illustration shows the innovation called the Stein Action which is all in the way the key works to make the sound with the “hammer”. This is just one contraption attached to one key.

Mozart, who visited Stein in 1777, had this to say of his pianos:
... In whatever way I touch the keys, the tone is always even. It never jars, it is never stronger or weaker or entirely absent; in a word, it is always even…. His instruments have this special advantage over others that they are made with escape action. Only one maker in a hundred bothers about this. But without an escapement it is impossible to avoid jangling and vibration after the note is struck. When you touch the keys, the hammers fall back again the moment after they have struck the strings, whether you hold down the keys or release them ...

Joseph Broadwood, a British maker, founded a dynasty that survives today. (See the piano at the top.) His was the maker hand that developed the pianoforte (or fortepiano) into a piano, increasing the range to six octaves. Who knew? Conrad Graf was Viennese, and his pianos were known for effective damping of sound after the key was released. Graf achieved this result by a variety of means, with which I will not trouble you. He also had a second soundboard. This is, I am told, the surface of a string instrument that the strings vibrate against, usually via some sort of bridge. But Graf’s second soundboard “had no bridges, but simply floated above the strings (not attached to them)… its purpose was to make the sound mellower and more blended."

As if this wasn’t enough to contend with, my heroine needed music to read from in order to play. How did one get this then? Fortunately there was sheet music, but you didn’t necessarily buy it. You could borrow it, like books, from a music library. But once she has the means, Lily is only too happy to take out a subscription to the music sellers so that she may buy her own copies of new music coming out.

Yet I still had to find out who was composing then. Whose music was she likely to be able to play? I pored through lists and found some names suitable to the time and details about their styles. Eureka!

Finally, where was she going to buy this piano? Who sold them? Fortunately, I found Clementi’s in Tottenham Court Road where she could go, not only to look at pianos, but at sheet music too.

Phew! I had all I needed. Isn’t the internet wonderful? 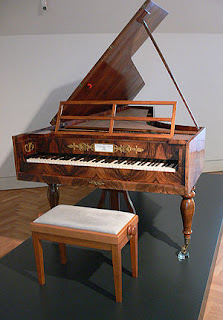 AN EXCERPT RELATING TO PIANOS
“This fellow will serve you, Lily.”
He indicated the assistant, who bowed. “My name is Driffield, my lady.”
Lily’s face lit. “Oh, thank you! I have never seen a Stein, and I have not heard of this one.” She waved at the instrument by which she was standing. “Graf? Is it German?”
The fellow Driffield nodded. “Viennese, my lady. A new name, Conrad Graf, who is gaining something of a reputation. We thought to give it a trial.”
Lily began to strip off her gloves. “May I try it, Mr Driffield?”
“Of course, my lady.”
The assistant opened the instrument, laying bare the gleaming set of black and white keys. Lily shoved her gloves at Vincent, who took them automatically, watching her slip onto the stool and poise her hands above the keys. She flexed her fingers and ran her right hand along the keys, producing a series of notes. She did the same with the left hand and then, apparently satisfied, she began to play.
Vincent was no judge, but the air Lily produced, playing from memory, was pretty and her fingers moved across the keys with ease and sureness.
“It has a pleasant tone,” she said, addressing the fellow Driffield. “Does he use dampers?”
“Indeed, my lady. And a second soundboard, which makes the sound mellower and more blended. We find these pianos to be of sturdy construction and believe they should last for years. A most promising instrument, we think.”
Within minutes, Lily and the elderly creature were deep in discussion about the rival merits of the various instruments and Vincent was utterly lost. Unknown terms battered his ears as the two spoke of the merits of five or six octaves, pedal controls and the Stein action. They might have been talking in a foreign language. Indeed, Vincent suspected much of what they said was in German or Italian.
Lily flitted from one piano to another, discussing each as she played what she called a mazurka here and a sonata there. It struck him that Driffield went from interested to thoroughly engaged, as if Lily was almost as knowledgeable as he clearly was himself.
“Well, my lady,” he said at last, “from what you have said, I would recommend the Stein.”
Lily smiled. “Yes, and I dare say you are right that it will give me the best tone.” The mischievous note Vincent was coming to know entered her voice and she threw him one of her dancing looks. “And my husband has very kindly given me permission to purchase the best piano that I can find. Only I’m afraid I have fallen in love with that Broadwood over there.”
With which, she raced across to the very first piano she had seen upon entering the showroom. Driffield followed and Vincent trailed in their wake, his interest aroused.
Lily was addressing the assistant, touching the pale wood with its decorative inlay.
“It’s so beautiful to look at, you see, apart from its tone, which is perfect. I think I would take as much pleasure from its aesthetic line as from playing it. Do you not think so?”
Driffield was deference itself. “It is a consideration certainly. But from the point of view of the sounds you will produce, I submit your ladyship cannot do better than the Stein.”
Lily looked back at the recommended piano, which was of a dark wood, rich and smooth. But Vincent was not much surprised when she opted for the other.
“No, I have quite made up my mind. I will have this one.” She smiled at Vincent. “And save my husband a few pounds into the bargain.”
Vincent waved aside this mundane consideration. “Have the one you want, Lily. The cost is immaterial.”
For answer, she sat down at the piano of her choice and played for several minutes, becoming, as far as Vincent could see, quite lost to the world. She sat with eyes upon the keyboard barely half the time, her fingers moving across the keys as if she could see them by touch alone. 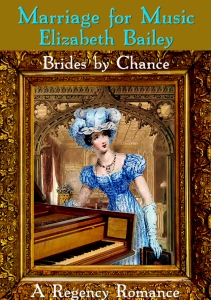 A fortune at stake if he does not marry now. Almost anyone will do.

Intrigued by the dissolute Lord Wintringham and with nothing but drudgery in store, Lily Daubney dares to contemplate his desperate offer. Sanity prevails. But Vincent’s persistence lands her in so much hot water she has no option but to marry him.

Delighted with her reward of a fine pianoforte, Lily rapidly discovers the perils of her bargain. Impossibly selfish, treading a path to perdition, Vince seems wholly irreclaimable. Is Lily’s growing desire to reform him doomed to failure? Or will her unexpected influence turn disaster into happiness?

And elsewhere
Posted by Elizabeth Bailey at 2:04 PM

I really enjoyed this, Elizabeth. A heroine is always so much more believable if the reader believes that she knows what she's talking about - and we believe that Lily knows just what to look for in a piano. You bring out her love of the piano and her knowledge very skilfully! I was completely captivated.

Oh, thank you so much, Elizabeth. I'm so glad it works! I must say I really enjoyed writing that book!

Thanks. I learned something about pianos of the day I hadn't heard before.
Love the excerpt.