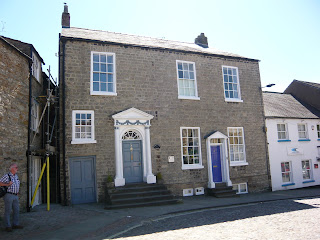 Earlier this week I took a trip to Richmond, North Yorkshire. The town is full of beautiful Georgian buildings, many of them still with original features. 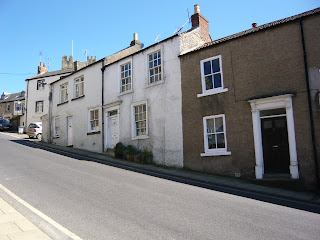 The weather was lovely and we had an excellent day visiting the castle and making our way to the top of its massive tower, from where one can see for miles in all directions. 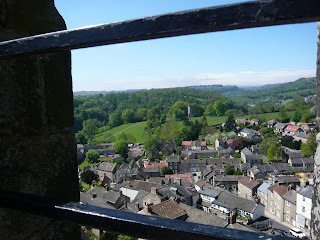 The castle is perfectly placed to defend the town and lookouts would have had plenty of warning of an advancing army. Lots of information there for my current project, a hero who owns a sham castle, known as "Duke's Folly". He is weighed down by responsibility and needs a suitable wife, certainly not the tomboy hoyden who currently lives in Duke's Folly!  Look out for this charming story in the forthcoming Regency Romantics box set, due out soon! 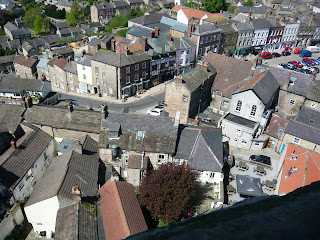 Later that day we had a tour of Richmond's beautiful Georgian theatre. It seems tiny by modern standards, and seats an audience of about 200 these days, although our guide told us in the 18th century they would cram in about 400! We sat in the boxes, where the fashionable and wealthy patrons of the theatre would have enjoyed being seen by all and sundry (being seen was so much more important than anything that was happening on stage!).  In the eighteenth century it would have been lit by candles, about as bright as it is in this photo, but they were left burning throughout the performance, so the actors had to work hard to keep the audience's attention. 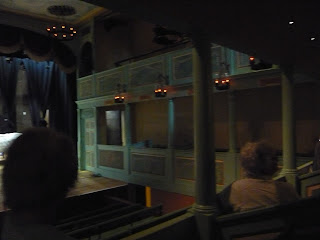 Then we went down past the pit, where the hoi polloi might have been sitting to enjoy an evening of heckling and throwing things at the actors, and down to the dressing rooms. The theatre was built by a travelling troupe and would have been "dark", or closed for most of the year until the troupe returned from the circuit (the actors walking, props and costumes taken by cart). We saw two of the three beautiful fireplaces in the theatre, one in the dressing room and one at the back of the stage, and fires would have been kindled a few days before the theatre opened, to drive off the cold and damp that would have permeated the building while it was closed up. Some of the actors might live in the dressing rooms during their stay in Richmond, so it was important that it was not too cold for them. 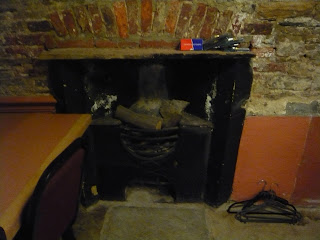 Finally, we wandered about the town, enjoying the large cobbled market place and the beautiful Georgian buildings that surround it, and while we were exploring we came upon this beautiful Emporium, and I couldn't resist a photograph, because I thought how much Miss Moonshine would have loved it. 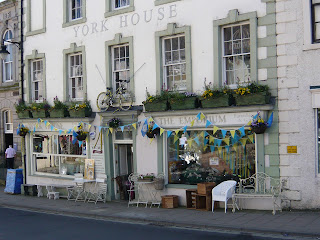 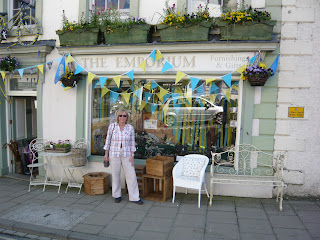 For those who haven't heard, Miss M is the main character in an anthology to which I had the privilege of contributing a short story. Miss Moonshine's Emporium of Happy Endings is published on 18th May, and includes feel-good stories from nine northern authors - a perfect read for the long summer evenings ahead.

Oh, I envy you seeing that Georgian theatre. I saw one in Sweden at Drottningholm Palace (I think that's how you spell it) which was fascinating too, with the scenery and thunder machines etc. I must remember about this one if I ever get anywhere near Richmond. Lovely blog.

I love Richmond - especially the castle but, unfortunately, I've never seen inside the theatre, and it's definitely on my wish list.

Thank you for dropping by, Elizabeth and Elizabeth! Richmond is just the right size - easy to find one's way around :-)

I have wanted to visit this theatre for a long time and it lived up to expectations. Now I want to go back and watch an actual production there - thankfully, these days there are padded back-rails and cushions on the seats, so watching a performance will be much more comfortable than it would have been years ago.

We had a weekend in Richmond a few years ago and loved it. We visited the castle but I didn't know about the theatre so will look out for it next time. And I certainly don't remember seeing the Emporium there. Lovely!

Thank you, Helen, yes Richmond was lovely, made even better by the wonderful sunshine! The theatre is a gem, and I hope to visit again and see a show there soon.

Great post and love that town and the theatre especially. Whilst I've never acted in a play on that stage, I did take the tour some years ago and, being left by myself on that fabulous stage, I did run through, but only in my head, one of my favourite speeches from A Midsummer Night's Dream whilst in that very special space. I totally was overawed to think that I was stood in the same space as some of our oldest, and famous in their own time, actors. it was amazing being there.

Wow, Angela, what a wonderful memory to have of the theatre - thank you for sharing it. I have been involved in our amateur theatre group at home and we own our own Edwardian theatre which is pretty similar to the Georgian one, although the auditorium is a little larger. I am amazed at how little theatres have changed over the years, and even today, with modern technology making it possible to have performances in huge arenas, I don't think anything can beat a good show in a traditional theatre.

I couldn't agree more. Live theatre is absolutely the best.