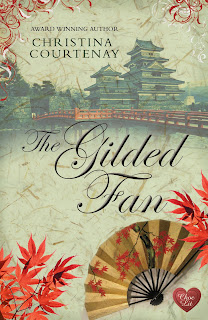 The beginning of 2013 has been a busy time for me, with two books released in e-book format within the first week of the year!

First of all, my new full-length novel The Gilded Fan came out.  It’s the sequel to The Scarlet Kimono, although it can be read as a stand-alone, and both novels are set in the 17th century, partly in Japan and partly in England.  The heroine of The Gilded Fan is the daughter of a Japanese warlord and an Englishwoman, and as a half foreigner she is forced to flee the country of her birth when the Shogun (ruler) decides to evict anyone with foreign blood.

She considers England a barbaric country and I had great fun writing about her arrival in Plymouth.  And although she thinks she has overcome the worst of her problems when she is welcomed by her mother’s relatives, she doesn’t realise that things are about to get much worse – the English Civil War is just starting!

Here is the blurb:-

How do you start a new life, leaving behind all you love?

It’s 1641, and when Midori Kumashiro, the orphaned daughter of a warlord, is told she has to leave Japan or die, she has no choice but to flee to England. Midori is trained in the arts of war, but is that enough to help her survive a journey, with a lecherous crew and an attractive captain she doesn’t trust?

Having come to Nagasaki to trade, the last thing Captain Nico Noordholt wants is a female passenger, especially a beautiful one. How can he protect her from his crew when he can’t keep his own eyes off her?

During their journey, Nico and Midori form a tentative bond, but they both have secrets that can change everything. When they arrive in England, a civil war is brewing, and only by standing together can they hope to survive …

(It will be published in paperback on 7th February.) 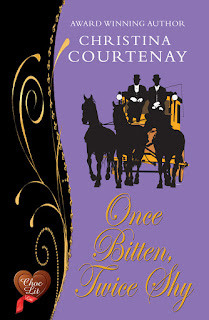 My other new release for Kindle was Once Bitten, Twice Shy, a Regency novella, which was previously published by My Weekly Pocket Novels and Linford Romance.  It features a hero who has sworn never to marry again and I have to admit I loved writing about a heroine who might make him change his mind!

Here is the blurb for that:-

Once was more than enough!

Jason Warwycke, Marquess of Wyckeham, has vowed never to wed again after his disastrous first marriage, which left him with nothing but a tarnished reputation and a rather unfortunate nickname − ‘Lord Wicked’.

That is, until he sets eyes on Ianthe Templeton …
Ianthe lives in the shadow of her beautiful twin sister, Serena and longs to escape the “mindless entertainments” she is forced to endure in London. She soon finds herself captivated by the enigmatic Wyckeham and tempted by his promises of a new life in the idyllic English countryside …

But can Wyckeham and Ianthe overcome the malicious schemes of spiteful siblings and evil stepmothers to find wedded bliss? Or will Wyckeham discover, all too painfully, that the past has come back to bite him for a second time?

Posted by Historical Romance Author at 9:13 AM

Sounds fascinating, Christina - and I love the cover, perfect for the story, I think.

Congratulations on being shortlisted for an RNA award, Christina! These books look and sound fabulous!

The Gilded Fan is a terrific story, Christina: feisty heroine, gorgeous hero, exotic setting and lots of adventure! Who could ask for more?

And the cover's just beautiful.

Congratulations on being short-listed for the RONA. A terrific start to the year.