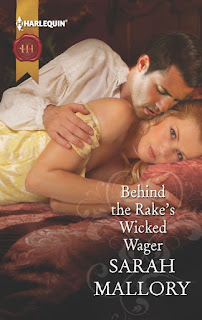 Following on from my story about scarred soldier Dominic Coale, Beneath the Major's Scars, this month sees publication of Behind The Rake's Wicked Wager, about Dominic's handsome brother Jason, Viscount Markham.

When I decided to write two books about twin brothers, I decided to make them very different.  Having twin sons myself I know that although they may look identical and sometimes they behave in the same way, they are very separate people and I wanted to get this across by creating two very different heroes.  Dominic is the serious twin and this trait is heightened by his army career and the hideous scars he now carries.

Jason, however, grew up knowing he would one day be Viscount Markham. He enjoys the trappings of privilege and being very handsome (naturally!) he comes to accept the flattery and adulation of women as his due.  Clearly this alpha male is in need of a set-down!

He meets his match in the lovely Susannah Prentess. As beautiful as he is handsome, Susannah seems immune to his charms and for once he has to resort to some pretty base tactics to make her notice him.  Of course, all is not what it seems, and they are soon leading each other a merry dance, and not just in the Bath Assembly Rooms.

I hope you have as much fun reading Jason's story as I had writing it – I wanted Behind the Rake's Wicked Wager to be a sparkling Regency comedy and I hope you will enjoy it.

Oh, and I wrote a short story about their younger sister, too - The Tantalizing Miss Coale  - what a start to the New Year!

“SO WHAT DO YOU SAY TO
THE WAGER, MISS PRENTESS? A
DIAMOND WORTH THOUSANDS
AGAINST A NIGHT WITH ME?”
No London beauty has managed to tame the incorrigible
Jasper Coale, though many have lost their reputations
trying. In sedate Bath on a family errand, the viscount
expects to find little in terms of entertainment—certainly
no female company to tempt him.
Miss Susannah Prentess’s discreet card parties in
Royal Crescent offer a welcome distraction. And the glint
in Susannah’s hazel eyes tells Jasper he’s met his match at
last. But is she game enough to accept the
most outrageous wager of all?

The Notorious Coale Brothers
They are the talk of the Ton!

Can't wait to read this as I really enjoyed the first book! You are very lucky to have twins, I would have loved that :)

Thanks, Christina - twins are hard work, but great fun, too! Happy reading