Winning the RoNA Rose - twice in a row! 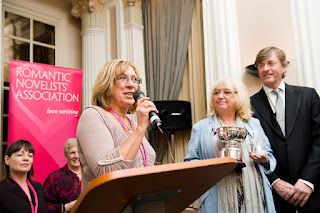 Winning the RoNA Rose award for the second year running was just astounding, and I felt like a real celebrity as I made my way through the crowd to collect my trophy and my glass star from Judy Finnigan and Richard Madeley, especially when photographers jumped out before me and the cameras started flashing!

The RoNA Rose award was instituted by the RNA in 2003 as The Romance Prize and after a short spell as The Love Story of the Year it became the much more glamorous-sounding RoNA Rose, but intention remains the same, to recognise the best in novels that centre on the developing love affair between the hero and heroine .  It is judged by a panel of readers, members of the public, and the results are kept very secret, hence the excitement and nervousness of the short-listed authors at the award ceremony.  The winner of the RoNA Rose is presented with a beautiful glass star to keep and also there is a beautiful silver rose bowl that each winner holds for one year.  When the Romance Prize was initiated, Harlequin Mills & Boon presented the RNA with the rose bowl in memory of Betty Neels, and RNA member and one of the readership's favourite authors, so you can imagine how special this is to me.

You can see from the photo that Judy very kindly held my star and my trophy for me while I made my little speech. I can hardly recall what I said at the time, but it was filmed and is now on You Tube, so I know I was there (and thankfully I kept it very short!).  Here's the link, just in case you want to see how nervous I was!

The shortlist of six novels was evenly balanced – two medical romances (both by Scarlet Wilson – how's that for an achievement!)  two contemporaries by Fiona Harper and Heidi Rice and two historicals by myself and medieval romance author Carol Townend. Having read all of them I was just incredibly pleased to be included amongst such talented writers – and I very nearly didn't enter!

Beneath the Major's Scars was published so late in the year that I was on tenterhooks, waiting for my author copies to come through so that I could send them off to the award organiser. I must say that I was relieved once they were posted off, and said a little prayer to wing them on their way.

The book has a special meaning for me, because it is one of a pair of novels I wrote using twins for the main characters.  Having twin boys myself I always wanted to use twins as heroes (or course my characters are both gorgeous and extremely handsome, but that's as far as the similarities go with my own lads!) I wanted to show that twins might look identical but they can have very different personalities, so I tried to make the two books very different – Dominic in Beneath the Major's Scars is the younger brother and as was common in the eighteenth and early nineteenth century, he was a soldier, fighting in the Peninsula until he was horrifically injured and sent home to England, where he locked himself away in a lonely house on Exmoor, shunning society.

His twin, Jasper, is very different, his good looks have not been spoiled by a sabre-cut and he loves society, of course it helps that as the rich Viscount Markham he is a very eligible bachelor. So where Dominic needs a woman to prove to him that life really is still worth living, in Behind the Rake's Wicked Wager, Jasper definitely needs to be brought down a peg or two!

So now it's back to my desk, writing my next book, but I keep looking at the two stars and the rose bowl and wondering if I can possibly top that next year. It would certainly need lots of hard work and inspiration to get anywhere near, I think, so I will continue to strive to write the best books I possibly can.

To celebrate my success, I am giving away my "twin books" and will send a copy of both Beneath the Major's Scars and Behind the Rake's Wicked Wager to one lucky person – just comment on this post and I will pick a winner at random tomorrow (Monday 4th March).  Good luck!

Posted by Historical Romance Author at 9:01 AM

Congratulations on winning the RoNA!

The covers look amazing and I am intrigued that the heroes are twins. ^_^

Thank you Tin. I wonder if they used the same model for the hero.... can't quite make up my mind on that one.

Huge congratulations, Linda! Winning two years in a row is a wonderful achievement and it's a great book!

Congratulations once again, Linda! You just have to take a photo of your two stars flanking the rose bowl!

Congrats!! Your book sounds so lovely...

Thank you, everyone - I am still floating on a cloud, enjoying the celebrations. But that will have to change next week - another deadline looming!!!

Well done -wish I'd been there to see it.

Thanks everyone for your comments. I am now off to choose a winner....

Congratulations Linda! That must have been such an exciting day!