A quite singular folly 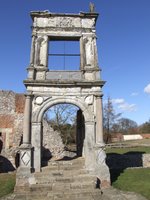 The weekend before last I went on a walk through the Earl of Verulam's estate. Past the remains of the Roman ampitheatre and fields under which would have been the Roman city of Verulanium and to some other remains: those of Old Gorhambury House. Once a grand Elizabethan house built originally by Sir Nicolas Bacon,

father of the philosopher Sir Francis Bacon, now Old Gorhambury House stands only as a complete ruin. I was surprised to learn it did not come that way purely by the ravages of time.


In the greater romantic period there was a fashion to incorporate romantic ruins in the gardens of great houses in order to provide romantic vistas when staring into the landscape. All grand houses worth their salt came complete with a 'folly' as they become known because these were artificies, constructed from scratch to look old and decayed. But some 'romantic' ruins, like those

of Old Gorhambury House, have a different story.

In the 1770s Old Gorhambury House, which had been built rather shoddily originally apparently, had become uninhabitable. Architects were called in with the intention of rebuilding, but the house was in too bad a way to save and a decision was made to build 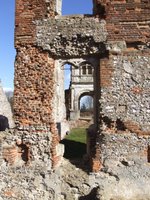 a new residence. New Gorhambury House is a grand, neo-grecian country house, commanding the landscape from several hundred yards distant from the old house. The old house was largely demolished to create a romantic ruin. From what I could see, it looked as though much of the brick was used to build the walls of an

I'm not sure how 'romantic' Old Gorhambury House looks to me. Though in the care of English Heritage, it looks lonely and neglected. I think I prefer real follies created for the fun of it.
Posted by Kate Allan at 7:42 AM

An interesting folly known as John Scott's grotto exists in Ware, Hertfordshire. Built by the eighteenth century poet, it is a series of interconnected underground chambers lined with shell, flint and glass, with a summer house perched on top. It is open to the public from April -details on their web site. It also has some interesting photos and information.

The Dunmore Pineapple is not at all melancholy and is definately 'quite singular'. It looks like a massive pineapple perched on top of a very small building: http://en.wikipedia.org/wiki/Dunmore_Pineapple

The biggest folly we have in German is the Hercules in Kassel, complete with grottos, 250 metres of waterfalls and fountains and a large park with some smaller 'ruins from antiquity'. The whole fun was built 1701-17 under commission of the landgrave Karl of Hessen-Kassel.

I've been there several times (it's only 30 minutes by car from where I live) - in summer, the park is a nice place for walks, and from the top of the building you have a nice view over Kassel and the surrounding mountains.