We'd like to welcome Mary Nichols to the blog, talking about her new book, The Earl and the Hoyden. 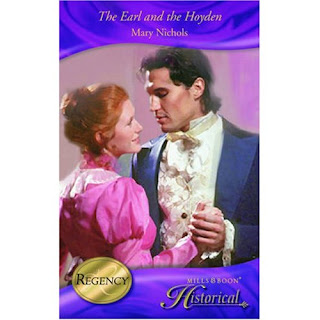 Hello, and thank you for inviting me to the blog!

Miss Charlotte Cartwright is incredibly wealthy and incredibly stubborn. She cannot forget that Roland Temple rejected her six years before, calling her a hoyden, even if he has since become the new Earl of Amerleigh and is highly eligible; let the other young hopefuls battle it out for him, for she will not. Her fight with him is over a strip of land and a lead mine to which both lay claim and until that is resolved, they cannot move forward. And Roland needs that mine. He has come back from the wars, older and wiser, to find his father dead and the estate in a parlous condition. It is going to take all his energy and resources to set it to rights and the fiery Miss Cartwright can only be a distraction…

The inspiration for this book came from a visit I made to the Snailbeach Mine in Shropshire, now a museum, although I have used author's license to site it further north than it really is. There was a time when the lead mines of Shropshire were the most productive in Europe. Mining in the area goes back to Roman times, though it would have been extracted from shallow workings. When ores close to the surface became exhausted, greater depths were explored and some of them became very deep indeed.

Mining was a hard and hazardous occupation. By the light of a candle attached to their helmets, the miners worked in gangs, usually two experienced miners, a labourer for heavy shovelling and a boy whose job it was to take the ore to the bottom of the shaft. One miner held the drill while the other hammered it into the rock and the ensuing holes were packed with explosive. Once the explosive had loosened the rock, the ore was lifted to the surface via shafts and taken in wagons to the crusher house where it was prepared for smelting by women and children working in terrible conditions. Understandably, there were frequent accidents: from flooding, from rock falls and cables breaking on the cables that lowered the men to the rock face. In spite of steam powered pumping engines to deal with the water and compressors to help with the drilling, by 1885 the competition from cheap imported ore sent the prices tumbling and many of the mines were forced to close.

This might seem a strange background for a romantic novel, but romance can be found everywhere and in my hero and heroine I have two stubborn characters who come to realise that pride comes before a fall, and fall they do, in love with each other! You can see a review of this book at http://cataromance.com/?p=1407

Thank you, Mary, the book sounds fascinating!
Posted by Historical Romance Author at 4:13 AM

Email ThisBlogThis!Share to TwitterShare to FacebookShare to Pinterest
Labels: Guest blog, Mary Nichols, The Earl and the Hoyden

Gosh, Mary, so many things I didn't know! This sounds a wonderful background for a book. Looking forward to reading it.

Hi Mary, lovely to see you on the blog and hear about the new book. I have been a big fan of your stories for years. I especially enjoyed The Incomparable Countess which is on my keeper shelf.

Hi Mary, lovely to have you here - I can't wait to read this, te background and characters sound fascinating