Margaret Dashwood, a heroine in a new book, Willoughby Returns, a Sense and Sensibility Sequel by Jane Odiwe 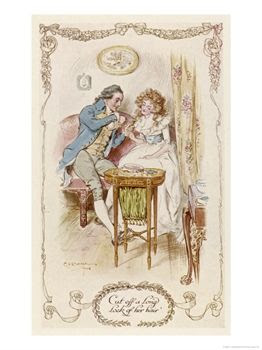 In Jane Austen's Sense and Sensibility, Margaret Dashwood, the youngest sister has a minor role. We learn in chapter one that she was a good-humoured, well-disposed girl; but as she had already imbibed a good deal of Marianne's romance, without having much of her sense; she did not, at thirteen, bid fair to equal her sisters at a more advanced period of life.

At thirteen Margaret is too young to be 'out' and we only see glimpses of her as she observes her sisters' behaviour. She does not miss a trick; telling Elinor that she thinks Marianne is engaged because she has witnessed Mr Willoughby stealing a lock of her hair. I love the following extract, which shows how keenly Jane Austen observed the foibles of the young.

Margaret's sagacity was not always displayed in a way so satisfactory to her sister. When Mrs. Jennings attacked her one evening at the Park, to give the name of the young man who was Elinor's particular favourite, which had been long a matter of great curiosity to her, Margaret answered by looking at her sister, and saying, "I must not tell, may I, Elinor?"

This of course made everybody laugh; and Elinor tried to laugh too. But the effort was painful. She was convinced that Margaret had fixed on a person, whose name she could not bear with composure to become a standing joke with Mrs. Jennings. Marianne felt for her most sincerely; but she did more harm than good to the cause, by turning very red, and saying in an angry manner to Margaret, -

"Remember that whatever your conjectures may be, you have no right to repeat them."

"I never had any conjectures about it," replied Margaret; "it was you who told me of it yourself."

This increased the mirth of the company, and Margaret was eagerly pressed to say something more.

"Oh! pray, Miss Margaret, let us know all about it," said Mrs. Jennings. "What is the gentleman's name?"

"Yes, yes, we can guess where he is; at his own house at Norland to be sure. He is the curate of the parish I dare say."

"Margaret," said Marianne, with great warmth, "you know that all this is an invention of your own, and that there is no such person in existence."

"Well, then, he is lately dead, Marianne, for I am sure there was such a man once, and his name begins with an F."

My new book, Willoughby's Return, starts three years after S&S finishes and at eighteen going on nineteen, I thought it was time to give Margaret a heroine's role. Her story is intertwined with that of Marianne's who encourages Margaret to follow her heart.

At this point in the book she is staying at Delaford Park with her sister. It is the day after a ball when she has met and danced with a young man, a nephew of Colonel Brandon.

Margaret escaped as soon as she could into the gardens outside. She made her way to the yew arbour with a favourite book, although she suspected before she had even reached the seat that she would not find time for much reading. Margaret sought solitude in order to daydream and spend her time in reverie without being disturbed from her pursuit or having to answer impertinent questions. From her vantage point on rising ground behind the house, she could see the road below, but there was nothing much to interest her there; not even a carriage rumbling by to take her notice. Opening her book she began to read, but the printed words soon swam before her eyes in a muddle. All she could see was an image of Henry in her head. Henry’s handsome face was before her, smiling with that expression, half tender, half mocking.

“I wish Mrs Jennings were right for once,” she thought, “how lovely it would be if Henry were to call.”

She twisted sideways, pulling her feet up onto the bench and wrapped her cloak around her legs against the cold seeping up from the ground. Just as she was wishing that Henry were there by her side her attention was caught by the sight of a horse being led by its master along the roadside. The man was talking to the horse, which appeared to be in some pain as it limped along. Margaret watched with her heart in her mouth as it became apparent that the young gentleman was none other than the very person she most wished to see.

From her seat, concealed amongst the yew boughs, she was quite hidden from the road. She observed him walk the length of the thoroughfare until he came opposite her viewpoint. Margaret could sit no longer and watch. Jumping up, she ran out from her hiding place and down the slope of the lawn, past the sun-dial, through the yew avenue and along the narrow path, to an ivy covered door set within the garden wall. Trying to turn the rusty key in the lock gave her difficulty and she feared she would not be able to accomplish this task before he had long passed by. At last the key turned and the door opened with a creak. She glimpsed his retreating figure and called out his name.

“Why, good morning to you, Miss Dashwood,” he answered with a bow. “What a pleasant surprise. However, I am dashed if I know how you discovered my whereabouts. If I were of a suspicious nature I might think you had been spying on me.”

Margaret chose to ignore this impudence. “What has happened to your horse?”

“I am not certain except to say he appears to be lame, a stone in his hoof, I daresay. I must get him to the farrier to have him looked at.”

“Pray tell, Mr Lawrence, where were you headed?” asked Margaret knowing that his destination must be Delaford House. “You appear to be rather far from home.”

“I came to call on you, Miss Dashwood, as you are well aware,” he answered and gazed so directly into her eyes that she could not look at him.

She looked back toward the house for somewhere to fix her eyes. “You could have the groomsman look at him, but I do not think you will be able to lead your horse through this doorway. Besides, this part of the garden has too many narrow pathways, there is not enough room for a man and his horse.” 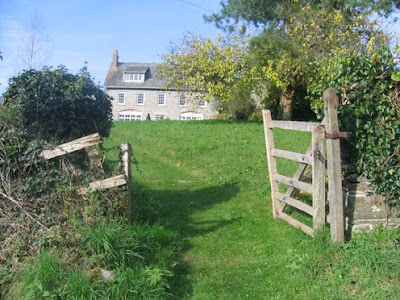 “No, but there is a post just along here where I might tie him up, so he can rest. And as you say, I could alert Jackson. I can fetch my horse in a little while, after he has been seen. In the meantime you could show me round the garden.”

“Will you not come up to the house and say how d’ye do?” asked Margaret as she watched him tie up his horse. She felt rather uneasy about having stopped him now. If Marianne or more particularly, Elinor had found out that she had behaved in such a manner, they would be shocked. Not only shocked but horrified that she had been so outspoken. And she was not sure that being alone with him in the garden would be approved of as pleasing conduct.

“I do not think that will be necessary,” he smirked. “After all, I only came to see you and no one need be any the wiser. Will you not show me round? I remember an old yew arbour at the top of the lawn where I played hide and seek as a small boy with Uncle William. Is it still there?” He smiled at her so artlessly that Margaret was instantly charmed.

“Yes, I was sitting there when I saw you. There is a capital view of the road and it is the best place in the world to hide.”

Margaret knew it was wrong but as much as she told herself that she should insist on their going up to the house, her feet immediately disobeyed her. They left their dewy prints on the rain soaked grass and climbed the ascent to the ancient arbour, Margaret conscious that he followed closely behind with loping strides. The yew arbour loomed before them, like a giant plum pudding, its entrance almost concealed by foliage. Margaret stopped just outside.

Henry swept past and was swallowed up out of sight by the giant arms of the dark yews. Margaret looked about her. What should she do? To follow him would be most inappropriate. She heard Henry call her name.

Willoughby's Return, a Sense and Sensibility Sequel to be published by Sourcebooks Fall 2009

Willoughby cutting Marianne's hair by Brock
Photo of Efford House, location for Sense and Sensibility, 1995
Drawing of yew arbour and sundial by Ellen Hill
Posted by Historical Romance Author at 12:22 AM